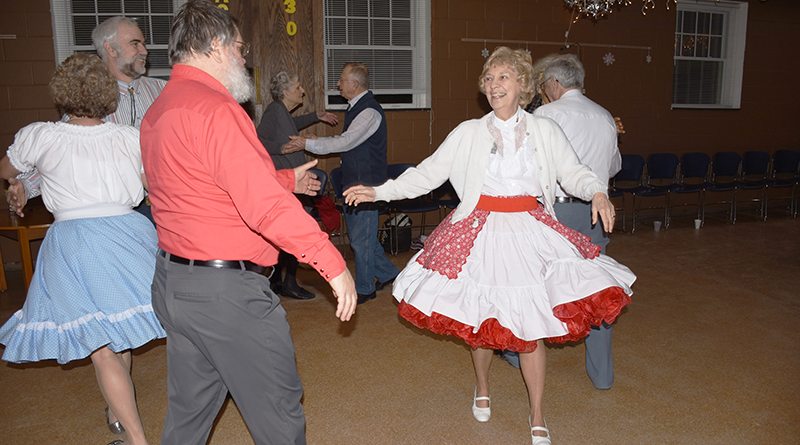 Think of square dancing and an image might come to mind. Petticoats. Cowboy boots. Lots of “do-si-dos.”

But the music of Lady Gaga probably isn’t part of that image.

Indeed, square dancing today is not what it used to be, according to local enthusiasts.

Chances are, you’ll hear “modern music — not the music you heard on ‘Bonanza,’” Debbie Blood said.

The music isn’t the only thing that’s changed. So have the outfits. Old-time garb like petticoats and Western shirts has given way to jeans, pants and skirts, she said.

The Greece woman and her husband, Jeff, go to square dances several nights a week. In square dancing, four couples arranged in a square move together as the caller shouts out different calls, or dances.

Eighteen clubs, stretching from Auburn to Buffalo to Penn Yan, belong to the Rochester Area Federation of Western Round and Square Dance Clubs. They each hold their own dance events, but club members often visit other clubs.

“You could square dance every night of the week,” said Eileen Webster, 71.

The Spencerport woman took up the activity in the 1980s when she was a single mom.

“I immediately fell in love with it and it’s been my passion ever since,” she said, noting that she met her current husband at a dance. “It’s very difficult to square dance and not smile.”

She and her husband first went to a square dance in 1979 at the suggestion of her boss. They both loved it right away.

“You can’t worry about the things going on at work. You have to focus on what the caller is telling you,” Jeff Blood, 66, said. “It would kind of give us a recharge.”

The Bloods danced for about 15 years until their careers and their kids took up more of their time. They recently retired and have gone back to dancing.

“We are now dancing two to three nights a week, and we just retired so it’s working out very well for us,” Debbie Blood said. “We love the people and we love the exercise and it’s so much fun.”

Besides being a great way to get physical, Webster said square dancing is good for mental acuity, too.

“The calls come right after the other and your brain has to stay in shape to do what the calls say,” she said. “It really helps to keep your mind sharp.”

There’s also a huge social aspect to the activity, participants said. There are picnics, special dances, and movie outings.

There are also national and international square dancing festivals. Debbie Blood recalled a trip to Washington, D.C. in which she and other attendees danced among the monuments on the National Mall.

Locally, the clubs begin recruiting in September for those interested in taking classes. The basic, or mainstream, level requires about six months of classes to learn all of the calls.

“There is a learning curve. It depends on how much you’re committed. The more you dance, the better dancer you are, and the easier it gets,” Debbie Blood said.

Webster’s advice to would-be dancers is to give it a try, noting that there are clubs for both singles and couples.

“We always tell people, ‘If you can walk and basically know your left from your right, you can square dance.’”