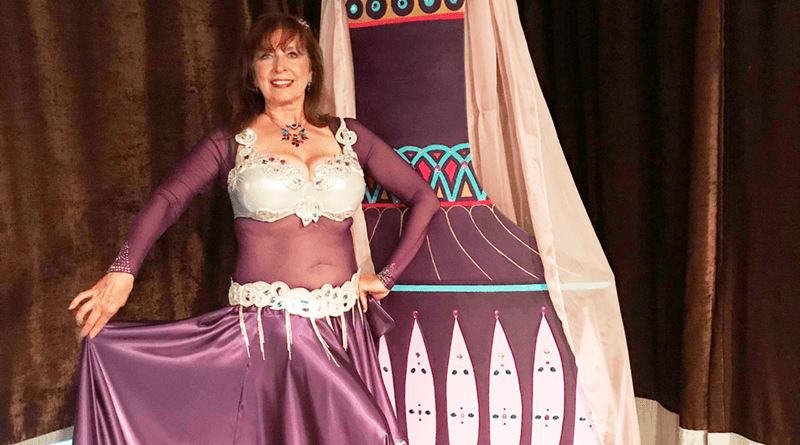 Fairport woman drawn to the practice for both fun and fitness

Belly dancers: exotic, entrancing and, in this case, a 61-year old mother of five, Debbie Robinson of Fairport.

Though not a stereotypical belly dancer, Robinson represents a growing number of belly dancers who join the activity for both fun and fitness.

“It was one of those things that was intriguing,” Robinson said. “I’d always loved dance.”

She took jazz dance through college and never too seriously.

“I never quite felt I was good enough,” she said. “My dance instructor when I was a teenager said I had potential but they were looking for thin girls. I was quite thin then but not thin enough.”

While rearing her children with husband Yves, she always missed dance classes. Then she saw a notice at a local recreation center and learned she could take belly dancing classes.

“I fell in love with it immediately,” she said. “There’s a belly dance community that I’d never heard about. There’s festivals and workshops. I took my local classes and started training with whoever I could.”

Eventually, Robinson became involved with belly dancing at age 44 at Goddess Hour Belly Dance at Kinections Dance Studio in Rochester under the direction of Michelle Charles.

“She’s an amazing and wonderful dancer and teacher,” Robinson said enthusiastically. “My hobby was sewing which is good but I’m sitting on my butt. I wanted a hobby that would get me up and moving. I got so bored with aerobics classes.”

“Boring” is definitely not a term associated with belly dancing. Beyond the exotic costumes and movements, the dance supports good health. Robinson said that belly dancing has helped with her back problems, improved her stamina, increased her flexibility and built core strength through its gyrating movements.

“We focus on pulling the belly in and letting it out and using our abs and back and moving in very different ways,” Robinson said.

“I’ve improved my balance and I think it also works nicely to keep your brain active,” she added “You have to think and work hard when you’re trying to memorize the different dance steps.”

She also finds that belly dancing helps her become more mindful, as she has to focus on how she moves her body.

“If frees your brain a while from the chatter that goes on in it,” Robinson said.

So what does Robinson’s husband think about his wife’s hobby?

“At first, he said, ‘Woo hoo, I can’t wait to see you belly dance!’ but I didn’t know enough,” Robinson said with a laugh. “One day, I was brave enough. He sat there a little embarrassed, I think, but he’s used to it and it’s normal now.”

He attends her shows to show his support.

“My kids were horrified at first,” Debbie Robinson said. “When I started, I had teenage boys that were just, ‘Oh, my! Look at what my mother is doing!’ It was a little shocking at first. Then they realized they could be as horrified as they wanted; I wasn’t giving it up. Now they’re pretty much supportive. My daughter loves it and started dancing for a while, too.”

The Robinsons have four sons and a daughter.

Robinson said that over the past few years, the age demographic of belly dancing women in the area has increased. Instead of mostly women in their teens to early 20s in the class and at the events, more in their 40s and 50s on up have joined recently — and even a few in their 70s and 80s.

“We had a lovely lady who danced with us in her upper 80s,” Robinson said. “It’s one of those things you can keep doing your whole life. There’s a lot of variation in the type of dancing you’d do. it’s a very accepting community. You probably don’t get hired out for dancing at someone’s 30th birthday party if you’re 60 but we dance at festivals. We have dancers of every size and shape and age.”

Body acceptance is a big part of belly dancing, and appreciating what the body can do.

“You can move it and be graceful,” Robinson said. “No one is pressured to have a perfect body. If you have more weight, it’s more to jiggle and it’s all good. Skinnier girls have to work a little hard to shake things.”

Robinson worked as a clerk at Clark Shoes in Rochester, but mainly stayed home to rear her children. She said that belly dance “nourishes the soul” and offers her a creative outlet, as well as a way to build her confidence.

As she has grown older, Robinson has experienced the phenomenon of feeling “invisible” to others, and as if her thoughts and opinions aren’t as valid as a younger person’s.

“I feel like doing something like belly dancing makes me a little bit harder to ignore,” she said. “I’m still a vibrant human being and I love dressing up in sparkles, sequins and beads and going out there to give it my all. If you want to watch, great, if not, OK. It makes me happy and gives me a way to express myself.”