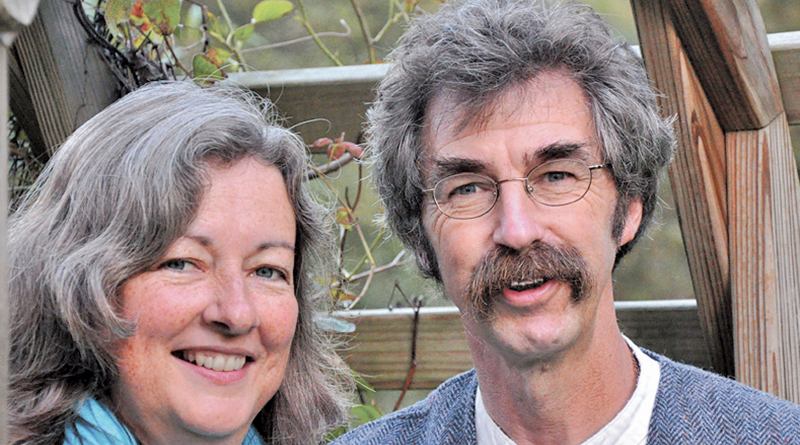 “The richness of music in New York is incredible,” said Dan Duggan of Wolcott. “We’re trying to get that music into the next generation with some history and heritage of music.”

Dan Duggan, 60, lives on a 45-acre parcel of land at the eastern edge of Wayne County that he draws breath from.

He and his singer-author-composer wife Peggy Lynn and their combined talents work hard. They travel from April through November giving performances, teaching classes, researching and developing new music. When they’re not on the road, they record their own CDs and the work of others in Dan’s studio, Esperance Productions, right there on the farm.

Peggy, 58, is a guitarist and concertina player who has a wonderfully earthy, pleasant voice. Hear one song and you can picture her pushing back on a chair on an Adirondack porch and singing at a family gathering or festival with everyone giving her rapt attention, listening to her carefully chosen words.

Dan is a championship-caliber, nationally recognized hammered dulcimer player, one whose speed and lightness on the instrument allows him to master and construct music that others can only marvel at.

Together, their mission is to save and bring the music of the Adirondack region to the rest of America. But like so many things, what’s taken for granted in the Adirondacks is a somewhat foreign and distant piece of the country’s musical legacy.

“We developed traditional instrumental programs for elementary and high school students,” Duggan said. The graduates from Duggan’s program are now in schools teaching the music to another generation, he said.

Alfred University and Bennington College have traditional music programs today. “We’re trying to pass on the knowledge we’ve developed over the years as people passed it on to us. Adirondack music came down from Canada, from the Quebecois fiddling, from the logging camps, and in our own area, from the Erie Canal,” he said.

Right now, Duggan and Lynn are fighting to keep that musical heritage afloat, especially in schools, where there is no longer room for this important part of “New Yorkana.”

“We’ve been trying to do this for years at the elementary and high school level, but the school climate has changed so much,” Duggan said. “There is so much focus on testing now. The arts in education have really taken a back seat and that’s really a change. We used to do programs in a lot more schools, but funding is down and the climate in schools is very difficult. Common Core has made it very difficult for teachers to do anything but focus on testing. There’s a lot of frustration among teachers.”

If they can’t get to the kids, Duggan and Lynn are working on everyone else. The two, with guitarist and singer Dan Berggren along, formed a group called “Jamcrackers” and give concerts in many small venues — churches, small festivals, coffee houses, libraries and museums.

Jamcrackers is the nickname for the courageous workers who broke up logjams on rivers.

They also do concerts with the Orchestra of Northern New York, and Dan teaches master dulcimer classes on his Esperance acreage. A new Jamcrackers CD is soon to be ready.

Dan and Peggy are also enthusiastic participants in the intergenerational camp for grandparents and their grandkids at Great Camp Sagamore. Here, they can reach the kids through music directly.

It was music and the dulcimer, that changed Dan’s life.

“I started playing the dulcimer back in the late 1970s. I first heard it when I was in Fredonia College,” he said. He got interested in it through Steryl and Paul VanArsdale, whose dad, Jesse Martin, had been a vaudevillian that taught his son to play the instrument chord by chord.

Dan played guitar, backing up Steryl. “I saw how dulcimers were built, taught myself, then started writing,” he said. “The college had folk weekends twice a year, brought in some big name folk musicians, and I got to play with them. It was a great community and I’m still in touch with a lot of them.”

He’s also been a member of the Susquehanna String Band for 30 years and played a concert with the band in Watertown in late June.

“The dulcimer is a wonderful instrument,” he said. “It really captured my attention. I’ve written a lot of music for it and done a lot of recordings — more than 20 CDs.”

“She had been going through a tough and difficult time with her divorce; we spent a lot of time together, and ended up falling in love. We had a wonderful relationship for four years, then got married 13 years ago.”

In 2009, Dan was diagnosed with cancer at the base of his tongue. Neck and tonsil surgery and radiation treatment put the cancer into remission, but the cure ended up infecting his jaw and breaking up his jawbone. In 2013, he had the bone in his jaw rebuilt, using bone transplanted from his fibula. He literally hurt from head to toe.

“That was quite a setback,” he said. “It left me with some issues — primarily singing and talking. I had to really work on singing — it’s a big part of what we do. Peggy has helped me through quite a lot.”

Indeed. Peggy kept bedside watch and blogged from the hospital, letting fans and friends know how Dan was doing. Peggy’s notes are written like a conversation among old friends — factual, but full of hope.

“Everybody has something going on health wise,” said Duggan. “I’ve been able to work around the cancer and surgeries. I’m really pretty fortunate. I feel a lot like I’m swallowing my tongue all the time, but I’ve really developed a way that I can speak pretty clearly and sing reasonably well. I have to work on my breathing. Now, it’s pretty much normal, just another reality.”

Peggy and Dan have together recorded some interesting records. “A Stitch in Time” is a recent CD of Peggy’s tunes and songs about quilting and the heritage of quilting. “It’s really unique,” Duggan said. So are their Christmas and yuletide CDs.

Dan’s newest CD, “For the Love of Friends,” is something he wrote during his cancer treatment and surgeries, “for all the people who supported me and my wife from the music community all over the country. It was pretty overwhelming,” he noted.

Peggy and Dan were looking forward to hosting the Esperance Hayloft week on the farm in September when 12 students visit for a weeklong master class in the dulcimer and a Sep. 16 concert in Red Creek. Peggy and Dan will also perform in a host of other venues on the East Coast between now and November.