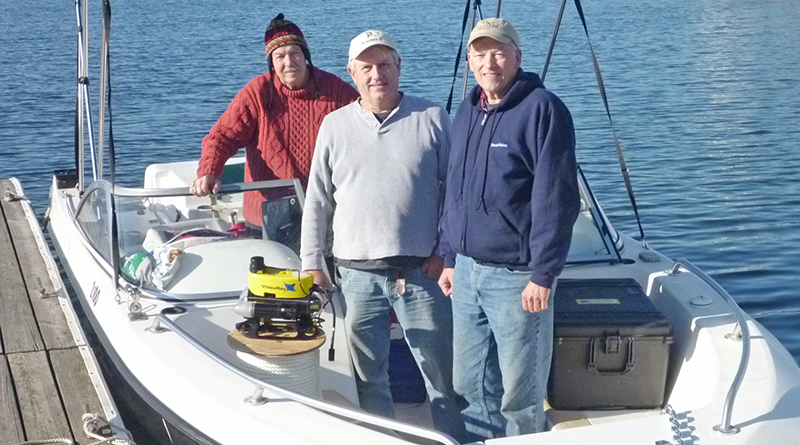 In the heart of the depths of Lake Ontario, they sleep.

Some rest on the bottom, intact, sudden victims. Others are broken, on their side, in pieces, torn asunder by more violent acts of nature.

Where they lie, the quiet and cold envelop.

But they’re not forgotten.

On the surface and off the lake, three retired men are searching, with careful, exhaustive forensic skill to find shipwrecks — and there are many — that lie on the bottom of Lake Ontario.

And they have been remarkably successful.

The three are Jim Kennard of Fairport, Roland “Chip” Stevens of Williamson, and Roger Pawlowski of Rochester. They have been together as a team for about seven years.

Kennard, 73, an electrical engineer at General Dynamics, Harris and Eastman Kodak, decided more than 30 years ago he’d like to look for shipwrecks after learning how to scuba dive. The tool he needed was a side-scan sonar system, which in 1972 cost three times the price of his home.

Two years later, he’d built his own, and still uses it.

Once equipped, Kennard went shipwreck hunting in the shallower waters of Lake Champlain, and was contracted to find sunken barges and river craft in the Mississippi and Ohio rivers.

Pawlowski, 68, also an electrical engineer with a career at Harris, is a retired Air Force Reserve pilot who flew missions in Desert Storm. He has been scuba diving for many years, all over the world. He has a boat, an underwater remotely operated vehicle, and the skills to pilot his boat in delicate, precise search patterns in the waters of the Great Lakes.

An architect and former county planner, Stevens, 76, is a nationally recognized watercolorist. He synthesizes the precise measurements from the sonar that have been corrected and verified by Kennard and Pawlowski, and blends in the videos of the mussel-encrusted wreck. He then comes up with a painstakingly accurate drawing of what the boat looks like on the bottom of the very deep Lake Ontario. Then, he adds sails and all the other accoutrements the ship would have had when afloat, and brings the boat back to life again.

“Each painting is a whole story,” Stevens said. “A picture is worth a thousand words; the picture is my story of the ship.”

Kennard and Pawlowski had worked together at Harris, knew each other, and their similar interests brought them together. A third partner, Dan Scoville, who helped find the HMS Ontario British warship in 2008, has since moved to Texas. Kennard and Pawlowski welcomed Stevens — a sailor, architect and watercolorist. “With his artistic abilities, we thought he’d be a good partner,” said Kennard.

Last August, the trio announced that it discovered the sloop Washington, which sank after foundering in a gale in 1803, en route to Kingston, Ontario, Canada, from Niagara, Ontario, Canada. It is the oldest commercial ship found intact in the Great Lakes, a boat that hauled furs and household goods to settlements.

There were no survivors.

The explorers had found the Canadian schooner Royal Albert last June. The ship was carrying railroad rails when it ran into rough waters in 1868 off Fair Haven. The heavy cargo shifted and burst the seams of the wooden craft. The crew escaped in a small boat.

Although we live close to the lake, we don’t appreciate the level of maritime trade these waters have carried. It is estimated that somewhere between 6,000 and 8,000 ships wrecked in the Great Lakes, 600 in Lake Ontario. Many burned to a shell or crashed into a dock or shore.

But many others lie in the deep, waiting.

Kennard, Pawlowski and Stevens do their searching as a hobby — a very forensically challenging and carefully crafted hobby. “Everybody brings something to this,” said Kennard. “Everybody has to be a contributor.”

“A lot of what I do is based on research in old newspapers,” he said. “Not just one. I go to the best source of information you can find.” He has created his own database, pulling information from other databases and adding his own touches.

He’s looking for details. “Where did the debris come in? Where were the winds coming from? Did people get off? Where did they come in? Are there any life-saving reports that give information? You distill it down to where you think the boat would be — that gets you in the ballpark,” he said.

“When the research is done, you make your best guess where you think a ship might be, then you go out and ‘mow the lawn,’” he added.

“We plot a course and we run a grid, based on GPS coordinates, and use the side-scan sonar (Kennard operating), which can cover 100 feet of the bottom in one pass,” Stevens said. “We run the sonar back and forth across the grid. Once we see a target, we get the GPS coordinates, go back, put the anchor down, and drop the ROV on the wreck — and record an hour of video of the wreck.”

Pawlowski is very busy while all this is going on.

“I put an autopilot in my boat. That’s very important so you can have very precise tracks, then you can cover an area of the bottom faster (mowing the lawn),” Pawlowski said. “You let the computer drive the boat. That makes a big difference.

“When using the ROV, the boat is standing still. When I drive the boat while we’re using sonar, I’m sitting there monitoring and adjusting to make sure we accurately follow our route.

“The ROV goes to 1,000 feet. We use it in deep water. Recreational diving goes down to 130 feet, anything beyond that starts to get dangerous. Typically, you don’t go beyond 350 or 400 at the most. Ontario is 806 feet deep. Some wrecks are down 500 feet, way beyond dive-able range.”

What the electronic equipment does is provide images, which then have to be checked and verified with what’s known about a certain boat’s dimensions and purpose — even its load the day it went down. Is this the boat the team is looking for or something else?

“Our measurements are very precise,” Pawlowki said.  “We take into consideration the temperature of the water, the speed of sound changes, so measurement could change. We do it quite thoroughly to show it’s actually the wreck we think it is.”

“You want to understand what’s down there, what’s hanging off the wreck, other pieces around the wreck, so when you send the ROV down you have a plan,” said Kennard. “We try to minimize the amount of time we’re on these wrecks. We’re just sitting out there. That’s part of keeping things confidential. People see us and ask, ‘There’s a boat sitting out there a couple of hours and they’re not fishing? I wonder what that’s all about?’

“We don’t want scuba divers to go down and rip off a wreck,” said Pawlowski. “We don’t do that, but there are some pretty unscrupulous people, and it’s against the law.” Kennard explained that the shipwreck-hunting teams he’s been part of are small for a purpose, and confidentiality is key. The cold fresh water will keep these priceless artifacts intact for many years to come, if they’re left alone. The team does not reveal the sites of any of their finds.

“Something we learned a long time ago is that the treasure in the lakes is the maritime history we’re discovering,” Kennard said.

But at depth, in the murk, some wrecks are just that — wrecks. And the images from radar and sonar are ghostly and other worldly.

Here Stevens steps in with his architect’s training and begins assembling pieces of a boat onto a trace-paper drawing. As more of the boat is measured and clarified on passes with the sonar and ROV, a rendering of the complete wreck is put on paper, and then he assembles a watercolor drawing of it. And, in the case of Washington, provides a lovely depiction of what it looked like under full sail — 214 years ago.

The group then takes its time to announce the find, with Kennard writing the press release and providing lots of detail about the ship. It’s based on all the research that got the trio started on the path to find that ship, which now comes back to life.

But the story isn’t over yet.

“We get feedback,” said Kennard. “Several times the great-great grandson of one of the captains of a ship we discovered has contacted me. The ninth generation great-granddaughter of Captain [James] Andrews of the 1780 British warship HMS Ontario contacted me — she lives in Toronto.”

And sometimes the contacts are amusing. “We found a C-45 aircraft that sank in 1952,” Kennard explained. “The captain ordered the crew to jump out, but the plane kept flying for an hour and 10 minutes and ended up just a few miles off Oswego, out in the lake. I heard from his nephew, who told me, ‘It was a joke in our family that Uncle Charlie probably crashed more airplanes in the Air Force than anybody else. This was not his first.’”

“Most of the boats that sank in the Great Lakes did so for one primary reason — greed. They would sail the boat way into wintertime when they shouldn’t be sailing, and the storms would take them. They would overload the heck out of them — three-masted schooners with freeboard of a foot or so,” Pawlowski said. “And they used boats way beyond their useful life. Wooden boats should last 30 years and they were still sailing for 40 years — they just got old and rotten and just sprung apart.”

Stevens, Pawlowski and Kennard are connected to the boats they seek. They spend enough time on the lake to know its dangers and its mysteries. They talk about the lives lived on those boats, the lives lost, the terror and the lifesaving successes and failures.

They have a bespoken respect for the mariners and how they met — or evaded — fate so many years ago.

Interested in learning more about the maritime history of the Great Lakes and the ships that have been found in their depths? Check out www.shipwreckworld.com.

Three Rochester-area explorers who spend their spare time searching for wrecks in Lake Ontario hit the jackpot this summer. They discovered two sunken ships. In June they found the Canadian schooner Royal Albert, which sank in 1868 off Fair Haven. Then in August they found the sloop Washington, which sank in 1803 en route to Kingston, Ontario, from Niagara, Ontario, Canada.