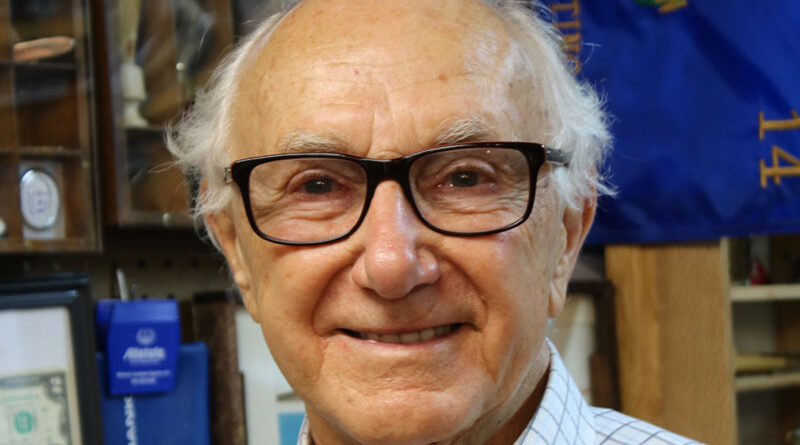 They say one man’s trash is another man’s treasure.

For Mario Arena, everything is treasure.

Some people leave the planet and there’s nothing remaining of them but the clothes in their closet and food in the fridge.

Not Arena. If it’s something he touched or thought about because it triggered a memory, he’s got it fixed onto a door, packed in a drawer or captured in a bottle.

He has taken collecting things to a new level.

Spending time with Arena, 85, is like being guided through a grove of his own making, where he celebrates his family, his friends, his jobs — and you. Make an impression on him, and sooner or later, something on one of his walls will look uniquely familiar to you.

He and his wife Nancy reside on a street of condominium houses in Webster, where every home looks pretty much just like every other. Inside, where the individuality happens, Arena holds a Ph.D. in organizing his eclectic, interesting, oddball and hilarious collection of stuff.

Stuff other people have given him.

“I am a scavenger,” he says. “I turn crap into something useful.”

And also, he confesses, “I can’t throw anything away.”

Before you think TV episodes about people who hoard, those places are trash heaps. Arena’s basement, full of “doors” and “walls,” is pristine. You could eat off the floor because he is obsessively neat and organized.

“You need some extension cords?” he asks, pulling open a drawer. “Take some.”

“How about some screw drivers?” he asks.

Another drawer opens. “Take some. Please. I have lots,” he says.

And hammers. And switches. And punches and drill bits. And flashlights.

Two years ago, the Arenas moved into the condo and after living in bigger houses, Arena was faced with a familiar problem for many empty-nesters: too much stuff. He has a photo on a sideboard from 2018, looking dismayed and surrounded by boxes and plastic containers. “I didn’t want everything in boxes,” he said.

Many of us know the feeling.

He had downsized out of a big cobblestone home in the hamlet of Merrifield in Scipio Center to a home in Penfield, and then another. In that last home, he got an idea.

Arena took items out of some of those boxes and tubs and attached them to a door — a big door. He glued on wooden signs he made. A hammer his brother gave him. A door pull. A bunch of wooden tape measures wired together. A mitre saw. An insulated work glove. An Ansco camera. A “Man Cave” sign. Three walking sticks. Tools his father used, pill bottles.

And a small sign, made with baby-bracelet white beads with a paintbrush attached to it, saying, “The object of art gives life shape,” from William Shakespeare, and that is about a tenth of what’s on that door.

When he and Nancy moved into the Webster house, Arena started decorating the basement with walls full of family photos. He covered the other side of the first door with a full mixture of tools, and he had just started going through boxes.

A 1953 graduate of Rochester’s East High, Arena went to the Rochester Business Institute for a year. When his dad died, he left school to go to work to help with the family finances. Within a year, he found a calling as an insurance man for John Hancock Mutual and a 30-year career unfolded. When he was an agency manager with a whole wall full of licenses and awards, he said, “We started noticing changes in upper management. They sold the company right out from under us.”

“I had 30 years with Hancock before they closed the doors,” he said. “Then I suffered from depression for four or five years: I couldn’t get out of bed; I couldn’t leave the house. I was devastated.”

Living in the Auburn area, Arena slowly started to find things to do. He was a skilled craftsman (one of his basement doors has an architectural rendering of a house he drew) and started to work on houses. Then he started to flip them — at one time owning 20 of them in Auburn.

He had married Nancy — his second wife — in 1970. His first wife, Josie, had given him three daughters — Donna, Jodie and Marlo. Everyone is still close.

Arena sold all his houses, bought each of his daughters a house, bought the condo in Webster, and tried to settle in after all that activity, although after a little while, he wanted to get into all the flipping again.

So those energies went into the doors, and one after another, they started going up.

His basement contains about 20 doors.

Each is meticulous in its presentation and construction. He has cantilevered them to create a bit of a maze. Knowing Arena, you can see him starting the tour with friends by pouring each one a glass of wine and leading them on, finishing the bottle by the time everything has been seen.

He has an explosive sense of humor and loves to spar with people.

Every object tells a story

Point to an object, any object, and he’ll tell you the story.

“I got all the putty knives I ever used in the houses I renovated all together and asked, ‘What am I going to do with all these putty knives?’ Then I said to myself, ‘Screw it – I’ll put them up on a board and hang them on a wall.’”

Then he asked, “Do you need some putty knives?”

Arena has a mind that needs to be active and a personality that has to be expressed and generous. He is a showman in every sense of the word, so you should expect to be entranced as well as entertained on the tour of his basement, where he does an elaborate show-and-tell on his life.

He has been a member of the Rochester Community Theater and the Rochester Playhouse — perfect venues for him. “Two professors from Cornell wrote a play about Rochester called, ‘Wish I had a Nickel.’ I sang. I danced. I performed in that show day after day, night after night. We raised money for the Rochester Fire Department.” He also appeared in “Carousel.”

“About five years ago I did the movie ‘Spiderman’ here in Rochester. I was an extra, getting paid $300 a day for 11 days. I met a lot of nice people, including my friend Aidan Baker, who is now a professional who has written stuff for ‘Saturday Night Live’ and has a movie coming out this fall.”

The Arenas have a condo in Florida where they spend part of the winter. They got introduced to a lot of nice people through daughter Donna’s in-laws, and Arena found another calling.

“Every Monday night they have bingo,” he said. “Every Tuesday night. Every Thursday night. So, I started going to bingo. Then I noticed these people are all 55 and up, so I started getting dressed up and passing out candy during bingo. I’m known as the Candy Man. His special holiday Candy Man costumes are already legendary.

He has also done commercials for St. Ann’s Home, CapTel’s hearing phones and others.

Back in the “hood” in Webster, Arena has earned the reputation as someone who can provide tools and assistance for home projects. He gets calls, he sets out desired items, and when the neighbor is done, they come back to him.

“I take care of my neighbors if they need help,” he said. “I have neighbors who are woodworkers: they have basements, but not like mine.” Seriously, who does?

His inquisitive, problem-solving mind is on display in that basement. “I don’t buy anything for my basement,” he said. “I find stuff that I already have to make stuff. I have a supplies area. I have a craft area with all my craft items — I’ve always been a craftsman.”

“When I made my first door, I thought I was done,” he said, looking around at the doors he’s erected.

“I’ve offered my collectibles to all my kids: They don’t want them. I offered my whole basement to any of my kids who want it. No one wants it. That would be the happiest day of my life if someone would take it,” he said.

Photo: Mario Arena of Webster, 85, has taken collecting items to a new level.