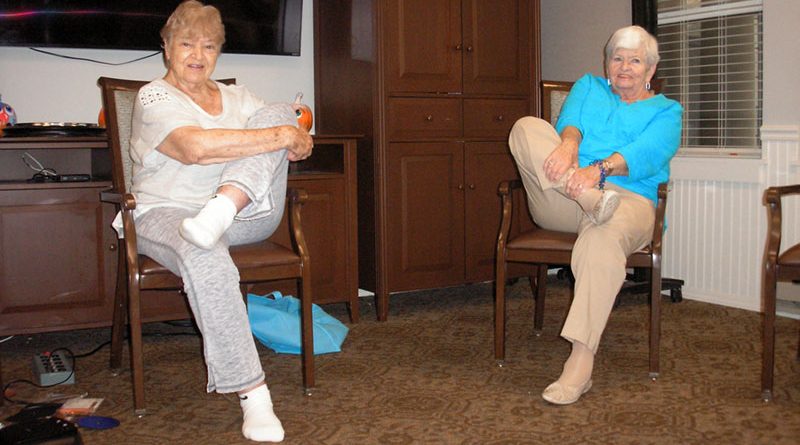 Brighton resident Mindy Rosenberg has been teaching yoga for more than 50 years. She is not about to stop any time soon, she says

After nearly 50 years of teaching yoga and fitness classes for those in their later years, Magda (Mindy) Rosenberg is nowhere near quitting.

“I have to be active,” Rosenberg says.

At 92, an age when others might need help getting out of bed, Rosenberg teaches Yoga with Mindy, her fitness and yoga class for seniors. It meets every Friday at The Gables of Brighton, a residential facility for those 62 years of age and older, where she and her students live.

Rosenberg took a long road to Brighton. She was born in a tiny Czechoslovakian farming village near the Carpathian Mountains, the eldest child of a Jewish family of seven. In 1943, in the midst of WWII, the Nazis collected them all in a roundup of Jews. The young girl was taken first to the Auschwitz concentration camp, then to Germany, where she and two of her sisters worked in a Krupp munitions factory. There, an explosion took part of her left arm, and the lives of both sisters.

As Germany’s fortunes waned on the battlefield, Rosenberg and other prisoners were forced to march from place to place to avoid being liberated by US forces. Many of them perished. Left for dead, she was found by an American soldier. No other member of Rosenberg’s family, including her extended family, survived the Holocaust, she said.

After being liberated, Rosenberg was taken to England, where she learned office skills.

“I became very good at shorthand and typing, even though I did it with one hand,” Rosenberg says.

Rosenberg was employed by a lawyer in London for a time, but remembered the Americans who freed her from the Nazis.

“When we were liberated, they just found us and fed us, and they were just unbelievable,” she says. “I figured if America produces such wonderful guys, I must come here and marry an American.”

In 1951, Rosenberg moved to the US. Settling in Queens, one of New York City’s boroughs, she continued working as a legal secretary. While at a Catskill Mountains resort, she met Coast Guard veteran Martin Rosenberg. They married two weeks later.

The couple moved to Long Beach, Long Island, where Rosenberg helped raise their four children. After the kids entered school, she volunteered to teach free fitness and yoga classes for seniors at some of the city’s residential facilities for older adults.

“I made it interesting — I brought in some familiar music,” Rosenberg says. “That’s the way it started.”

Rosenberg went on to make her living teaching yoga and fitness classes for facilities that met the needs of seniors, and to acquire a master’s degree in exercise physiology at Adelphi University. She has also authored a seminal work on exercises that seniors can use to stay fit, and deal with the effects of advancing years. First published in 1977, “Sixty-Plus and Fit Again” was essential reading in college and university courses for those learning how to help seniors exercise.

“I was a pioneer,” Rosenberg says. “It was the only book ever written on fitness for older people.”

Republished in 2015, “Sixty-Plus and Fit Again” is available online.

Down through the years, Rosenberg’s expertise in senior exercise techniques and work with older adults have gained quite a bit of attention.

She was the subject of many major articles in Newsday, Long Island’s main newspaper, has appeared on many TV and radio shows, and has written for many publications. In addition, Rosenberg is a past member of the New York State Advisory Council on Aging and the Speakers Bureau for the American Heart Association on Cardio-Vascular Fitness. She is also a staunch advocate for paying compensation to Jews who suffered at the Nazi’s hands, or their survivors.

While she might seem to be all work, Rosenberg has an easy laugh and smile, and once did standup comedy in a number of clubs in metropolitan New York. The comedy routines were her way of coping with her memories of being in Auschwitz and the Krupp factory.

“I had to do something that was so hard that I could not think about what happened to me,” she explains.

Yoga with Mindy is a chair exercise class to which seniors who have trouble standing come to limber up, increase their muscle tone or experience other physical benefits while seated. Their instructor also occupies a chair — Rosenberg uses a walker to get around. On a recent Friday, 11 people trooped into a large room at The Gables of Brighton for her class. Longtime resident Charles Hoover says the program has been good for his arthritis.

“I got arthritis in my back,” the 75-year-old Vietnam veteran says. “It’s good for the arthritis.”

Gene Martzloff, who’s been coming to Rosenberg’s class since it began, has also felt its positive effects on her arthritis.

Though Rosenberg will turn 93 in mid-December, that’s the kind of news that should keep her teaching her classes.

“I love to see people getting better,” she says.