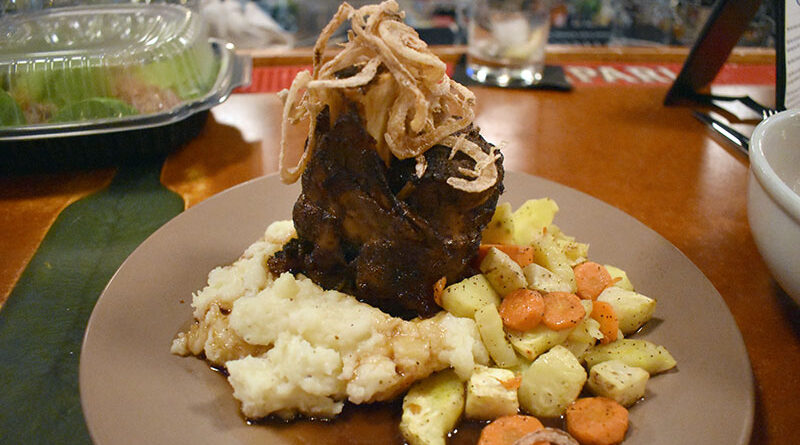 Native Eatery and Bar on 180 S. Clinton Ave. in Rochester boasts this on their website, on social media, and Google. It’s not the only restaurant to make such claims either. However, come to find out, it truly defines the description.

While entering Center City from the east, after passing under that large and confident “Welcome to Rochester” sign, Native is right there and part of the welcoming committee. The brick exterior of 3 City Center is a perfect façade to house the industrial interior of the eatery. Both the inside of the restaurant and patio are incredibly spacious, which allows appropriate dining for this strange time.

A couple beverages were enjoyed. The first was one of the house craft cocktails, the Smoke on the Water ($11). The fire water libation lived up to its name and components: mezcal, plum gin, luxardo barrel-aged peychauds (bitters), and orange bitters. Its presentation was as straightforward as it was delightful. I may have muttered or sang, “A fire in the sky,” after taking the first sip audibly enough to be heard by those within an earshot.

The second was Three Heads Brewing’s dark lager ($7). The Rochester brewery’s Dunkel-style lager is as warm as its color. The medium-bodied brew is incredibly flavorful and the toasty characteristics paired well with all the pork consumed at this meal.

Speaking of pig, the pork tacos ($13) and lettuce wraps ($15) were the two appetizers of the evening. The latter (and lighter of the two) came out first. Four giant, durable leaves of Boston lettuce sat on the plate. Strategically placed in the center of each was a pile of shredded chicken, pico de gallo, candied nuts, and chipotle aioli. For those not wanting to enjoy tacos, this is a vibrantly flavorful — healthier perhaps? — alternative.

The pork tacos, surprisingly, are less expensive than the lettuce wraps. Three generous tacos make up this shareable dish. These tacos are heavy. They’re so stuffed that they need two tortillas to hold the cola-braised pork, slaw, pickled jalapeño slices and sour cream. The pork wasn’t dry. The slaw boasted a slightly mild kick and teamed up with the hot pepper for a sweet heat.

When moving to the entrees, I have to admit this is the first time I’ve wanted to order and eat every single one of the options on an entrée list. Sometimes I’ll say, “I’ll take one of each,” to whimsically joke about how all the dishes sound delicious and still not discredit the restaurant. This time, it was said with 100% seriousness. In a perfect world, all of Native’s entrees would have been served to me that evening.

The second item on the list, the seared salmon risotto ($24), was ordered with a distinct vocal timbre, like an announcement of victory. The pile of risotto was tinted blood-red from the beets. On top of the rice pile sat a generous, hearty fillet of salmon. Sauteed kale sat proudly atop the fish like the cherry of a sundae. On the side sat a couple slices of pickled candy cane beets and salmon skin cracklin. Yes, the skin of that salmon fillet stood proudly upright in the risotto, just like a flag. Combined with the garlic and pieces of shallots, this entrée was outstanding.

The porter-braised pork shank ($24) was next on the list. The hunky pork sat in the middle of the plate, surrounded by veggies and whipped potatoes. Frizzle-fried onions decorated the pork like medals on a military hero. This pork was dignified. Paired with the dark lager mentioned earlier — delicious. The two beer styles, the smokiness of the porter and nutty lager, proved to be a wonderful team. Although the meat did fall right off the bone, it was teetering toward the overcooked side. When combining a bite of the pork with the veggies and the potatoes, everything felt right with the world.

Before tip, the bill came to $101 and change. It was a perfect amount of food, high quality meals, and the very friendly staff didn’t have to roll me out. Plus, a doggie bag of leftovers made it back to the house. Kudos to Native for allowing a clean, safe environment. 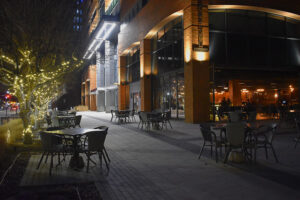 Photo: Native Eatery’s porter-braised pork shank ($24): The hunky pork sat in the middle of the plate, surrounded by veggies and whipped potatoes. Frizzle-fried onions decorated the pork like medals on a military hero.