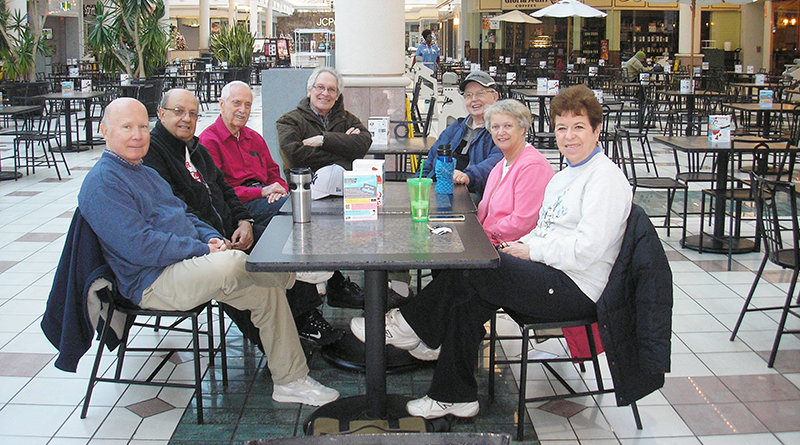 “I have been walking this mall since 1980,” the 76-year-old Walworth resident said, before heading off for his regular morning sojourn around the upscale shopping center.

Walking has long been recognized as a valuable form of exercise that can help people stave off the effects of advancing years, remain limber, and generally enjoy life more.

Though cold weather might dissuade some folks from taking to outdoor trails, some Rochester-area residents regularly seek put on the miles at local malls. Eastview, which sits less than 20 miles southeast of Rochester, attracted about 30 indoor hikers one wintry Tuesday.

“People are welcome to walk at any time the mall is open,” says Mike Kauffman, the mall’s general manager. “While most people do so in the morning, we do have walkers that come throughout the day.”

Though a few younger folks headed off to Eastview for exercise that November morning, most who appeared were people over 70.

Helen Crown put on the miles in Florida malls before moving to this area. For about the past 12 years, the Farmington resident has headed to Eastview most weekday mornings to hike its 1.2 miles of corridors.

“It gets your day started,” the 74-year-old said. “You sit around, you get kind of stale.”

After the early morning hike, Crown sat down with her fellow walkers at Eastview’s food court for coffee and comradeship. Across the table from her, a husband and wife, both 70 years old, talked about the time long ago when they decided to head out to the mall to exercise.

“I think I got him out,” Ada Curtis said of her husband, Floyd, as he grinned.

“My wife had been exercising,” Floyd explained. I was looking for a means to continue the exercise, and something that my wife and I could do together.”

That was 10 years ago, and the Pittsford residents have come back ever since.

Ten years might not seem like much to Raymond Anderson, who began walking Eastview’s corridors regularly soon after the place opened in 1971. Enjoyable though it might have been to course past trendy shops and restaurants in those days, Anderson also had other reasons to do so — his cholesterol level was way too high. Since he wasn’t into running, he headed to Eastview to bring that down.

Off by their lonesome far from the food court, Tommy Cook and his wife, Cheryl, were wheeling 11-month-old Ada Coyne, their granddaughter, past darkened stores waiting to open. They — he’s 62 years old and she’s 60 — walked malls in their native South Carolina for about 14 years before moving to the Rochester area. For about the past year, they’ve enjoyed hiking through Rochester-area malls.

Eastview, which is open from 7 a.m. to 9:45 p.m., is one of three local malls owned by the Wilmorite Management Group LLC that welcome hikers, according to Kauffman. The other two are The Marketplace Mall, in Henrietta, and The Mall at Greece Ridge, in Greece.