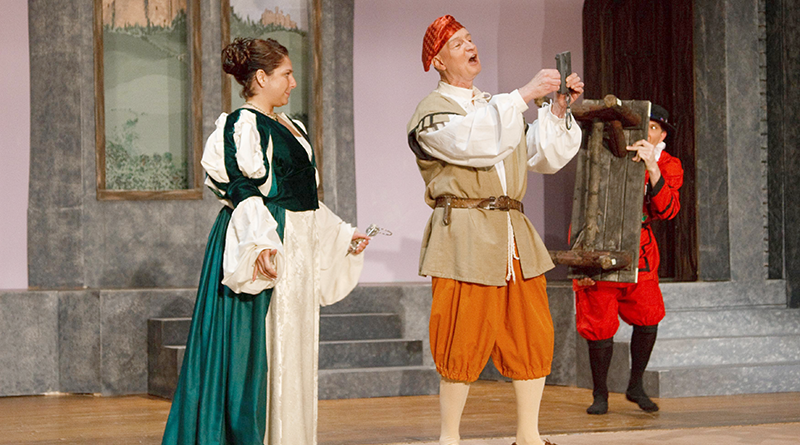 Age is only a number at Off-Monroe Players

I’ll probably continue doing theater as long as I’m physically and mentally up for it,” says Albert Young, the 58-year-old president of the board of directors of the Off-Monroe Players.

Young is just one of the many people who have helped make the Off-Monroe Players (OMP) a mainstay of Rochester’s theater scene.

The troupe exclusively presents the comic operas of Gilbert and Sullivan. This May, Young will appear in the title role of “Thespis,” which depicts what can happen when humans try to take over for Roman gods.

OMP was founded in 1977 in a church on Rochester’s Rosedale Street, at the corner of Monroe Avenue — hence its name. The troupe outgrew that location by about 1996, and moved to its current home at the Salem United Church of Christ on Bittner Street.

Nowadays, OMP performs two Gilbert and Sullivan shows each year, complete with live music, for free. The troupe consists almost completely of volunteers — only its music director is paid. OMP supports itself with the donations it receives at the door and from a group of loyal patrons. Shows often fill every seat in the hall — and then some.

Age is only a number at OMP, where about 35 percent of the troupe’s 134 active members are at least 50 years old. Many in the troupe have come in year after year to do everything from painting sets to directing productions — and most in the troupe perform multiple tasks.

Kathleen Moore first mounted the stage for OMP almost 21 years ago, as a member of the chorus of “Iolanthe.”

“I got to dress up as a fairy and be silly,” the 63-year-old says. “It was just totally fun right from the start.”

Not that every Off-Monroe Players production has gone off without a hitch. While Moore was working on one set, a couple of other workers came a bit too close with a pipe.

Though she was only out for a second, the incident hasn’t been forgotten.

“Now it’s a running joke,” she says. “Remember when we hit Kathy on the head with that iron pipe?”

Down through the years, Moore has continued to be active in OMP while holding full-time jobs, including that of associate provost of the University of Rochester. Upon leaving that position, she founded CastleView 3D, a one-person firm that creates 3-D architectural renderings of structures. While serving her clients, she’ll mount the stage again in “Thespis.”

Wayne Vander Byl and his wife, Anne, got their first taste of community theater many years ago, when they joined The Gatesinger Company Ltd., a theatrical troupe that’s based near their Williamson home. Anne once played The Wall in the troupe’s production of the musical “The Fantastiks.” The character is mute.

“The wall was a good role for me,” the 66-year-old retired bookkeeper says. “I’m not a soloist.”

The pair have acted and worked behind the scenes on many other works, including the Gatesingers’ annual Gilbert and Sullivan productions. Wayne assumed a new role when the director of “The Gondolier” dropped out two weeks before auditions were to begin. His work as a lawyer, the years he spent directing a church’s choir and his experiences on the boards all came into play when he began directing.

“I had experience with directors, so I knew what they did that I liked as an actor, and didn’t like as an actor,” Wayne says. “I thought, well, ‘I can do this.’”

The show had one problem: the only performers able to play the two gondoliers in the title roles were women.

“We costumed them as men, painted on mustaches, had them play it as men, and they did a remarkable job,” says the 68-year-old retired attorney.

Even their two kids got involved in the troupe — at least, until marriage or graduate school drew them away.

The couple brought all those skills with them when they joined OMP back in 2005. Anne, who worked on costumes for the Gatesingers, often helps create those needed for OMP’s shows. She put her needle and thread to work for “H.M.S. Pinafore.”

“We had to have bathing suits — the old-fashioned, bloomer type,” Anne explains. “I enjoyed doing that.”

Nowadays, Anne spends most of her time for OMP working behind the scenes — she’s the costume coordinator for “Thespis.” While Anne directs the sewing of togas and other clothing for the production, her husband will learn the role of the Roman god Jupiter.

Young is looking forward to playing the title role in the production “Thespis,” the head of the theatrical troupe. He and his group offer to take over for all the gods on Mt. Olympus, who have grown old and tired.

“We’ll take over for a year — you guys go on vacation,” Young says, describing the humans’ offer. “And, they proceed to screw everything up.”

About 11 years ago, Young was casting about for something to do after his youngest daughter left for college. He decided to try amateur acting.

“One thing that’s really great about the Rochester community in general is there’s a lot of opportunities for people who are interested in being involved in community theater,” he says.

Since he joined OMP in 2007, Young has enjoyed his time before the footlights.

“I particularly like the stage because it has immediate feedback,” he says “I can express myself in ways that I can’t do publicly, and I enjoy that.”

In addition to acting in OMP productions, Young has spent five years as president of the organization’s board, and holds down a full-time job.

Though Moore, the Vander Byls and Young all admit that they enjoy being part of OMP’s productions, the principal attraction of the group extends beyond the stage.

“It’s become like a family,” Moore says. “I stayed probably just as much, if not more, for the people as for the shows that we do.”