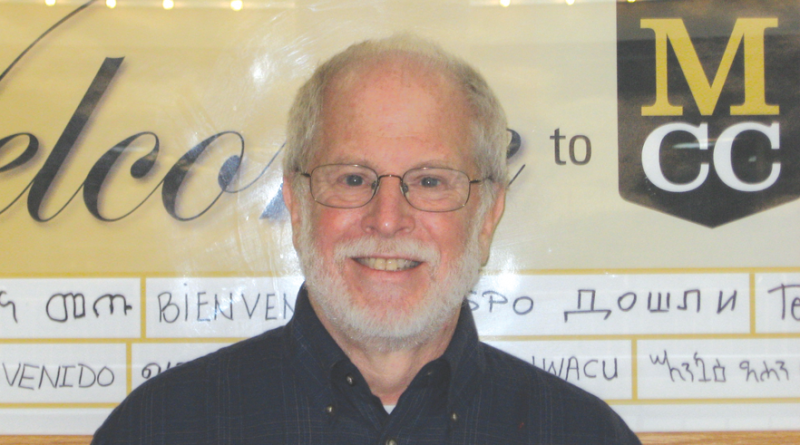 Sitting in a college classroom as a student when you’ve got nearly 40 years on your youngest peer can be intimidating – but, Brad Freeman of Rochester has two words: Challenge accepted.

Freeman grabbed his figurative pencil and notebook to head back to the classroom in the fall of 2008 after retiring from Xerox.

Now in his 12th semester at Monroe Community College, Freeman can do quite a few things he could never do before — design a website and speak French top that list.

Will he really need to parler Français any time soon, you ask? Absolutely. Perhaps the next time he visits his son in New Brunswick, Canada, where the locals are bilingual, or when he goes skiing in Québec, or maybe on that trip to Paris he’s planning.

“I’m having an amazing time,” Freeman said of his time at MCC.

But the best class he’s taken so far is an English class on writing from his own personal life experiences, which he completed this past fall. The last English course he took was his freshman year of college in 1970.

After receiving his bachelor’s degree from Washington University in St. Louis, Freeman went on to complete his master’s degree from Villanova University, and completed some courses at the University of Pennsylvania. After decades in the workforce, Freeman retired from cubicle work at Xerox.

He is now one of many folks who have taken college courses through the State University of New York’s Senior Citizen Auditor program. Many two- and four-year SUNY schools offer the program to anyone 60 years and older. The best part? The courses are free of charge. Senior auditors do not have to pay tuition fees, but must pay for textbooks and course material as well as parking permit fees.

The only drawback is senior auditors have to wait to register for courses behind paying students. By the time those students have registered, a space may not be open, so the senior auditor will have to wait until another semester to take that course.

Freeman recommends senior auditors keep a running list of interesting courses they may pull from in case their first choice is full. The auditor can then just work down the list until he or she finds an available course.

While senior auditors don’t receive grades for their coursework, they walk away with the same tools and knowledge any other student would.

Initially, Freeman paid out-ofpocket for the courses he took since he wasn’t yet 60 years old. Once he hit the milestone birthday, he enrolled in the program, which he dubs New York State’s best-kept secret.

Another jewel Freeman has found in the classroom: the diverse student population. He’s met a fair share of military vets, folks from all over the world including a woman from Haiti whom he spoke to in French, and people whose jobs were downsized by the recession.

“MCC is the most diverse place I’ve found in Rochester,” Freeman said. “You’ll see people from all over the world. It’s also diverse in age.”

The senior auditor program has been offered at MCC for more than 30 years, according to Cynthia Cooper, spokesperson for the college.

“I can say, for MCC, the program further diversifies our classrooms with students with extensive life experience. For the auditors, the senior audit program provides an affordable opportunity for continued learning,” she said.

“I especially liked being around the youthful energy of the students,” she said.

Henzel began auditing classes at MCC in 2005 when she was 63 years young. In her first semester, she took a course in advanced French cinema.

“I was a French major at Georgetown University, and [the class] was very stimulating for me,” she said.

She also enrolled in a Piano 101 course – a class she took two more times after that first semester, “In fall 2005, I had never played an instrument, didn’t know where middle C was on the piano, and could not read music, so I learned a lot.”

Learning doesn’t have to stop just because age happens. Retirement opened that door for many folks like Joyce and Freeman.

“Learning is just part of who I am,” Freeman said. “This has been a better impact on my mental health than anything else.”