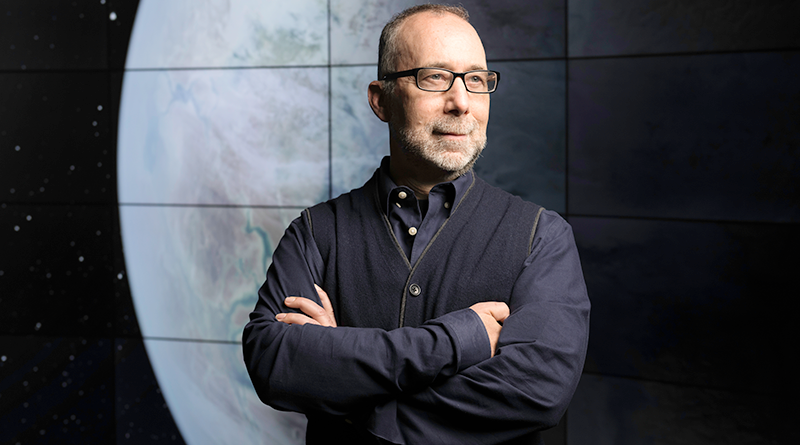 Brighton man preaches the virtues of exploring The Great Unknown

It all started for Adam Frank with pictures of space travel on the covers of pulp science fiction magazines. “It was all those images of other worlds, and the vastness of space,” the 56-year-old says. “It just completely blew my mind.”

Those dramatic depictions of spacemen and women, rocket ships and new, mysterious worlds helped send that young boy on a journey all his own. Frank is now a University of Rochester astrophysics professor who researches the formation and destruction of stars, and he is the author of four books. The Brighton resident’s latest work examines climate change, the most serious problem facing humankind, from a cosmological perspective.

We should have expected climate change,” Frank says. “Any civilization that arises on a planet that develops our kinds of capacities will have feedback on the planet.”

The self-styled “evangelist for science” has also penned op-eds for The New York Times, been interviewed on WXXI-AM 1370’s popular Connections talk show, written for National Public Radio, and traveled the country speaking about topics of critical importance to the future of this planet. Not bad for a kid from Belleville, N.J.

“Publications like Analog Science Fiction and Fact, and The Magazine of Fantasy and Science Fiction have long grabbed readers with their colorful depictions of what could be. Frank, the youngest of three children in his family, was 5 years old when he first spied the covers of his late father’s pulp magazines. Jerome Frank was a science fiction fan.

“One was guys in these sort of Michelin-tire-man space suits, the bubbly ones,” he says. “They’re on the moon and they’re kind of looking down over the valley. I can still see it.”

The images led the young boy to look beyond his hometown and the troubles he went through while growing up in the 1960s. Belleville was largely Italian-Irish back then, and Frank’s mother had divorced his father and married an African-American. Altogether, the town was a tough place for a Jewish kid to grow up in.

“There just couldn’t have been more strikes against me,” Frank says. “I had a lot of friends when I was growing up — great people — but there was a considerable amount of racism and anti-Semitism.”

Faced with such difficulties, his thoughts turned skyward.

Jerome’s gift of a book of science fiction stories fed that desire to look beyond Earth.

“They were all short stories from the golden age of science fiction, from the ‘50s to the early ‘60s,” Frank says.

Frequent visits to New York City’s Hayden Planetarium with his father further fueled Frank’s interest in the heavens. There were models of Mars and the Moon, dioramas of the surfaces of other planets and other exhibits —including scales that told him how much he would weigh on other planets.

Though he knew little about Albert Einstein, Frank spent hours at an exhibit at the planetarium that included a bust of the theoretical physicist and some of his equations on general relativity.

A chance thunderstorm helped turn the young boy’s curiosity about space into an interest in the sciences.

“I remember being terrified, and my dad gives me this really cogent explanation of what thunder and lightning is,” Frank says. “It taught me the value of science.”

Interest in science and the stars eventually helped Frank choose an academic direction.

After completing an undergraduate honors study of the theory of relativity, Frank stood before the Hayden Planetarium’s Einstein exhibit once again.

“I’d been looking at that since I was 5 years old, and now it’s, ‘Oh, my God, I know what those equations are!’” Frank says. “It was a pretty cool moment.”

After acquiring a Ph.D. in physics, Frank went on to the University of Rochester, where he is now a computational astrophysicist.

“My group uses supercomputers to model or simulate processes like the formation of stars from clouds of gas, or stars blowing up — things like that,” he explains.

While others might think that scientific investigations are dry, Frank has retained his passion for them down through the years and for what they can reveal.

In addition to researching and teaching, Frank enjoys riding his mountain bike, backpacking and hiking, and has climbed about seven of the Adirondack High Peaks. Local trails, like those of Mendon Ponds Park, are a particular source of pleasure.

“Mendon Ponds is the gift that keeps on giving,” Frank says. “I’ve been hiking there for 20 years, and just the other day, I found a new trail.”

In addition to enjoying the outdoors, Franks listens to music, swing dances, watches plays, and in other ways partakes of the local arts scene, sometimes with his wife, Alana Cahoon. Though they married two years ago, they’ve been together for nine. Frank is also the father of two grown children from a previous marriage.

— Likes to read comic books, particularly those drawn in the Japanese style
— Many breakfasts consist of yogurt mixed with granola and blueberries.
— Studied the writings of the great scholars of religion, philosophy, and mythology before writing “The Constant Fire: Beyond the Science vs. Religion Debate.”
— Prefers to hike alone and has backpacked part of the Appalachian Trail solo
— Calls his wife, Alana Cahoon, his “best friend”