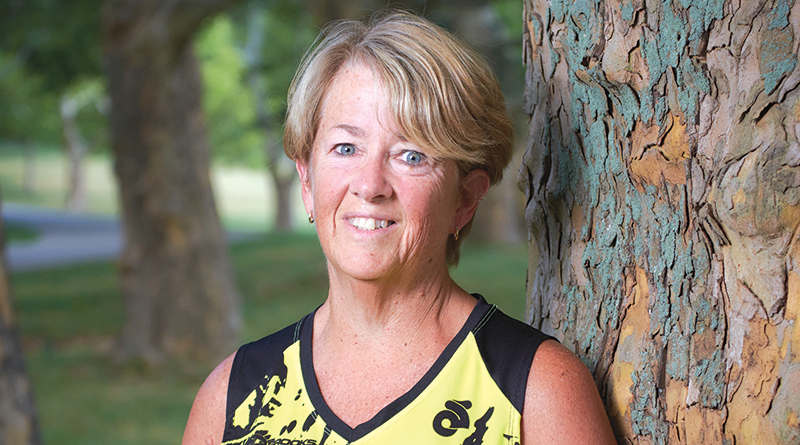 Although David Coyne, 64, of Avon doesn’t run the 115 miles a week that he used to when he was younger, he’s still running several marathons, half_marathons and triathlons every year.

And just because he’s not running 115 miles a week doesn’t mean he’s kicking back with his feet up on the couch.

Instead of running every day, he works in cross training, biking, swimming or a workout on the elliptical machine.
And some days, he’ll take an eight-mile run in the morning, at 5:30 a.m., so he can fit it in before work, and then bike 25 miles after work.

Besides cutting back on running miles, Coyne said as he has grown older, he’s started occasionally taking Arnica pills and sometimes, ibuprofen. “But, I try to stay away from the pills,” he said.

All that cross training, plus having his three children grow up and move out, got him back into triathlons after a 35-year break.

“With the cross training I was doing, I decided to get back into them,” he said.

However, two of those marathons don’t officially count since he didn’t register.

“Back in the early days, my brother went to college in Boston and he said, ‘Hey, why don’t you borrow Mom and Dad’s car and come to Boston and we’ll run the marathon’,” Coyne said.

Now that this year’s Boston Marathon is over, Coyne is training for several triathlons, marathons and half marathons.

“I’m ready. Training has been going well for as busy as I am,” said Coyne. He co-owns New Way Equipment and Pool Center with his brother, Alan.

He spoke with 55 Plus in late June, one of the busiest times for the pool business.

After the early summer pool season is over, Coyne said he picks up the intensity level of his training.

Often, his early morning pre-work workouts are with his friend and training partner, Tom Jarvis.

“He’s a great training partner. If you’re planning to meet somebody, he’s always there. I guess I’m always there too,” he said.

He also trains with his girlfriend, Kim, who is joining him for several of the races. “We train together as a couple and we’re having a blast. We make it a lot of fun. That’s what life is about,” he said.

Coyne’s running career started as a freshman in high school.

He started out the year playing football. “I was 135 pounds. I was playing third string,” he said.

His older brother, Bob, was running cross-country and doing well, so the younger Coyne decided to give it a try. It’s the same brother who would later convince him to join him for the Boston Marathon.

“I found out I was pretty good at it. I ran hard and practiced every day. I found I could keep up with the top runners,” he said. “And I was having fun. I’m still having fun.”

Often, if you see a runner in a long endurance race, you expect to see the pain of that race on his or her face. Not so for Coyne. “Typically, if you see me, I have a big smile. I’ve always been able to feel relaxed, feel comfortable with myself and run at a good pace,” he said. “It’s a God-given talent. I’m lucky to have it.”

Coyne was on two of the Avon teams that won four Section V titles in a row.

After graduating high school, Coyne went to Monroe Community College. He practiced with the cross- country team, but couldn’t compete in any of the races because he had a job on the weekends with the United States Postal Service.

After he graduated, he kept running with the Rochester Track Club. “A lot of guys I was running with were some of the better runners in the country,” he said.

Beyond the enjoyment he gets from running, Coyne said he also likes the community that follows the sport.

For Mary DaSilva, 69, of Brewerton, the community around running is a key attraction.

“Ultra-marathon runners are a pretty close-knit community. I’m extroverted and like to be around people. I love the community,” he said.

It’s a community that extends beyond the course.

When runners come to the Syracuse area, DaSilva hosts them in her home. She’s hosted runners from New York City as well as Bogota, Columbia.

For DaSilva, running has also been a good way to stay connected to people and keep her busy now that’s she’s retired from Lockheed Martin.

“Once you retire, all of a sudden all the long days you put in are gone,” said DaSilva said. “You have to have something to keep you going.”

DaSilva had played softball into her mid 50s, but stopped in the late 1990s.

“I’d had a headache in the back of my head for four months straight, 24 hours a day,” she said.

She went to a doctor and found out she had a meningioma brain tumor. She stopped playing softball and for about six years, the brain tumor didn’t give her any problems; she just needed an MRI every year to keep an eye on it.

“When I was getting wheeled into the operating room I was thinking, ‘Wow, I might not come out of there.’ It gave me a whole outlook on life,” she said.

Soon after she got out of the hospital and returned at work at Lockheed Martin, her boss hosted a meeting with a motivational speaker from Fleet Feet. After the meeting, her boss, who was a runner, announced he was starting a lunchtime running club and invited everyone to join him.

“I was the only one who showed up,” she said.

“I kept coming in first in my age group,” DaSilva said. “That kind of kicked in my competitive nature. It was time to move on to something more challenging.”

That’s not to say that 5Ks are not competitive, said DaSilva. But, she said she wanted to push herself and try longer distances.

These days she runs ultra-marathons, which is anything over 26.2 miles and up to 100 miles. Sometimes there is no set distance and instead runners compete on how many miles they can run in a set time, like 12 hours.

“I held that record until last year when someone beat me by less than half an hour.”

DaSilva will turn 70 in September and hopes to set the record in the 70-to-74 age group in May, once again at the Mind the Ducks race.

Sometimes ultras are continuing loops on a set course, which was the case for the Mind the Ducks race where she set the record.

But DaSilva’s favorites are trail courses.

“You’re running through the woods and the scenery is beautiful. You might see a deer crossing your path. It’s a tougher course, but it’s a more enjoyable one.

I just love being outside.”

The races that are just continuous loops do have advantages, she said. Friends, family, other runners and the race volunteers all pack the course, DaSilva said.

“They’re all right there cheering you on so it’s easy. I shouldn’t say it’s easy; it’s just that the way the race is set up, you’re motivated to keep going,” she said.

For the trail runs, on the other hand, you see runners at the aid stations throughout the course and there’s not much of a crowd, she said. It’s more of a challenge to stay motivated.

“It’s mental challenge but I found a phrase I like in a book I read — ‘Pain is temporary, pride is forever,’” DaSilva said. “I love being out there, as painful as it is.”

In addition to the ultra-marathons, DaSilva is in a local Syracuse track league where she is a sprinter. “Usually you’re either a distance runner or a sprinter at my age, but I do both,” she said.

DaSilva has also run marathons, but she prefers the longer distance ultra-marathons.

“I think it’s easier to run an ultra then a marathon. In a marathon, you’re running all out for 26 miles,” she said.

With an ultra, however, you need to pace yourself, she said. And you need to stop to eat and drink water.

Deborah DeMott, 62, is a relatively new runner, having started just six years ago, but it’s become a passion.

“I’m addicted,” she said. “If I don’t run for two or three days, I start to go through what I feel is like withdrawal. I can’t explain it; my legs are like, ‘All right we need to do something’.”

“It’s like if you need to have a piece of chocolate every day. I have to go run,” she added.

Beyond the physical benefits, DeMott said running is therapy for her.

“It just allows me to take a deep breath and deal with all problems of the day,” she noted.

She works as a nurse manager for Rochester Colon & Rectal Surgeons.

Community is also a strong draw for DeMott.

“Rochester is a very supportive environment no matter what your speed is. You don’t have to be an elite runner,” DeMott said.

Being a part of the community is what keeps her going, she said. “I am blessed to have the ability and opportunity to engage in these activities and surround myself with an amazing community of runners,” she added.

The team is open to all ages and ability levels. It promotes commitment to training, supporting each other and giving back to the running community.

“It’s just another way to surround your self with individuals of all abilities and share one’s strengths in supporting each other,” she said.

Six years ago, the last of DeMott’s three sons moved out and she was looking for something to keep her busy.

Her niece-in-law told her about the Winter Warrior training program at the Fleet Feet store.

“At first, my main goal was to meet people and get to point where I could run a 5K. It just kind of evolved from there,” she said.

She’s always been athletic, but prior to six years ago, she hadn’t had much experience with running.

“When I first started, I couldn’t even run a mile without stopping,” she said.

Now, she runs marathons (26.2 miles) and half marathons (13.1 miles) as well as other endurance races, including long-distance relays.

Whether it’s bracing subzero temperatures in a blizzard or sweltering 90-degree heat, DeMott said there’s a sense of accomplishment when the run is finished, which helps make the anguish during the run worth it.

“I guess I feel like it’s a victory when I get through a tough, blizzardy day when I would otherwise would be just sitting on a couch doing nothing. I love the challenge,” she said.

However, DeMott said she prefers those cold temperatures of the winter runs as opposed to the heat of the summer.

DeMott said she enjoys running solo, but also as part of a team.

“It’s something you can do with family,” she said.

In 2011, DeMott and her youngest son ran the Marine Corps Marathon together, in celebration of him returning home from a tour with the U.S. Marines in Afghanistan. They’d made a pact they would run the race together before he left.

Last year, the pair were part of a Rangar relay team in the Adirondacks, where a team of 12 splits up 200 miles. “It’s about 36 hours of running between the 12 of us,” she said.

This year, DeMott recruited her 6-year-old granddaughter to run a 5K with her.