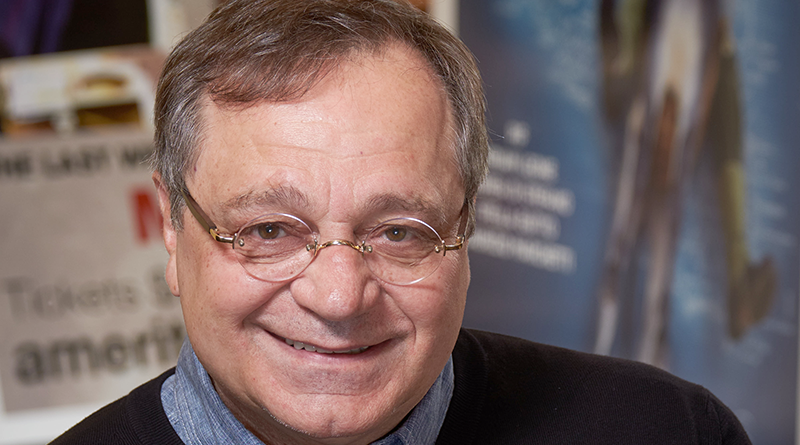 Tony Mangione’s bid to bring Italian films to Rochester could be the plot of a movie. “It was an adventure,” the 71-year-old Perinton resident says in the accent of his native Italy.

Unfortunately, when the first scene opened, Mangione had no idea how to get to the end of the picture.

“It was like running a train, and putting the railroad tracks after you find out where you’re going,” he says. “I had no idea what I was doing.”

Don’t worry — this flick has a happy ending. The Italian Film Series celebrated its first anniversary in April.

As a child growing up in Turin, Italy, Mangione spent countless hours in one of the city’s 100-plus movie theaters.

“I didn’t have anything that was geared toward me,” he says “I had to go out and seek it.”

Foreign films gave him a window on the world far beyond Turin, as he sailed the high seas with the likes of Burt Lancaster and fought alongside John Wayne in the Pacific. For an only child without many toys, it was magic.

“I took my mother’s broom, and I would go down the Amazon River as a paddle,” he explains. “I watched the ‘Sands of Iwo Jima,’ and I took the broom and I stood, put it on the balcony, and I was shooting down an airplane.”

Even the jungles of Africa proved irresistible. A matinee showing of a Tarzan movie turned into a marathon — Mangione sat through the Johnny Weissmuller flick four times.

“At nine o’clock, my parents came to grab me out of the theater,” he says with a grin.

When Mangione was 14, his parents brought him to Rochester, where his mother worked as a seamstress and his father as a woodworker. These days, Mangione and his wife of 46 years, Sharon, visit his native land at least once a year.

“We’re just feeding the box office, and the creative spirit is kind of disappearing,” Mangione asserts.

The dearth of Italian films in the Rochester area left Mangione frustrated. Flicks from all over the world come into local homes via Netflix and other vendors, but few make it to the big screen.

“We’re one of the very few countries that doesn’t have international movies,” Mangione complains. “There’s an Italian festival in Beijing, for God’s sake!”

On one visit to Italy, Mangione viewed a film that led him to take on a third career — as a purveyor of Italian films in Rochester. “Perfetti Sconosciuti” (“Perfect Strangers”) brings seven friends together for dinner. On the suggestion of one of them, they play an intriguing but ultimately unpleasant game in which they share everything they receive on their cell phones. The 2016 comedy-drama was a critical and commercial success.

Spurred by the challenge, Mangione began searching for “Perfetti Sconosciuti’s” distributor. After he reached the right Italian firm, his train fell off its tracks: a U.S. studio wanted to buy the rights to the film, and remake it for an American audience. After protracted negotiations, the distributor turned Mangione down — just five weeks before his film series was to begin.

And, a scramble it was. Mangione searched all over for another Italian film to screen. Distributors were very reluctant to let him look at their wares.

“I don’t have any box office history, because it’s the first one, and I’m only going to show it one time, once a month, in one theater,” he says.

Finally, a company in Rome offered Mangione the chance to pre-screen some of the films it sells. One caught his eye. “Neve” (“Snowscape”) is about two strangers who come together on a drive, one seeking the loot from a heist and the other trying to escape her life.

“I was very intrigued about the simplicity of the story, the lack of special effects, the lack of violence, car chases, explosions,” Mangione explains.

Mangione agreed to buy the right to screen the film once, but hit another snag: The sales company couldn’t provide a Blu-ray disk of “Neve.” DeBergerac Productions, Inc., a Fairport firm, agreed to download the film to disk, but the 14-hour process failed twice. Each time, the sales company in Rome turned off its computers at the end of its eight-hour workday, cutting off the download.

After that was straightened out, “Neve” was ready for its Rochester debut. About 135 attended the screening — not at all bad for a Tuesday night event that was largely advertised by word-of-mouth. Since then, Mangione has presented one Italian film each month at the Little.

Nowadays, Italian film distributors regularly give Mangione access to their catalogs. Some even give him screening rights to first-run films, including those being shown at the Cannes Film Festival and other prestigious film industry events.

Though Mangione carefully selects the films for his series, each screening is more than a night at the movies.

“I wanted to make it what’s called in Italian a ‘serata,’ an evening,” Mangione says.

Those wishing to view a film are encouraged to socialize beforehand at the Amore Italian Restaurant & Wine Bar by Wegmans, on Rochester’s East Avenue. Following the screening, they can head to Branca Midtown, a downtown Italian restaurant, to discuss the film. Though the evenings have a distinct Italian flavor, they draw all kinds of folks from around the area.

Though Mangione’s films are well attended, he hasn’t made a profit from the series — yet. Not that that bothers him.

“If I can break even so it supports itself, I’m fine,” he says.

In the meantime, Mangione finances the Italian Film Series with money from his company, Delta Strategies, and the support of local businesses and organizations. Wegmans, Persuasive Communications and DeBergerac Productions, Inc., are all among its underwriters. 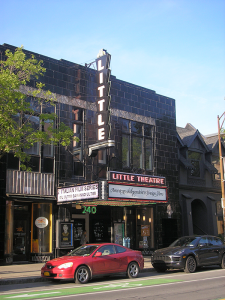 “Gli Ultimi Sarrano Ultimi” (“The Last Will be the Last”), the latest offering in the Italian Film Series, recently drew about 15 people to the Amore Italian Restaurant & Wine Bar inside Wegmans East Avenue in Rochester.

There, the smell of Italian food and sounds of friendly conversations fill the air.

Louis DeCarolis was there with his wife, Cindy, and several of their relatives. DeCarolis, the information technology director for DeCarolis Truck Rental, Inc. has been to four of the series’ films.

“Tony (Mangione) puts up such a variety of films that we’re anxious to see what’s next,” DeCarolis says.

Cindy has been a film buff since she was a small child.

“I love the spoken language, so I love listening to foreign films,” she says.

DeCarolis Truck Rental is one of the Italian Film Series’ sponsors.

Colleen Roof came to Amore right from her job in Victor. For Roof, the film series offers the opportunity to spend an evening each month away from her husband and family. In addition, the Italian flicks are quite different from most American films.

“There’s a lot more layers to them,” the Newark resident says. “Plus, I love listening to the Italian words on the screen, and just being immersed in that other culture.”

Allison Leet has known Italian Film Series creator Tony Mangione since they both worked at General Motors. She and her friend Paula Fletcher have seen every one of its flicks but two.

“These films have just been delightful,” declares Leet, who is from Victor. “Fun, dramatic, poignant — it’s just been one to look forward to every month.”

For Fletcher, the artistry and generally slower pace of foreign films are big pluses.

“It’s different from the U.S., Hollywood films, which are a little bit too much stimulus for me,” the Greece resident explains.

Once dinner was over and the wine glasses were empty, all headed off to the Little Theatre, where the viewing area was about two-thirds full. After the lights came up, some folks headed off to Rochester’s Branca Midtown to finish out the evening.