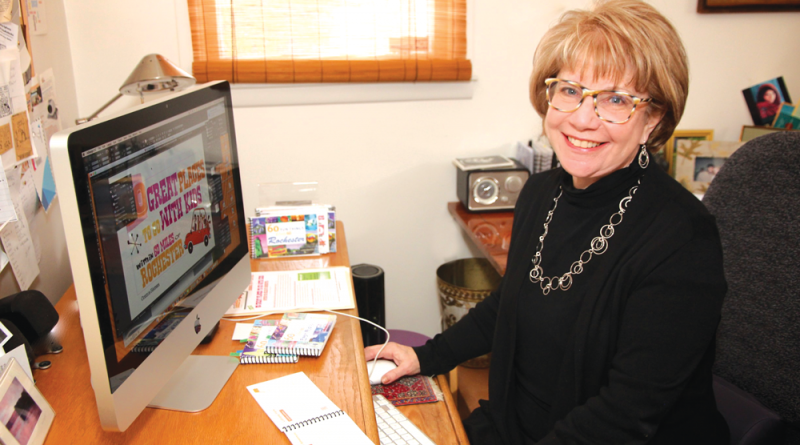 Author guides residents, visitors to most exciting venues in the city

“I think people are looking for places that are delightfully surprising, not too far away, aren’t overly expensive and are accessible for those with mobility issues.”
Connie Herrera.

Her mother’s statement, “I would be happy living out of a suitcase,” influenced a new career for Connie Herrera decades later.

From road trips as a child to her travels to 19 foreign countries and all but five states, her love of travel grew. She thought she would like publishing and majored in publications at Simmons College in Boston. True to her dream, her first job was as an editor in the University of California, Davis Publications Office.

Next was a move to Rochester to work in the private sector. She then pursued another love: marketing higher education at Monroe Community College for two decades as director of marketing communications.

“When I moved to Rochester, I was expecting it to be a bit boring because I’d grown up outside New York City and lived for many years in California’s natural beauty.  But I soon realized that this area combined the best of both: cultural treasures and beautiful scenery. Still, I found that most Rochesterians just didn’t appreciate all that was here. I think that’s true of most places —the world is always more exciting somewhere else.

“I started collecting places to go, and decided that an hour was the most anyone really wants to spend in their car, especially with kids, so 60 miles was my limit. I had the idea for a local guide when I first moved to Rochester, but it took 15 years to get the book finished. What held me back was that although I’m a reasonably good writer and designer, I couldn’t do either well enough to please myself,” she said. “So I decided to hire a writer, Rosanne Rivers, who was freelancing at the time, and a designer, Dona Marie Bagley, and let them set the tone and look of the book.”

“I loved what they came up with. I never could have done that myself,” she added. In 2010, she launched her first guide, “60 Fun Things to Do Within 60 Miles of Rochester.”

Her next book was published in 2013 and focuses on Palm Springs, Calif. “I have a sister who lives near Palm Springs, and I love the desert. It just made sense.   There’s so much to do in the desert, but most people just see the golf courses and swimming pools.

“I chose Buffalo as my third book because my partner, Walt, is from Buffalo, so I’ve spent a lot of time in the Queen City.”

A conversation with a home-school parent gave her the idea for “60 Home-school Fieldtrips Within 60 Miles of Rochester” in 2015 and a branded edition for a client, “Miss Cynthia’s 60 Learning Adventures for Kids Around Rochester & Buffalo” was also published in 2015.

Her newest book is “60 Great Places to Go With Kids Within 60 Miles of Rochester.”

“I like the breadth of the ‘60 Fun Things to Do Within 60 Miles of’ books, but realized that in today’s market you need to focus on specific audiences rather than general ones,” she said. “Parents and grandparents are always looking for something to do with their kids. And if it combines fun with learning, that’s even better.”

Her kids’ book includes some of the same material as the other books, such as museums and historical sites, but also adds sports, parks and spray parks, flea markets, libraries, and more nature and animal-focused attractions.

Herrera decided to self-publish because she had experience in print buying and production, but admits she had no idea then how difficult it is to sell books.  “I think now I should have done some more investigating to look for a publisher, but then I would have lost control and the ability to update the books every year. My biggest challenge is that my skills are not on the sales side, and that’s what you need to do. Fortunately, Wegmans and Barnes & Noble both agreed to carry the books from the start, which gave a big name behind it right away. I also had great support from local stores, like Simply New York and Eleventh Hour Gift Shop and museums like the George Eastman Museum, Susan B. Anthony House & Museum and Jello-O Gallery,” she said.

“I miss the collegiality of a workplace and going in every day.  But I love doing the research and visiting so many cool places, meeting the volunteers and staff, and always learning new things. I also love talking with the owners of the stores that sell my books, except that I always seem to end up spending my profits before I leave,” she added.

When asked, Herrera suggests that if someone wants to start their own third stage of life business, they should begin before they actually retire. “See if you really like doing as a business something that may have been a hobby. Self-publishing is good for anyone who has ideas, and there are so many ways to sell your books or crafts or whatever you come up with.  But if you want to make a lot of money, come up with a book that can be sold across the country, or around the world. It’s a much bigger audience than a locally focused book,” she noted.

Some final thoughts from Herrera: “When you read my books and you’re new to the area, I want you to be astounded at your luck in moving here. If you’re here for a visit, I hope you’ll want to come back again to do more. And, if you’ve lived here all your life, I hope you’ll be surprised at how many places you haven’t yet explored and how many you want to visit again.”