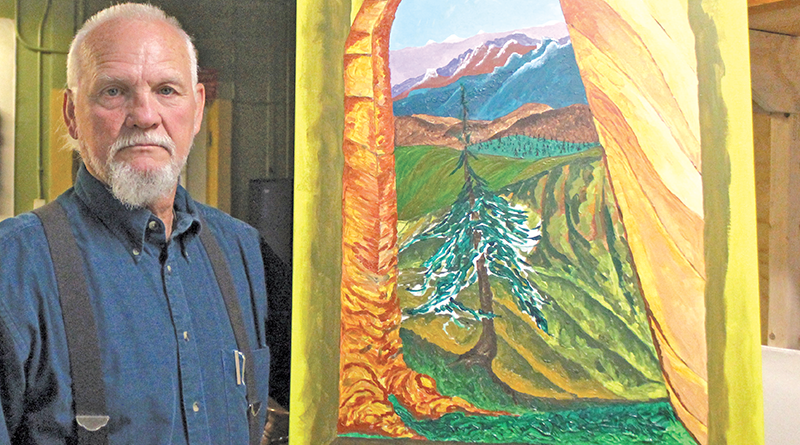 John Henry Green, 67, wanted a place in the Canandaigua area to show his art, to teach classes in form and composition, and to offer workshops in sustainable living and alternative energy production.

Suzanne, his wife, wanted Green to be happy. When he got his studio, she wanted to have space in it to lead Bible studies and enjoy Christian fellowship.

Together, they wanted to host seminars and schedule experts in solar energy for the home, root cellars, sustainable living, earthworms, orienting your new building, and preparing for next spring’s garden — and lots of other stuff.

What is Green’s training?

He got drafted during the throes of the Vietnam War. But he didn’t go to Vietnam.

“I took the piece of paper that was my draft notice to the Air Force recruiting station,” Green said. “I asked the guy leaning up against the wall, ‘Hey, I got this draft notice. Are you guys recruiting anybody?’ He said, ‘Let me see that paper.’”

He needed money because he had met Suzanne in a vivid “101 Dalmatians” dress, working in the men’s department at JCPenney in Fairfield, Calif.

“I was working there, temporarily,” she said.

“After I met her, I found that I needed a lot of socks and T-shirts. I can remember to this day that ‘101 Dalmatians’ dress and the platform shoes,” Green  said.

“He came back three or four times,” Suzanne said. “I liked his honesty and his eye contact. We communicated right away.”

Green took an internship at the Mare Island Naval Shipyard in San Francisco. “I needed to make babies and needed health insurance,” he said. He worked on nuclear submarines. That mechanical ability was again useful.

“The Lord gave it to me,” Green said.

Suzanne had just finished her registered nurse studies at Santa Rosa Junior College and was an operating room nurse. Then the Greens started to move.

Green had started in mechanical engineering work, but graduated to electrical engineering. “I had wondered how come the electricians made so much money because they were so clean,” he said. After that, he went to nuclear engineering school. “I was working on nuclear fast-attack subs. Great job. Great machines.

“The Navy was excellent to work for. Excellent. I was really confident in anything they put me to because I knew if I had a question, I had all of the U.S. Navy behind me.”

When Mare Island closed, Green was sent to Yuma, Ariz. as a weapons developer and test director. Then he became a construction project manager and finally, he was shipped to Aviano Air Force Base in Italy.

He worked to bring the airport up to 2000 Federal Aviation Administration standards, and spent time in the Azores working on the technical aspects of a $200 million breakwater project. The location was an emergency-landing site for the space shuttle and Air Force One.

Suzanne traveled with him. She was the director of nurses at the Yuma Surgery Center, and a program manager for the Air Force in Italy.

The Greens came back to New York and the Rochester area in 2008. John Henry worked in construction management for the General Service Administration, renovating courtrooms and offices. Suzanne was an operating room nurse for Lindsey House Surgery Center and the Linden Oaks Surgery Center.

Along the way, Green, 67, dabbled in things beyond work.  Suzanne, 61, said, “All our life together, he has been designing and building homes that were self-sufficient.”

Ahead of his time

“I also did some playgrounds, a Montessori School in Willits, Calif.,” he said. “They had communes in California in the 1970s. I volunteered to help people put together their building project, how to do recycling of buildings and houses and barns, and when we got enough materials stockpiled, I designed a structure for them using what they had available.”

“He was 30 years before his time,” Suzanne said.

The couple has 11 acres in Bloomfield and Green is, as Suzanne describes, clearly torn between his art in the Canandaigua studio and the tractor in Bloomfield.

Originally, Green wanted to build a cigar lounge with a studio attached. He had built the humidor for his friend Gary Liotta’s shop, Santiago’s Cigar Factory, in Rochester. John Henry and Liotta found the place in Canandaigua, but neighbors objected to the intended use.

“There were editorials in the newspaper,” Suzanne said. “The school is right down the street; it’s a residential area. John Henry could have gotten the permit, but rather than starting out on a negative footing by pushing in a cigar store when most of the people didn’t want it, he changed his plans.

“His goal was to have a place to display his art anyway, so we decided, let’s just move ahead and open the gallery and studio.”

That happened on July 4 of this year — the couple’s 37th anniversary.

Green is strong in color and substance. His metal work is pristine, and he likes to combine materials and draw strength from each. He paints. He sculpts. He photographs.

“This has been great,” Suzanne said. “This has been a dream of my husband’s. I’m just enjoying it. I know how much he enjoys this. He enjoys the solitude. I’m here to do bookkeeping and the website. I do all the surround stuff. I’m very happy and so thankful we have the opportunity to do this now in our lives, something that hopefully becomes profitable. But our focus is that we’re both strong Christians, and this was a place we wanted to open for fellowship.”

Green holds classes for people starting at high school age, where every artist starts with a drawing and ends up with something in color. Green stresses form and composition first.

And when he goes home, his environmental strengths flower. “I put in photovoltaics [solar panels], just under 9 kilowatt hours, and I’ve got a geothermal greenhouse. I put in some ponds, planted a vineyard, got some big old gardens, and I make compost,” he said.

His bachelor’s degree was in fine arts and included alternative energy design. Couple that with his sustainable practices experience, the extremes of engineering training he’s received, his project-management skills, and John Henry is an expert adviser to people getting ready to build an energy-comfortable home.

The couple has three grown children, all doing their own thing with some success. John Henry Jr. is a specialist in hazardous waste programs at Warsaw Hospital. He’s John’s son from a previous marriage. Aaron Green, a Cornell grad, is the assistant manager of the vineyard at Silver Thread Winery. Magdelynn Green is in Beaver Creek, Colo., and is an activities director.

“My kids had to go out on jobs with me,”Green said. “Kids are never bored around me because I always have extra shovels.”

What Suzanne said about Green love of solitude rings true. The studio is a quiet place, a reflective presence. You walk in the door and you have to shrug off whatever you were carrying.

Where is Original Green

You can check out John Henry Green’s artwork and photos, upcoming sustainable living workshops and art lessons and sessions on Original Green’s website, originalgreendesign.com, or call the studio at 585-698-7740, or stop in at 335 N. Main St., Canandaigua.