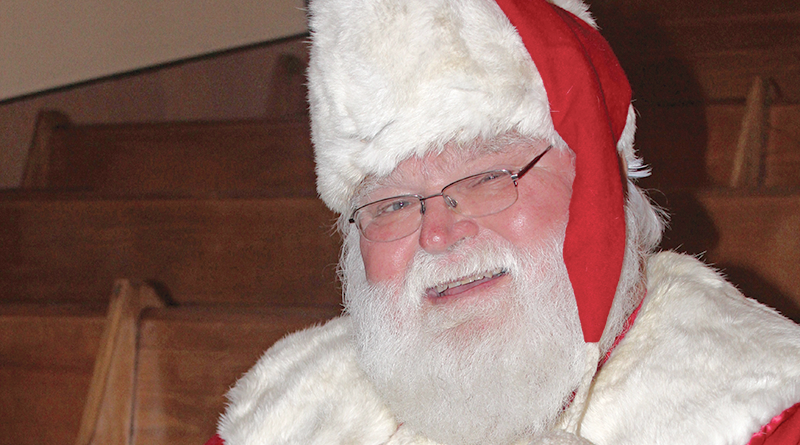 Does his belly shake like a bowl full of jelly when he laughs?

It’ll melt your icicles and warm your mulled cider.

Everywhere. All sizes. All ages. All colors. All the time.

In a radius from Waterloo to Lake Ontario almost to Syracuse, people assuredly know Santa Claus when they see him — and the man they recognize is Walt Krehling.

A retired 35-year Eastman Kodak employee with a radiant white beard he started to grow in the mid-1980s, Krehling, 71, is so well-known that if you stop and ask anyone in Fair Haven where Santa lives, they’ll tell you how to get to Walt’s house.

Call him and get his voicemail and you’ll find it has a simple message: “Santa.”

He drives a Santa-suit-red pickup truck with “No1Santa” on the license plate.

This isn’t an affectation. Walt Krehling knows who he is, and knows that he has a special gift to share with others. He loves the role, and he gets loved right back for fulfilling it.

He started stepping in for the big guy from the North Pole in 1991. Krehling had volunteered to read to children in the Red Creek Public Library on Saturday mornings.

“The teacher, Mrs. Becker, said to me, ‘Would you play Santa Claus for us?’” Krehling said, retelling the story of how all this got started.

Mrs. Becker pressed. “I have a reading class,” she told Krehling. “Would you like to attend it and read to the kids? It would be a great surprise.”

He thought about it.

“I worked at Eastman Kodak, in warehousing, and we had a recreation department. I borrowed a Santa suit from them and I played Santa Claus for Mrs. Becker. That went well. I enjoyed it. The kids enjoyed it.”

Krehling got talked into taking one more date as Santa, this time for a kindergarten class in West Genesee Elementary School. “I did it for that class, and the following year, for the rest of the school. It went very well. That’s how it started,” Krehling explained. The kindergarten teacher was Mary, whom he would marry several years later.

More requests came in, and soon he was on his own Santa Claus circuit.

He decided to get his own suit as the appearances started to add up. He contacted the woman who made the Eastman Kodak suit, but she had sold her business to the Santa Claus Suit Co. in Michigan. Krehling contacted them, and soon he was sporting a splendid red suit with white rabbit hair trimming that fit him perfectly. That was 1993. He still has the suit.

And his reach as Santa expanded shortly after that.

“I was at the Turning Stone casino, in the Christmas shop,” Krehling said. “I was just walking through and the lady stopped me, and she asked, ‘Do you play Santa Claus?’

“’Would you be interested in doing Santa Claus here in our shop?’

“I said yes. I did Santa Claus for Turning Stone at their Christmas shop, and it was a big success, all kinds of people and pictures.”

He played Santa in Turning Stone’s SavOn stores, did a Christmas Party in Manhattan for a law firm, Light the Park in Rochester, the Amerks games in December, the Century Club in Syracuse, Christmas in the Park in Fair Haven, fire company Christmas parties, Barbara Jean’s Furniture Store in North Rose, and the Waterloo Outlet Mall.

He has survived cancer, had his kidney removed, and married for the second time 17 years ago, to Mary, the kindergarten teacher, who accompanies him on 75 percent of his visits as Mrs. Claus.

A woman who spent years in malls setting up North Pole villages and hiring Santa Clauses, took one look at him in the Waterloo Outlet Mall seven years ago and said, “That’s the best Santa Claus I’ve ever seen.”

Why is this good man such a great Santa Claus?

Krehling, sitting on his porch and looking out over Little Sodus Bay, thought about that.

“First of all, I like kids,” he said. “What I get out of it, the children come up to me, and the looks they give me when they’re really close. I prefer to have the kids stand rather than get on my lap because of the way things are today. They touch my beard, ‘Is that really your real beard?’ And they touch it and pull on it. My stomach — ‘Is that real?’ They ask. Yes, that’s real.

“I like to hear what they have to say. I hear a lot very interesting stuff. A lot of kids in today’s environment, what they want is peace. They ask, ‘Can we have peace? Can we have a safe world?’

“Most of them are concerned about that, at young, young ages. They ask me for all kinds of stuff. I don’t promise them anything, just say, ‘We’ll see what we can do.’

If they ask for animals, I tell them I can’t bring them animals, that has to be cleared with Mommy and Daddy or Grampa and Grandma or whomever.

“I always tell them, policemen and firemen are our friends. They’re not going to hurt you. If I talk to a school, I bring that up. A lot of them are kids from single families, single Mom or Dad bringing them up, a lot of them say, ‘I wish Mommy was here or Daddy was here.’ I listen to them. They are concerned. I think they’re more concerned than when I first started.”

And he gets the jackpot question a lot. Spend five minutes around Krehling, and it’s obvious that this gentle man with sparkling eyes and welcoming smile is an embodiment of what we all think Santa Claus is.

So kids ask: are you the real Santa?

Not all kids want to see Santa. Mary Krehling says many kids will come up to her before her husband, to be reassured. But given a chance, this Santa Claus has a blessed charm.

“When I was a school bus driver for the Red Creek schools [a job he picked up after retiring and did for years], I was told there would be a new kindergartner on my route who was petrified by Santa. The grandparents were concerned. The little boy’s name was Matthew. The grandparents knew I was the bus driver. He was my first kindergartner kid I picked up. His grandfather told me, ‘You know, you being his bus driver, I don’t know if he’ll get on the bus.’

“So I said, OK. So I went to his stop and opened the door and said, ‘Hello, Matthew! How are you?’ 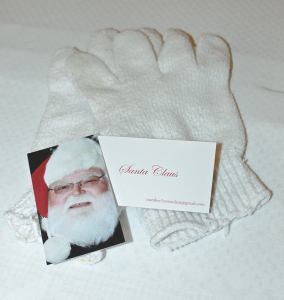 “His grandfather said, ‘I did not believe it.’”

Krehling’s favorite story took five years to unfold. In 2010, he was asked to visit the children’s ward at Rome Hospital. While he was there, a lullaby began playing on the loudspeakers — a baby had just been born.

“OK, we’re going to go up to the maternity ward. So we got up there, we’re walking down the aisle of the hospital, and the lullaby was playing and somebody hollered, ‘Santa, come here!’ I went into the room and a baby girl had been born — just born. As a matter of fact, the mother and father hadn’t seen her yet and the doctor gives the baby to me, all wrapped up, and the mother took a picture with me. The first time the mother had seen the child was with me holding her — just born.

“In 2015, I was doing a store for Turning Stone and this little girl came up and she had an instant photo in her hand. She asked, ‘Did you come to Rome Hospital and hold a little baby?’

“She said, ‘I’m the little girl,’ and she showed me the photo. It was precious.”

When Walt Krehling married Mary, she brought her two sons to the marriage and eventually, two grandchildren. One of them, Emily, 7, was asked to name the best thing about the Santa she knows and loves.

In 2008, my daughter Elisabeth took her son, Jaden, 2, to see Santa Claus at the Waterloo Outlet Mall. Elisabeth had been employed in Connecticut as the coordinator of a large mall’s North Pole Village: she hired Santa Clauses.

But when she saw Walt Krehling in his suit at Waterloo, she knew right away he was special. The way he talked to kids, his gentle mannerisms, and the smiles on the faces of the children brought her quickly to the conclusion that this was the best Santa she’d ever seen.

But she didn’t know that this Santa would become a special part of her life.

“The story I love is the connection between all of us,” Elisabeth wrote to me. “I had taken Jaden to see Santa at the Breakfast with Santa at the Waterloo Outlets since he was 2. I always thought what a great Santa he was. Then once Jeff Bentley and I started dating, I was showing him pictures of Jaden with Santa and that’s where Jeff told me that this Santa was his Uncle Walter.

“When we went to the family reunion at Walter’s house that he has every year, Jaden saw him in the flesh like a regular person. Then this past Christmas, he said that he knows Santa is real because it’s Uncle Walter, and that he thinks Santa brought Jeff and me together so we could all be a family.”

Jeff Bentley and Elisabeth were married in May. Uncle Walter and Mary were there.