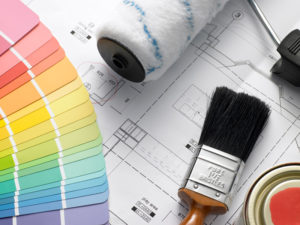 My wife and I have had five houses in three states, through our married life. We are now in what we hope is our very last home, in Newark.

Although we’ve been in this house for 13 years, I haven’t done one of the things I did in every other house we’ve had: I haven’t painted it.

This month I get started.

I was never smart enough to buy a ranch house. All our houses have had at least two stories. So, to paint our houses, I have had to get on a ladder.

Unfortunately, ladders are not my friend.

I have a tendency to fall off them. I’ve never gotten seriously hurt, but when I start to go up a ladder, adventure ensues.

When we lived in Altamont, outside Albany, we had a modest pale yellow Queen Anne Victorian house. I decided to paint it Yorktown Blue with beige trim.

I made it a family activity. My 3-year-old daughter Elisabeth painted most of the back stairway and attic entrance by herself, and she got almost as much paint on the walls as she did on the floor and herself. She wasn’t precise, but she was enthusiastic.

Somehow, my reputation with ladders got to some of the locals. We lived on a corner lot, with the two roads going by our house either leading to the fairgrounds at the end of the street or the elementary school in the other direction.

Which meant that whenever I did anything on either of those sides of the house, a lot of people noticed.

When I started the project, I decided to begin on the west side of our house, where I could reach a lot of surface from an 8-foot ladder, and use my big 24-foot ladder for the areas under the eaves.

And that went well. I only had one ladder crash when I didn’t move it carefully. Usually, when I’m painting a house, I have at least one instance where I have to jump off the ladder when it starts to respond to gravity.

“Heard you had to jump off the ladder,” said Jim, the mayor. He had stopped his drive up the street to the fairgrounds to talk to me.

“You mean am I nuts for painting my house myself?” I asked.

“No, that’s a worthy goal,” he admitted. “I meant, are you nuts for getting on a big ladder?”

I looked at him.

“People are wondering if you’re going to kill yourself coming off that ladder,” he said.

I started to protest that I’d be just fine, but Jim interrupted.

“No, John. People want to know when you’re going to paint the other side of the house — the high, steep side?”

“Because they want to watch. This is a quiet town. You might be all the excitement we have around here this summer.”

“I’ve got chairs and beverages in the car,” he said, motioning with his thumb over his shoulder at his car that was parked at the bottom of the driveway.

My faced was all screwed up. Finally I told him, “I won’t be painting the other side of the house for another day or two. I’m going to finish this side first.”

“Okay,” Jim said brightly. “Let me know when you’re ready to do the other side.”

“Sure will,” I said, giving Jim a big wink. He smiled and off he went.

It was awhile before I got to the other side of the house. I was using latex paint and I took a chance one afternoon and did a lot of work, quitting just as the first raindrops started to fall. Next day I looked at the side of my house and saw a Monet impressionist painting. I waited a couple more days for everything to really dry, then repainted.

That side was done.

“When will you be painting the other side of the house?” my wife asked when I went in for dinner.

“Sunday afternoon, in the shade,” I told her.

I was in the middle of washing my hands and doing some thinking, so I really didn’t process what my wife said right away…and then her last sentence did an instant replay in my cerebral cortex.

“The people who want to watch you paint.”

My wife went on to explain that she understood that people were going to set up a picnic across the road, on the grass in front of the school.

“All I’m doing is painting the house,” I told her.

My sweet wife smiled and said, “But we all know you’ll do something nutball tomorrow. Everyone is looking forward to it.”

I shook my head. This had to be a joke.

The next afternoon, I came out of the garage with a can of paint and a couple of brushes and, sure enough, Mayor Jim and his wife had set up chairs with a cooler between them.

I stopped in my tracks.

I brought the ladder around from the other side of the house and looked across the road. Sure enough, there were people there, but they were being polite enough not to stare at me, pretending to have a picnic.

I did what I always do when I paint, I pulled out my boombox and got some music playing, and up the ladder I went.

“You forgot the paint,” said Jim.

I had a brush in one hand but nothing in the other.

So I came down the ladder.

It was a long afternoon…