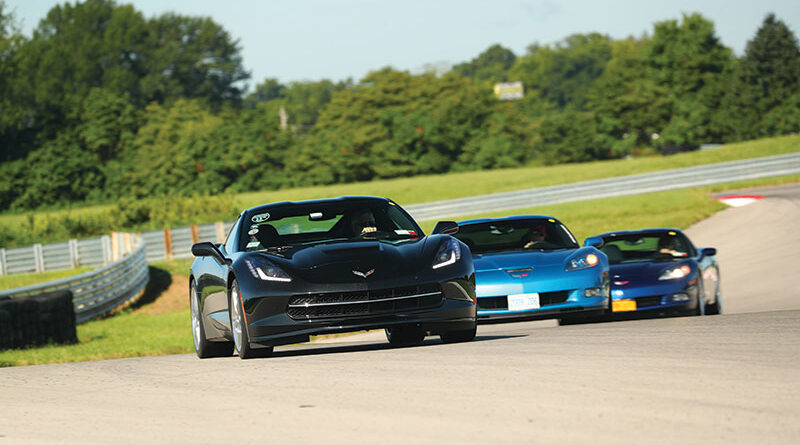 His wife, Cheryl, wanted to note that accomplishment.

“You have a big birthday coming up,” she said to him three years ago. “You’re going to be 80. You deserve something really special.”

In many ways, Bob’s request – and that fact that he’s now owned his 2006 Corvette for three years — is not unusual.

Not according to the Rochester Corvette Club.

Founded in 1959 by Gene LaDoux and the late Al Frederick, the 700-member Rochester Corvette Club is an extremely social group, a technically savvy organization and a motoring coterie ready to unleash all those ponies under the hood for a trip to the Blue Ridge Mountains, a state park, Mount Washington in Maine, a veterans’ remembrance, a picnic, an expedition to the Corvette Museum in Tennessee, a town parade or an ice cream shop a couple of towns over.

Members want to drive their cars, talk to other Corvette owners and have a good time. Many in the RCC are retired and able to enjoy their cars even more.

“They’re at a point in their lives when they can afford one,” said Dave Kuchman, the club historian.

“Remember what it was like when you were in your 30s, raising a family?” said Fred Elliott, the club’s president.

“When you were younger, you had kids, an education you were paying for, a mortgage, and all kinds of family expenses,” Kuchman added. That was then. “Now these people are in their 50s or older, their kids are grown up, the mortgages are paid off and they can afford that Corvette.”

“I’d always wanted a Corvette,” Elliott said, standing next to his red 2015 Stingray, “ever since I was in high school. I’d never had the opportunity or the funds to get one. One day, after one of my friends had passed away, another friend and I got to talking. ‘What are we doing?’ We asked each other. Our friend died in his recliner in his living room. That’s not the way I want to go out. We both decided, we gotta do something different. I was driving by Turner’s Auto on Route 96 one day. I always stopped and looked at the Corvettes. This time I stopped and bought one. My buddy bought a Harley. We both said, ‘You can’t keep putting off the inevitable: If you want to, just do it.’”

Elliott’s Corvette, a 1985 model, was the first of three he’s owned.

Corvettes have been around since 1953. They have always been two-seaters, which limits the appeal for some people, increasing it for others. At first, engines were anemic; that changed. They are now mighty. The styling is singular. The sound is earworthy. And, other guys and gals driving Corvettes wave at you on the road.

“I love to drive my `Vette,” Elliott said. “It makes me happy. The time we grew up in the 1950s and 1960s, Corvette, to me and a lot of guys our age, it was the epitome, something to aspire to car-wise. The coolest guys always had Corvettes. Not being cool, I wanted to have a Corvette. I’ve always felt that for what you spend on a Corvette you’re getting a hell of a lot of car, especially compared to some of the foreign cars that are in that same class but cost twice as much and I don’t see where you’re getting that much more for your money, other than snob appeal.”

Buy your Corvette, join the Rochester club, and the first thing you learn is that a Corvette is not just a guy’s car.

Roseann Lucania, from Penfield, who notes her age is “plus 55,” drives a bright Sebring Orange 2020 Corvette—the latest model, with an engine in the middle of the car, not the front. It’s a car that has appreciated in value since she drove it off the lot, and it is her fourth Corvette.

“My husband started us with a 2001 Corvette,” she said. “It was his baby. After he passed, I drove it out of the garage, looked up at the sky and said, ‘Hey, honey! Look who’s driving your car!’ I hope he got a kick out of that.”

“I love that car,” she added. “I drive it everywhere.”

Lucania’s advice to any other women who are looking to add a singular automotive spice to her life: get yourself a `Vette. “If that’s what you want to do, go ahead and do it. Life is short. Go and enjoy it. That’s what I would tell anyone,” she said.  “People will pull up next to me and see this is a lady driving this Corvette. It makes me feel young. I feel like a kid when I’m driving. That’s what’s important – to feel good doing something you like.”

Jim and Elizabeth Hill of Rochester have a white 2013 Corvette. “These cars are unique,” he said. “They’re American; they’re born here and made here. You don’t see a lot of them on the road.”

Many Corvette owners take extreme care of their babies, some of which haven’t experienced raindrops in years. And snow—what’s that? One of the first surprises someone shopping for a Corvette will experience is that the mileage is so low on most used cars. In this area, they’re only driven in nice weather. With decent care, an old Corvette can look awfully new.

Jim and Elizabeth put miles on their `Vette. “I decided I saw too many of my friends pass away that saved their cars, didn’t drive them, then they die,” Jim said. “I’m going to use mine. This year I’m going to use it a lot more. I got it; I might as well use it. It’s just a nice car, a fun car. It looks nice.”

As a former club president, Hill has found the value of this club. “It’s the greatest bunch of people I’ve been involved with, right here. We have no agendas: There’s no political agenda, no race agenda, no religion agenda. One of the things I’ve always liked about this club is that if you had 60 of us here and you made 30 go somewhere else, they’d all sit down and start talking and having a good time,” he said.

“We have a great bunch of people—a mix—everything from lawyers all the way up to truck drivers. East side, west side, new cars, old cars. I was worried when I came to my first meeting with a ’99 Corvette and I stood up to introduce myself and tell people what I drove. I thought people would laugh and say, ‘We had that car four years ago.’ It wasn’t like that at all. It is a very welcoming group,” he added.

“You can participate in as many activities with the group as you want,” said Joyce Juzwiak.

She and her husband, Joe, from Rochester, have a 2008 silver `Vette.

“This is a social club where you’re meeting other people—singles, families, women only—people you can have fun with. It’s an opportunity to meet other groups,” she said.

People join for the social stuff, for the road trips, for the rallies and cruises, for trips to restaurants and wineries and picnics, for learning about care and maintenance, for trips to races or driving on racetracks, and for long seasonal rides.

“It’s a good club,” said Elliott, “with good people. Our social events are great. The people who organize our activities are very enthusiastic. We’ve gotten together to do Christmas caroling, euchre parties…we’re always looking for new ideas and people to step forward and say, ‘I’ve got a great idea.’”

One of the draws of the Rochester Corvette Club is the association with VanBortel Corvette in Macedon, a superstore for `Vettes. Owner Kitty VanBortel supports club membership by offering a free state inspection for your Corvette, a free oil change, 15% discounts on parts and labor, and special dedicated technicians to work on your car.

When you’re ready to buy your next used `Vette, VanBortel will take $500 off the sticker and will sell you a new one at the MSRP sticker price (2021s are selling for huge mark-ups nationwide, if you can find one).

The benefits Kitty VanBortel showers on members are one thing, but the service she provides is the stuff of local legend.

Joe Juzwiak tells the story about the club’s trip to Mount Washington, where another member’s windshield-wiping system died. “It rained every day,” Cheryl Russell added.

“The nearest Chevy dealer didn’t have any openings. Those poor people couldn’t go anywhere with the weather the way it was. They were stranded. They didn’t have a car they could drive,” Juzwiak related.

Desperate, the club called VanBortels from Maine. Shortly thereafter, “Kitty dispatched one of her mechanics who drove 10 hours in a loaner with the parts to fix the car. I was astounded. What kind of dealer sends a mechanic and a loaner for a 10-hour drive?” Juzwiak said.

Kuchman and Elliott also pointed out that the club likes to give back to the community, sponsoring at least one charity each year and often responsive to requests for Corvettes at charity and civic events.

Bob and Cheryl Russell let their grandson drive their Corvette to the senior prom (but he used another car after the prom).

Elliott said there’s a little boy on his street: “He’s got to be 4 or 5. Every time my car goes by, he waves. I gotta stop one of these days and talk to his dad and say, ‘Hey, if it’s all right with you, I’ll take him for a ride around the neighborhood…he’s a future Corvette owner.”

Photo: Members of the Rochester Corvette Club practice cleaning out their fuel injectors on the track in Bowling Green, K.Y. in August of 2019 at the end of a caravan from Rochester to the 25th Anniversary of the Corvette Museum. Photo CreditDave Norton