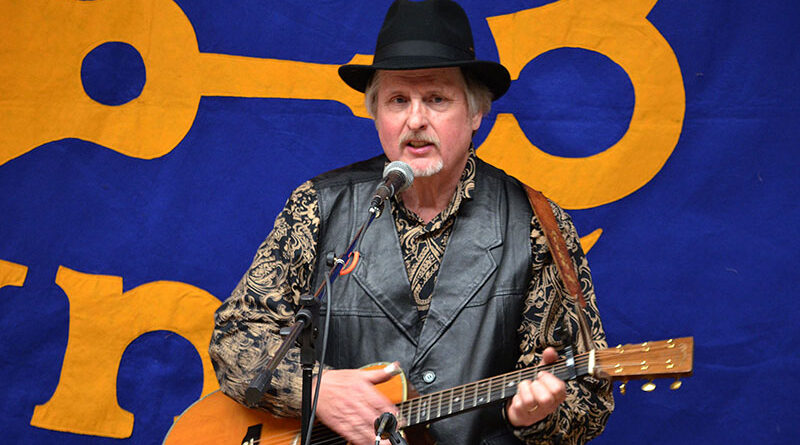 …but is concerned with the way police are portrayed in songs

Veteran local musician Allen Hopkins, 77, loves the folk music he’s heard and played over the course of some 60 years that includes his Harvard University undergraduate days.

Cambridge wasn’t simply a good venue for higher education; it was a folk music hotbed in the mid-1960s where the likes of Joan Baez, Tom Rush and Taj Mahal got their start on the way to fame.

While at Harvard in the mid-1960s, Hopkins got himself a five-string banjo and learned to play it from Pete Seeger instruction books. The versatile local musician now plays somewhere around a dozen or so different instruments without having had a single lesson.

Today, the former Rochester Police Department employee and self-proclaimed liberal Democrat is retired and enjoying his local music roles as a solo performer, group member, session man and concert host and organizer. He has performed with numerous musicians over the years and often teams up with local singer songwriter Bonnie Abrams today.

What do a police department and left-leaning political views have to do with each other? “That’s not the general orientation of the police department, he said. “They tend to be a little more conservative and not pleased with protesters,” which he was as a devoted disciple of his idol, Woody Guthrie, and other protest-song singers like Baez and Bob Dylan.

Hopkins was a Vietnam War protester back in the day marching to Buffalo Springfield and Crosby, Stills, Nash and Young protest songs. Protests and peace marches have long been a venue for the folk musician.

“It was like having a foot in both camps,” he said about his protest involvement and day job at the police department where he was an administrator in charge of the budget office, but not involved in law enforcement directly or in keeping the peace on the streets. In other words he wasn’t the one protest singers were targeting. But, he still feels sympathy for the officers on the street and on the front lines.

“The police play an important function. They are not the villains they’re often portrayed to be. I never felt my folk music principles were being compromised by what I did there at the police department,” he said.

Hopkins enjoys delving into the history of folk music throughout American history. He’s been playing it at the Genesee Country Village and Museum since 1976. He’s also researched the lyrics of songs critical of the police and police actions and has found some that aren’t entirely accurate. Still, the songs live on. The artist doesn’t go back and change the lyrics.

In the folk music genre, there aren’t a lot of famous folk or rock songs praising the police, no matter how good a job they do.

“We’ve got to have a lower level of anger and confrontation,” Hopkins said.

Dealing with the mentally ill on the streets is an area Hopkins thinks police can improve upon. “A good police department is in the community and part of the community, not an outside force, he said. “They’re not all confrontational or threatening. They keep people safe.”

“Folk music and police work seem like total opposites but I don’t think that’s true,” he added. “There’s no society without public safety. Woody Guthrie’s perspective was that they were not his friends and that feeling has persisted today with Black Lives Matter. It’s an almost inevitable conflict between people whose perspective is they’re the underdog, they’re dispossessed, not treated well by police enforcement.”

Among other forms of music, Hopkins noted that rap is particularly full of anti-police sentiment.

“Their picture of our society is a hard one,” he said of a mostly young black male audience that is continually oppressed, often incarcerated and at times confrontational.

Hopkins said country music is the one form of music that has lyrics supportive and appreciative of police.

Hopkins may not be able to change the misperception of the police as villains in popular music, but at least he knows where it comes from since the issues of the day have always shown up in musical lyrics throughout our history.

Historical folk music is what he likes, a fact that makes him a good fit for a historical museum like Genesee Country Village and Museum, the Livingston County bicentennial celebration, historical theme shows, Civil War reenactments and senior homes, where he plays regularly. He plays music from Stephen Foster on up to the 1930s, 1940s and 1950s for appreciative senior home audiences.

“My focus is to get the audience to participate. They may be clichéd songs but people respond to them. It has a therapeutic effect as well as an entertaining effect that I really enjoy,” he said.

The pandemic with its risk of infection and subsequent cancellation of activities and concerts slashed Hopkins’ performance schedule.

Folk singers have a lot to write and sing about these days, but few opportunities to perform them until now.

Many, if not most clubs, are still not back to hosting live acoustic sessions. Some venues such as the Greenhouse Café on East Main Street in Rochester didn’t survive. Fortunately, the tradition of folk music players sharing their music with each other did survive.

“It’s important to be a performer playing for audiences. But, to me the core of folk music is singing and playing together with others who love it,” he said.

Hopkins helped found the Golden Link Folk Singing Society, which celebrated its 50th anniversary with a May 22 virtual concert that can be seen on YouTube. A calendar of upcoming folk music concerts at various venues in upstate New York can be found at www.goldenlink.org.

Audiences are eager to return to live performances and musicians are even more eager to get back to work, Hopkins said.

“Hope it isn’t too long before singers and listeners will be getting together to join voices and instruments, as we’ve been doing for longer than anyone can remember,” Hopkins said with optimism.