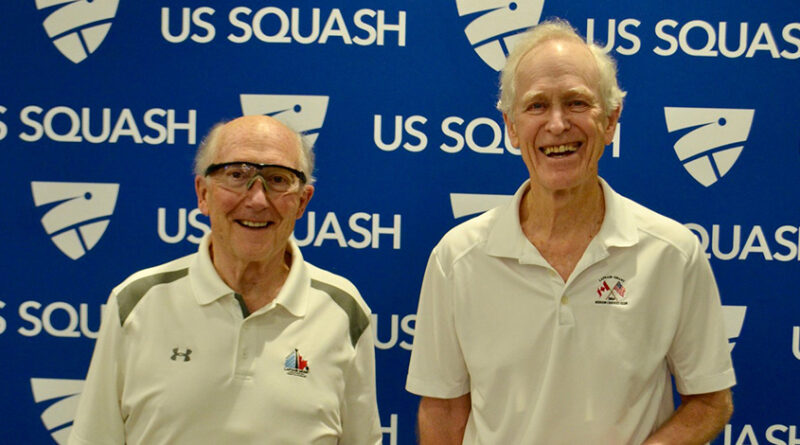 Squash is not a game for the faint of heart. It takes a strong heart and keen mind to excel.

Dick Rice, a 78-year-old Rochesterian and his playing partner, Jim Zug from Philadelphia, have won the 2022 U.S. National Doubles for the 75+ age category in Philadelphia in March.

A three-sport athlete at the University of Rochester, Rice played football, baseball and ran track for the school while earning a BS in mechanical and aerospace science. He was selected as the winner of the Louis Alexander Alumni Award presented to the UofR senior male athlete who had contributed most to student life and athletics. Rice was inducted into the UofR Athletic Hall of Fame in 2003.

“What I love about the doubles squash game is the intense competition while on the court, enhanced by the amazing camaraderie after the match. With hundreds of resulting close squash friends across North America, I would, and have, invited any of them to be a guest in our home,” he said. “That, to me, is the highest compliment I could pay.”

Addicted to sports, Rice played slow-pitch and semi-pro baseball into his 30s while putting to use his engineering degree as operations manager of the 1.2 million square feet serviced by Midtown Holdings. His next career move was to consulting engineering as he opened the Rochester office of WKBW Engineers as its manager. His career continued with stints at M/E Engineering and Erdman Anthony Engineers.

After his introduction to the game of squash by the president of Midtown, Rice was asked to become a doubles partner with local CFA Alan Ziegler and he began entering national and international competitions. With numerous partners (60+), Rice and partners have won tournaments from Vancouver to Montreal and San Francisco to Philadelphia. He has represented the U.S. in team competition against Canada for 23 years.

Rice has contributed to the community as president of the Rochester Engineering Society, president of the IES, board chairman of the Hochstein Music School, adviser to the Sisters of St. Joseph, and chairman of the Southeast Loop Citizens Advisory Committee. He currently serves on the UofR Engineering Dean’s Advisory Committee, Friends of UofR Athletics, and the Psi Upsilon fraternity board.

Rice is also currently putting his engineering and planning expertise to use for his alma mater as they take on one of the most ambitious projects in their history, the UofR Medicine Orthopaedics and Physical Performance Center.

“I have had 24 orthopedic surgeries and know the importance of a skilled surgeon, great nursing care, and rehabilitation therapy. I could not have played squash competitively without these surgeries; my own drive to return to the game would have been impossible,” Rice explained. “My role on this project is to provide input from my numerous surgical experiences, since I have become fairly expert as an orthopedic patient.”

Having goals and sometimes physical challenges to overcome and a group of friends who have similar interests, are all motivators in making the next day count,” he said.