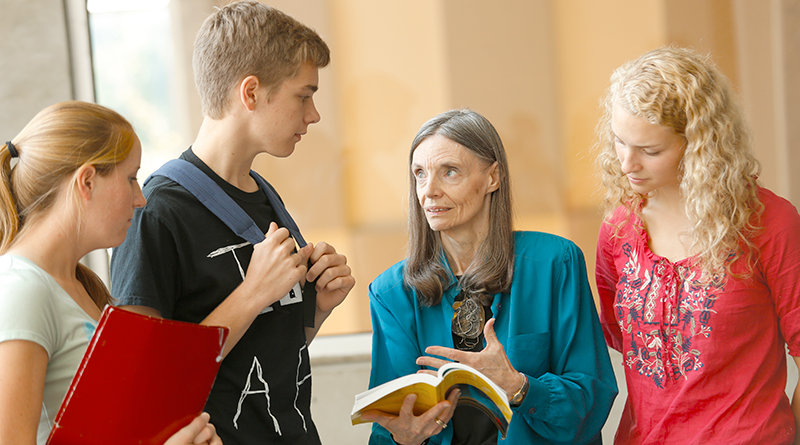 Roberts Wesleyan College in Rochester has just passed its 150th anniversary, and Elvera Berry has been teaching for more than a third of its history.

In her 53rd year in the classrooms, she has founded many programs that still exist today.

Since the 1970s, Berry has been deeply involved in program development at Roberts, working with colleagues to establish freshman and senior seminar programs, leading the honors program for many years, and developing the communication major, which now boasts over 250 graduates.

“Students remain endlessly fascinating, complicated, delightful, and at times frustrating,” said Berry, 75, of Chili. “People have asked over the years, ‘How can you stand to continue doing my kind of work, especially with today’s social media generations of students?’ I don’t tend to think about what divides the generations. I simply enjoy working with students and inviting them to join me on an educational “‘voyage of discovery.’”

A native of Brooklyn and born to German immigrants who owned a dry-cleaning business, Berry’s father impressed the importance of education on her and her brothers from the beginning. The fact that he and his wife didn’t have the opportunity for such an education made it more than an opportunity — it was an obligation. So, while Berry had the dreams and talent to be an actress or musician, it was clear her path would be one of academics.

When she graduated from Narrowsburg Central High School in Sullivan County, she knew she would be going to college.

“My immigrant parents had made that clear, but options for my generation included teaching or nursing, which I was not interested in,” said Berry. “I might have entered law or theater, but those were not options. The question was ‘teaching what?’”

She narrowed it down to two of her interests — music or Spanish. Eventually, she majored in German and minored in Spanish, music, and education — beginning as a German teacher in the Greece Central School District.

Then, she began teaching German at Roberts in 1964, but has spent most of her time teaching in the field of communication and rhetorical studies, as well as in liberal arts, the college’s honors program, and degree-completion programs.

She has since followed up her education with a master’s degree in linguistics and German from the University of Rochester, a master’s in rhetoric from the SUNY Brockport and a Ph.D in higher education from SUNY Buffalo.

Berry developed a unique reputation in her time as a tough educator. Certainly influenced by her father, she expects students to treat education as an obligation more so than an opportunity. Particularly when she first got started as a young professor, she wouldn’t laugh in class. No laughing until October, or else she’d lose them.

“I tell my students that teaching is a naked profession. It’s impossible to hide, especially if you seek to build a community of learners in a classroom,” said Berry. “All bets are off if your goal is to ask and encourage honest questions because genuine questions do not typically yield simple answers. Real questions are often unanticipated and, like life, they get messy.”

An underlying source of guidance which Berry has embraced is the school’s founder, B.T. Roberts. The more she learned about the man, the more inspired and proud she became to further his legacy. The college was founded in 1866 by Benjamin Titus Roberts — a contemporary of Frederick Douglass and Susan B. Anthony, who all shared the vision about the importance of higher education.

“Students remain endlessly fascinating, complicated, delightful, and at times frustrating.”
Elvera Berry, who has taught at Wesleyan College for more than 50 years.

He gave up his intent to practice law and became a minister and writer. The college was founded to educate women and men and has remained a place for traditional and non-traditional innovative programs of higher education — including the first Rochester-area degree-completion programs.

“I prefer to think in terms of our common humanity and what will best serve us as individuals who are also called to be citizens of a much larger community and the world,” said Berry.

She has experienced her entire life’s work in Rochester: college-level teaching, participation in institutional work and program development. Berry thrives on Rochester’s rich history of innovation and hope for people living on the margins, and on the variety in churches, education, ethnicity and arts.

A continuous learner, she often takes in life lessons.

“Wherever you are, learn from those around you — even if it sometimes means learning what not to do,” said Berry. “Care for others; see them as partners in life’s very short journey; listen with the goal of understanding rather than to winning the ensuing argument; be able to laugh at yourself and to offer grace and forgiveness.”

When you have taught so long, something inside must continue to fuel your passion. She typically finds that out on day one.

“I always said if I walk into a classroom and just feel like I am going through the motions, then I would retire. But so far I haven’t felt that way,” added Berry. “Most fulfilling have been the literally countless students whose lives I hope have been affected positively by someone who tried to help them discover the joy of learning and breadth of possibilities for them. Some have become personal friends, from as far back as the 1960s and well into the 21st century. Hundreds have gone to grad school, have been playing their part in making this world a better place, and have their own stories I would love to hear.”

While teaching will always be one of her first loves, she also enjoys the Rochester music scene with her husband, Paul, who also teaches at Roberts.

In the past, they were heavily involved in local music and church groups such as Opera Under the Stars, The Rochester Chorale, and The Bach Festival Chorus. She also delights in seeing her son, daughter-in-law and her two grandsons, aged 5 and 9.
She is so dedicated, her collegues wonder where she even finds free time.

“Her commitment to generations of students includes life-long mentoring and the invitation to full participation in professional academic conferences,” said Porterfield. “We are indebted to her for her lifetime commitment to the mission of the institution and her personal investment in the lives of our students.”

As Berry reflects back on her five decades of educating young minds, she can’t help but think about her parents and influential others. She knows her success will always be tied to her upbringing and understands that each of her environments played a key role in her life.

“I would credit very bright but uneducated immigrant parents who pushed me, knowing I’d have to somehow figure it out on my own,” said Berry. “And I would add a couple of teachers who cared about a hesitant and sometimes frightened kid, and an intellectual mentor. He invited me to join scholarly conversations, yet I never really knew the difference his ideas made in how I think and question and try to teach.”

She also credits her husband and son “who granted me the right to be wife, mother, professor, and would-be ‘mentor’ to a much larger family of students,” she noted.