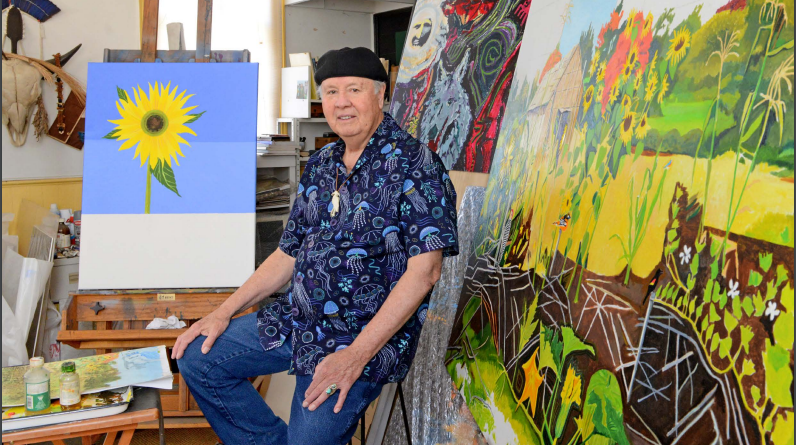 Steeped in history, fueled by creativity and driven by a passion for tackling the impossible, G. Peter Jemison (Seneca, Heron Clan) has been the face of Ganondagan State Historic Site for more than 35 years.

Known  regionally and internationally for his artistry and visionary leadership, Jemison’s body of work and historical expertise have had far-reaching impact.

But ask Jemison which career accomplishment tops his personal list and he’ll likely point to the 2015 grand opening of Ganondagan’s multimillion-dollar arts and culture facility.

After some 13 years of planning, the $12 million, 17,300-square-foot Seneca Arts and Culture Center became a reality. It now sits adjacent to the Seneca Bark Longhouse on Ganondagan’s 569-acre hilltop, the original site of a 17th century Seneca town.

It was Jemison’s vision and commitment to ensure Ganondagan’s future that first brought SACC to life.

“Our master plan called for a new building and a key thing for me was to see that built,” he said. “I felt as though the building would give Ganondagan even more of a permanence.”

Without a structure on the site of the historic village, he said, it might have been tempting to sell off a portion of the vacant land at some point to stave off a temporary budget crisis.

But there were many disbelievers, especially at the state level.

“They thought I’d never be able to get this done,’” he said. “They didn’t believe I could raise the money and they told me so.”

Although there was no original plan for how it would all come together, the parts started to fall into place, Jemison said.

“And when that happens, I’m good at seeing it,” he said. “I found people who understood what I was doing, who I wasn’t having to try and convince — because I can’t waste my time doing that. I worked with those people who had a like mind, and I gave them a role. ‘This is what you could do,’ I said. And they became supportive.”

He remembers the day of groundbreaking vividly as cold winds and pouring rain threatened to dampen the ceremony.

“We were all huddled under a 40 by 40 tent,” said Jemison. “All of those supporters were there, getting cold and wet and dealing with the conditions. When we got ready to put the shovel in the ground, it stopped raining. I just felt so supported at that moment by the people who were there that I believed it would come about.”

There were setbacks and some board members were ready to give up.

Supporters came up with solutions for the problems and the project moved forward.

“It took a few months longer than I thought, but I’d been at it for years already so that didn’t seem too bad,” said Jemison. “I had to have faith, and it all worked out. That experience still resonates with me.”

More than brick and mortar

Right out of the gate, Jemison knew it would be the programming that would elevate Seneca Arts and Culture Center beyond a typical historical museum to a place where past, present and future lived together.

“We had to consistently do some things that were unique,” said Jemison, recalling the moment his vision first materialized.

“This is exactly what I meant,” he said as he watched a guest presenter in action. “This is what I hoped it would achieve.

“Understanding those things and seeing that women have a primary role in our way of life helps to explain who we are as the original people of this country,” Jemison added.

The museum has proven to be so much more than “a collection of things.”

“We’ve achieved the goal of this building, which is to have it be alive and ongoing,” he said. “So even as we tell the story of what came before, we have to have a living presence.”

Oral tradition is passed on to younger folks so they’ll not only understand it, but be able to teach it to the next generation, Jemison explained.

“Then there’s a written record recorded by people who visited,” he said. “But that wasn’t always accurate because they didn’t have the gift of our language and came from such a different experience that they weren’t always correct in what they thought they saw. These are the people who created maps and captured the things nobody else was around to write about.”

Archeology yields tangible proof of what was traded, created and valued — these artifacts have their own specific stories to tell, Jemison said.

“I knew who I thought could carry on the work I was doing,” said Peter Jemison. “I knew my youngest son could be important to help. So he had to go through an interview process and luckily he came out on top. He’s doing a good job and has his own ideas of what should be done.

“Michael Galban had been with me for 30 years. He knew what he wanted to do and how to keep things going. So we divided my job into two people and it’s working so far.”

The site is a National Historic Landmark and is listed on the National Register of Historic Places.

“The purpose of art is to help people see,” said Jemison.

And that’s exactly what he’s done for decades.

Widely shown and collected, Jemison’s works are rooted in the framework of Native American art. His art embodies orenda, the traditional Haudenosaunee (Iroquois) belief that every living thing and every part of creation contains a spiritual force. His paintings, videos, and mixed media works explore a variety of topics, including political and social commentary and his relationship with the natural world.

“If you’re an artist, your art can only be appreciated if it’s seen,” said Jemison. “And for a long time my work was really not seen. Those who control the museum, publicity and art world didn’t see why Native American work
was important. So my art was really unknown. But I kept working.”

For decades, Jemison has been driven by the certainty that an artist cannot talk about what they would do — they can only show what they have done.

“If you have the opportunity to exhibit, you can’t be standing there talking about what you would have done or what you wanted to do,” he said. “You have to have there someplace what you did do. And it has to keep evolving. You have to keep working.

“Art is the long road. “It takes a long time. And even in my lifetime, maybe a judgment is made (about my work). And whether that judgment is confirmed will only be known long after I’m gone. They’ll decide whether what I was doing was really important or not.”

In this stage of life, Jemison’s work and accomplishments are gaining prominence and he’s busier and more in demand than ever before.

It’s gratifying, to be sure, but each request requires multiple steps and takes more people to help deliver what’s requested.

“So I do the best I can to keep up with this stuff and I’m very lucky right now,” said Jemison. “Fortunately for me, in the beginning I found a very good partner and she has stayed by my side and has helped me hold it together. She is the one who really knows what the real deal is — and she still likes me — and that’s really remarkable.”

Throughout his life and career, Jemison said it’s never been a question of whether he could get something done or not. And he never thought if he sat around thinking about something, it would magically happen.

He continues to take action, create inspiring, insightful art and enjoy each step of “the long road.”

“When you’re the beneficiary of a lot of good things,” said Jemison, “you really need to count your blessings and attempt to live in the moment — to understand and feel what you’re doing and to feel good about it. ”