Break out the shovels: Countering winter’s wily ways is challenge in and of itself 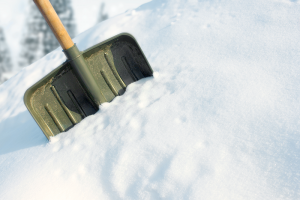 They’re waiting in the garage.

Hung up since last April, they have been patient. There’s a blue one, a couple of red ones, a black one and an orange one. When I go into the garage, they rustle, like dry leaves on a tree, anticipating. They sense my coming and going. They watch. They know.

Now, at this time of year, they delight. They anticipate that I am going to embrace them, spend time with them and need them.

I haven’t named any of them yet, but we are close, the snow shovels and I.

My snow shovels and I have two favorite times to enjoy together — early morning and late at night. I kind of hate the morning sessions because they mean: A. That I am out of bed and outside at an earlier hour than I’d prefer; and B. It means when I get to the end of my driveway I can see all the other people who have to go to work driving by, all of them smugly thinking, “My driveway is clear, HA HA!”

In my life, I didn’t do a lot of snow shoveling until I got married and we were in our first house. When I was young, my asthma was so bad that I couldn’t do much shoveling without bringing on a full-fledged attack. It was something by father gritted his teeth and bore while he did all the shoveling.

I didn’t do any shoveling in college, and none when we lived in apartments. In our first house, in southeastern Pennsylvania, we didn’t have to do much shoveling until we got a 40-inch snowfall that blocked our street completely for days.

I have photos of my wife and our first-born standing in the shadow of a six-foot wall of snow along our driveway. We moved all of that with shovels a lot of years ago.

We then moved to Upstate New York — near Albany — our first week there we had 30-some inches of snow and it took us a day to clear a very short driveway. We lived in an apartment for a little bit of time, then we took possession of our new home, where, when I went outside to shovel in the dead of winter, in 10-degree temperatures, I did it with just a light sweater on.

I was told we had “dry cold” in the shadow of the Helderberg Mountains, so I didn’t have to get bundled up. I had the same response to everyone who told me that: “You’re nuts.”

Now that we’re in Finger Lakes-Lake Ontario area, living in the village of Newark, I have found two things to really dislike: lake effect and snow plows.

When we moved here, I was told to get a snow blower. I pictured that thing not starting on the very morning I needed it most, so I bought an electric snow thrower, which is light and quite efficient. Problem is, it will only handle about seven inches of snow.

But the snow it does gobble up, it really throws — more than 20 feet if it’s the light stuff.

But when we have lake-effect snow, with a lot of wind, I have to use that snow thrower pretty often because the snow piles up quickly, and the wind moves it around. So, I might be out a couple of times at night in the height of a storm.

There’s a line from an old Jim Croce song, “Bad, Bad Leroy Brown,” where you’re warned about spitting into the wind.

Croce could have written another verse about not snow-throwing into a lake-effect wind. The first time I got out on my driveway and tried to battle the storm, I lost. I also lost the feeling in my hands, feet and face, and I couldn’t see.

The snow was blowing out of the snow thrower, yes, then blowing right back into my face. Because of the swirls and eddies of the wind coming around the corner of our house, I couldn’t escape it.

When I took a break and went back into the house, my wife jumped in her seat when she saw me. What she remembered going out the door to deal with the snow isn’t what walked back in 45 minutes later. I was white from head to toe, my beard was frozen and I had ice on my eyes and in my ears.

I started to say something, but my face cracked the ice shield I’d acquired. “I think I’ll take a break,” I said.

“Good idea,” she told me. “Don’t come into the kitchen until you get some of that snow off you.”

As I got more experience, I learned to pick my spots with the snow thrower and lake-effect snowstorms. I can now normally do the whole driveway and not come back into the house looking like a yeti.

Then there are the snowplows.

We have great guys in Newark and they do a wonderful job of clearing the roads. But one guy seems to have it in for me. He goes down our street on the far side, then turns around and comes back. And when he does this, he picks up speed along the whole way so that by the time he gets to my driveway, he’s really cooking. He then hits the brakes right after my driveway.

Because he’s built up some momentum, the plow doesn’t deposit the street snow on the first couple of feet in my driveway; I’ve got pieces thrown 10 feet back, covering the sidewalk, too.

That plowed snow is heavy and has all kinds of little surprises in it that my snow thrower can’t handle. So the shovels come out, and I can spend a lot of time clearing a path through the last four feet of my driveway.

I mumble to this snowplow driver at moments like that, out in the darkness, when I’m wondering if this is the shovelful that puts me in the hospital. I wish him and his family well.

I wish that when he comes down my street in the next snowstorm, his wife will call just at that moment and tell him to bring home some eggs and milk from Wegmans, so he’ll have to slow down to write that down as he passes my house. And I’ll mumble one more thing to him in my thoughts: