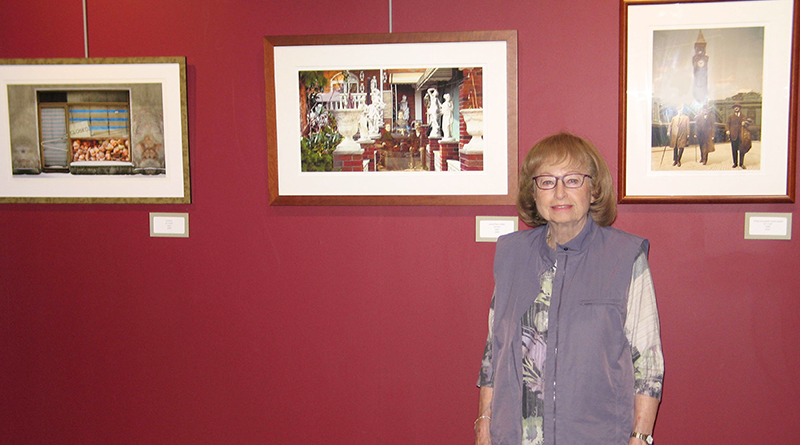 Roslyn Rose, 87, brings her passion for art to Rochester

When Roslyn Rose was in second grade, she drew a picture of a bird, and her teacher told her she would grow up to be an artist.

“I didn’t even know what an artist was. I had to go home and ask my sister,” she says with a laugh. “I’ve been an artist ever since.”

Now after more than eight decades pursuing her passion to create, the New Jersey native is making her mark on the Rochester art world. The 87-year-old artist moved to the city with her husband, Frank, in 2015 to be nearer her family.

Rose set up her studio in the Anderson Alley Artist Studios and is an active participant in the community of Rochester artists, taking part in First Friday Art Walks and exhibiting at local galleries.

She made her area debut at a group show in the Image Gallery photo exhibit in October. Her first solo exhibit in the area was at the MuCCC Theater Gallery during the month of May, and she is a participant in the RoCo 6X6 exhibit, which is on display until July 16 at the Rochester Contemporary Art Center at 137 East Ave. in the city.

Evolution of an artist

Take the freight elevator up to her fourth floor studio in the Anderson Alley building, and you can see the development of her myriad interests on display. Etchings hang side by side with her photo montages, interspersed with wooden box assemblages created from found objects: tiny dolls, wooden spools, bits of jewelry and fabric trim.

Light floods the studio from huge windows that once illuminated workstations in the former shoe factory. Traversing the weathered wooden floors and touching the brick walls, you can almost hear the hum of the machines and smell the leather of the long-closed factory. It’s an inspirational place for making — and viewing — art.

Rose has evolved as an artist over the decades. Classically trained as a painter using Renaissance techniques, she worked in oils at first, specializing in portraits of children. As word spread about her talents, so did her client base, as families commissioned portraits.

During this period, she met a man who did wood engravings for stock certificates. She became fascinated by the medium and returned to school to study etching and lithography at the Pratt Institute in Brooklyn.

After experimenting with techniques, some of which saw the diminutive Rose pushing heavy lithograph stones across the floor to make her prints, she purchased an etching press in 1971 and rented time on it to other artists to help pay for the significant investment. Her etchings became popular and, through the New York Graphic Society, she was selling prints on a constant basis to private collectors and corporate entities. She would continue to produce prints on that press until she and husband Frank sold their suburban house and moved into a Hoboken condo in the early 2000s.

That’s when Rose made the transition to photo montages. She would tear up her old prints, combining photos with bits of her etchings, experimenting with techniques as she went.

A young artist introduced her to using the computer program Photoshop and she began to see the possibilities for manipulating and combining images using computer technology.

“I juxtapose the neglected with the occupied, the deserted with the inhabited, one place with another, or the past with the present,” she writes in her artist’s statement, “I combine reality with unreality to go beyond the traditional photograph.”

Her husband’s career in academia allowed the couple to travel to Europe and Asia in summers, and Rose has always collected images, especially historic and abandoned buildings. In her current series, “A Different View,” she opens up portals — stripping out the windows and doors — and fills those spaces with images from another time and place.

“My camera and computer are mediums that I use to explain the photographs, producing montages that speak to the spectator. Viewers are invited to blend their own imagination with the illusions I present,” the artist explains.

A converted warehouse in Tacoma, Wash., becomes a window on the Maine coastline. Look closer, and you see its rooms populated by penguins, which Rose painstakingly silhouetted, separating each bird from its Antarctic background.

When she lived in Hoboken, much of her art focused on that area, using photos of New Jersey buildings and the city’s favorite son, Frank Sinatra.

Now that she is a member of the Rochester community, Rose is inspired by the local area to include images she uncovers here. With her nephew’s help, she is exploring Rochester landmarks to photograph, such as old buildings and waterfalls.

“The Genesee River” features a found image of an abandoned European building with a view of the Frederick Douglass–Susan B. Anthony Memorial Bridge out the windows. The walls of the building are adorned with graffiti of a grinning octopus Rose discovered in a blocked-off station for the now-defunct Rochester subway.

“Who knew there even was a subway here?” she asks with delight. “I snaked my arm through the gate closing it off, all the while shooting images of the graffiti on the walls.” Rose grins at the thought of how, if caught, she would explain why she was sneaking around an abandoned subway stop.

Despite the speed of computer operations, her artwork takes weeks or months to complete. Rose hangs different versions of the montages up on her studio walls, as she lets the combinations “percolate,” and she studies tweaks she can do to make them better.

“There are so many things you can do: you have to know when to stop,” she says. Rose will often work late into the evening in her home studio, which holds her computer and photographic equipment.

Rose quotes the artist Ben Shahn, who once told her that the key to being a successful artist is “having a working spouse.” But, despite the stability offered by her husband’s career, she is proud to have always made a living using her art. Her paintings, etchings and decorative objects were sold through art consultants, interior designers and print publishers. At one point she even went to work in a frame shop to learn to make her own frames.

After years in the Metropolitan New York art scene, which she described as “very competitive, almost cutthroat,” Rose is pleasantly surprised at the welcoming nature of the Rochester community of artists.

When she first arrived in town, she made her way around the buildings housing workspaces, looking for a space for her atelier. Other artists welcomed her and made suggestions, including leading her to her current studio. “If you are having an exhibit, they will send out notices to their mailing lists, and they will invite you to take part in group exhibitions,” she says of the collegial atmosphere.

Rose has been successful on a high level, having exhibited across the country, garnering top awards, including Best in Show at the 2015 International Society of Experimental Art. An etching of owls became a worldwide hit as a UNICEF card. Her artwork has been in many private collections from New Jersey to Texas to Georgia, and even Citibank of New York’s Moscow branch in Russia. Currently, her “Spirit of the Sea” is on exhibition around New York state until November as part of the 2017 Art Exhibit and Competition sponsored by LeadingAge NY.

Listed in Who’s Who for Achievements in Art, she is a former vice president of the National Association of Women Artists.

A founding member of the Hoboken artist co-op, hob’art, Rose has always been active in her community and continues so in Rochester.

Now a resident of the independent living community of St. John’s Meadows, she is a member of the Art Committee there.  “If I’m going to be in a group, I’m not going to just sit back,” she says.

Sitting back doesn’t seem to be in the DNA of this art dynamo. Look for more from Rose at Rochester art events in the coming months and years as she continues to fulfill the prophecy of that second-grade teacher.