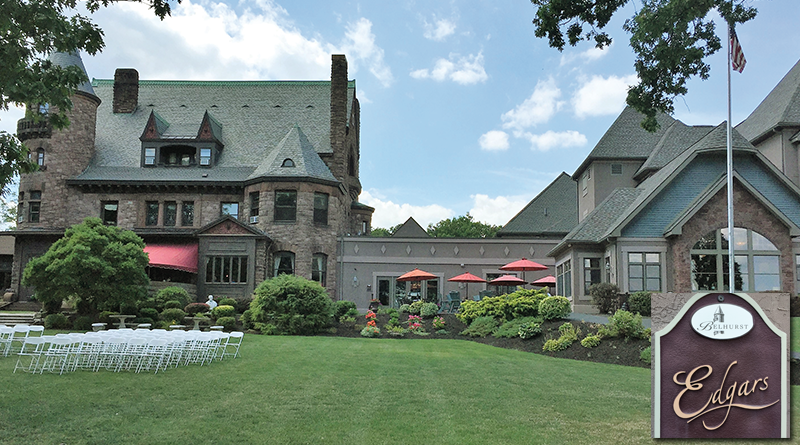 At first glance, it’s easy to write off Belhurst Castle as a gimmick. The stone castle, built in the 1880s, was first used as a private residence, but later converted into a casino, speakeasy, restaurant and, eventually, hotel.

With its grandiose architecture and picturesque perch along Seneca Lake, just outside the city of Geneva, it’d be easy for the hotel’s restaurant to rely on setting alone to draw customers.

But a trip to Edgar’s, located inside the castle, for weekend brunch ($24.95 per person) proved that sometimes, what you thought was gilding can sometimes be solid gold.

We passed through the brick entryway and wrought iron gates that serve as the restaurant’s entrance around 11:30 a.m. on a Sunday to find the buffet already busy.

The buffet spans two rooms — the lounge, which doubles as a bar for the evening crowd, has the desserts, salads and pastries, while the main room houses the breakfast and lunch entrees.

“Start at the grandfather clock and end at the fireplace,” our waitress told us.

Breaking convention, we started in the lounge, where we filled our plates with quiche, toasted bagels with cream cheese and smoked salmon and a selection of salads.

The bagels were pre-toasted, which made me worry that they’d be dried out, but after tender bite, loaded with cream cheese, salmon, capers and chopped egg, my concerns were quickly forgotten.

The onion, spinach and cheddar cheese quiche had a puffy, biscuit-like crust. I wished the bottom was a bit crispier, but the eggs were flavorful and not under-salted, a common downfall for buffet egg dishes.

The orecchiette pasta and heirloom tomato salad was one of the finest pasta salads we’ve eaten. The tiny tomatoes, no larger than a marble, popped with a burst of fresh, juicy flavor. The pasta, cooked perfectly al dente, provided great texture.

We went back for seconds.

We also got second helpings of the roast beef and pit ham sliced to order at the carving station, located near the end of the buffet, in front of the fireplace and next to the made-to-order omelet station.

The beef, a top round roast cooked medium-rare edging on medium, was served with au jus and horseradish. The horseradish was real, honest grated horseradish, far from anything served from a squeeze bottle. My watery eyes after eating a bite with too much horseradish was a testament to its potent flavor.

The bacon perfectly walked the line between flabby and underdone and shatteringly crisp, which is no small task for cooking bacon in bulk. Eggs, home fries, sausage links, French toast and waffles with maple syrup and blackberry compote rounded out the breakfast selections.

With its sweet ginger and plum glaze, the baked salmon was among the highlights of the lunch offerings. Eggplant parmesan and Southwest-inspired stuffed peppers, plus the carved meats, made up the lunch entrees.

The pitfall of eating at a buffet is making sure there’s room for a dessert. It’d be especially tragic to not save room for the warm rum chocolate cinnamon cake. The molten chocolate cake, speckled with plump cherries, was divine.

It would have been easy for Edgar’s to skimp on the vodka in the bottomless bloody marys, or have a lighter hand with the white wine in the mimosas, but the fact that they didn’t speaks volumes about their attention to detail and resistance to rely simply on the gorgeous setting to provide a great dining experience.

Note: A 4.7 percent surcharge is added to each bill. In March, owner Kevin Reeder explained to the Rochester Democrat & Chronicle that the fee was added in response to a $2.50/hour increase of the state minimum wage for tipped workers.