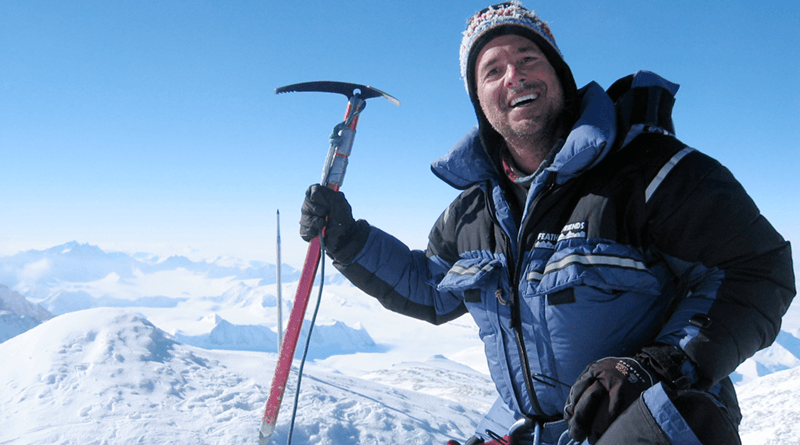 Kevin Flynn has climbed mountains all over the world and ascended Mount Everest twice. He shares his experience and talks about Everest’s 2019 climbing season, one of the deadliest in history

It pays to know the risks before you head up the highest mountain in the world.

“The biggest risk is overextending yourself really, really high on the mountain, deep within the death zone,” says 62-year-old Kevin Flynn. “Hard to recover from that mistake.”

Flynn should know. The Fairport resident has climbed mountains all over the world and ascended Everest twice. The second time, he made it to the peak.

Everest, in the Himalayas, straddles the border of Nepal and China. At 29,029 feet — the highest point above sea level on the planet — the mountain offers myriad dangers, even for experienced climbers. Temperatures at the summit average no more than -2 degrees F. in July, the warmest month of the year. The windspeeds on its slopes annually average over 100 mph, and deadly storms can spring up quickly. Altogether, the weather leaves Everest’s peak accessible for only a few weeks each year.

“It’s typically somewhere between May 10 and May 30, but not all of those days are guaranteed to be good,” Flynn explains.

Even great climbing weather can’t make up for a lack of oxygen. The air grows thinner as you ascend Everest, eventually falling to just under 4.9 psi at the peak — close to a third of the air pressure at sea level. In the “death zone,” which runs from about 26,247 feet to the summit, lack of oxygen begins killing the body’s cells.

Oxygen deprivation can cause a number of physical symptoms, including fatigue, weakness and a persistent, wracking cough, but one of the greatest risks is to the brain. Climbers can suffer such maladies as high-altitude cerebral edema, a swelling of the brain that might lead to nausea, vomiting and difficulties thinking and reasoning.

“Your overall mental acuity is just not as sharp,” Flynn explains.

There’s also the danger of avalanches, and of being crushed by the huge blocks that break away from the mountain without warning.

Veteran climbers advise those who want to summit Everest to carefully train and prepare for the effort, and be in peak condition. To acclimate themselves to the thinning air, climbers usually take two or three trips up and down the mountain, stopping for several days at each of the camps that are located at progressively higher elevations. They also carry oxygen, though that doesn’t completely make up for the effects of the high altitudes.

“Even though you’re breathing the supplemental gas, for every step you take, you might take two or three breaths,” Flynn explains. “It just is a long, slow slog.”

Flynn, who co-owns and is a partner at the Pittsford marketing firm Flynn, LLC — formerly Martino Flynn, LLC — climbed his first mountain just after graduating from high school in Pittsford. He still remembers how it felt to stand atop 4,961-foot Mt. Haystack, one of the high peaks in the New York state’s Adirondack Mountains.

“It was the first time I was above timberline, and I thought, ‘Wow, this is amazing,’” he said. “I kind of fell in love with the Adirondacks, and with mountains in general.”

Since then, Flynn has climbed a multitude of mountains, including the Seven Summits, a collection of the tallest mountains on each of the seven continents that includes Everest and Mt. Kilimanjaro in Africa. He’s also a two-time 46’er, meaning he’s made it to the tops of all 46 of the Adirondack High Peaks twice. The second time, he went with his wife, Maggie, who is also a 46’er. Those mountains rise to at least 4,000 feet.

Flynn first headed up Everest in 2002, but only made it to High Camp. Located at about 26,200 feet, it’s the last stop before the mountaintop.

“I just didn’t feel ready to go for the summit. I was hoping to wait for one more night, and to go the next evening,” he says. “That just didn’t work out.”

Two years later, at the age of 47, Flynn headed up Everest’s southeast ridge route, one of a party of 12 climbers and 25 sherpas. The sherpas, who are native to the Himalayas, hauled supplies up the mountain for the party, and assisted the climbers when needed. International Mountain Guides, which organizes mountain climbing expeditions around the world, also brought in supplies and provided additional logistical support.

Late on May 14, 2004, Flynn, four other veteran climbers and four sherpas left the High Camp for the summit.

“The beginning of that day was actually pretty great,” he says. “I was feeling good, and it was a beautiful, starry night.”

Weather delays and other complications slowed the team’s progress, one sherpa became too ill to go on, and another’s oxygen system failed. Finally, on May 15, Flynn and his sherpa, Mingma Tshering, approached the top of Everest. By then, he was feeling the effects of the journey.

“About the last, maybe, hour or so, it was like someone pulled the plug from me,” Flynn says.

Finally, the pair stood on atop Everest. Flynn didn’t raise his ice axe in triumph.

“I just sat down, and it was like, no real joy at that point,” he says. “I knew it was going to be real hard to get down.”

They managed to return to the High Camp nearly 24 hours after they’d left. Flynn eventually learned that he’d contracted pneumonia on the trip up the mountain, had a fever of 101 and was badly dehydrated.

Only after receiving intravenous injections of fluids did Flynn begin to feel better. All of the people in his party made it back that day.

Other climbers haven’t fared so well. On average, seven people have died annually on Everest since 2000. This year, the mountain claimed 11 lives.

Having his plug pulled while summitting Everest did not drain Flynn’s enthusiasm for mountaineering, and he has continued to make his way up mountains.

“It’s a great sense of accomplishment and appreciation,” Flynn explains. “And then, there’s this great camaraderie — I’ve met many people from different cultures.”

“Mount Everest: Confessions of an Amateur Peak Bagger,” which Flynn co-wrote with former Rochester Democrat and Chronicle outdoor writer Gary Fallesen, chronicles some of Flynn’s experiences. Videos that he has produced about climbing Mt.’s McKinley, Kilimanjaro and Elbrus are sold around the world.

Sometime in the future, Flynn plans to return to Everest with Maggie, but this time he won’t go any higher than the lowest of camp.

“I’d like to see my sherpa, Mingma, who was so great on my summit day.”

What Went Wrong on Everest?

Veteran climber Kevin Flynn offered a few thoughts about what happened in May, one of the deadliest months in Mount Everest’s history.

The torrent of climbers, plus the relatively small weather window for ascents, left the mountain’s slopes overcrowded. One photo showed a huge number of climbers standing chest-to-back in a long line on the ridge leading to the summit. The traffic jam forced some to spend way too long on the mountain. Delays on the return trip from the summit are particularly dangerous.

“The large majority of the accidents and deaths are on the way down, because you’ve spent yourself,” Flynn explains.

In some cases, climbers’ oxygen just ran out. There are reports that some who were on their way up or down the mountain stepped over dead bodies to proceed.

Ascending Everest — and coming back alive — requires mountaineering experience, good equipment and careful physical and mental preparation. To put it mildly, Flynn believes some of the mountain guide companies that are leading expeditions, particularly those based in Nepal, might not have properly vetted those they agreed to take up the mountain.

“If you can fog a mirror and write a check, you can get on the team,” Flynn asserts.

As a result, everyone on Everest’s slopes last May might not have been ready to ascend them.

Say, you’re really fatigued, but the weather is good, so you go on.

“Then, the weather turns bad, and you make a bad decision,” he says. “You get the ‘summit or die’ mentality.’”

That mindset can prove fatal.

Ignoring Others in Trouble?

It has been reported that during the last season, some climbers didn’t stop to aid those who were in trouble on Everest. Flynn, who never encountered that situation, says that if it occurred on Everest this year, those involved might not have realized others were in dire straits. Heavy clothing and equipment, fatigue, oxygen deprivation and other conditions could have prevented them from seeing those problems clearly.

“Sometimes, you just don’t know if the person’s resting,” Flynn says. “There have probably been some other cases where they just thought ‘Oh, that guy, he’s just taking a break. I’m at the edge of my own abilities, so I’m pushing on.’”

On the other hand, Flynn is angered by reports that some climbers might have known others on the trail were in danger, and been able to help them, but didn’t.