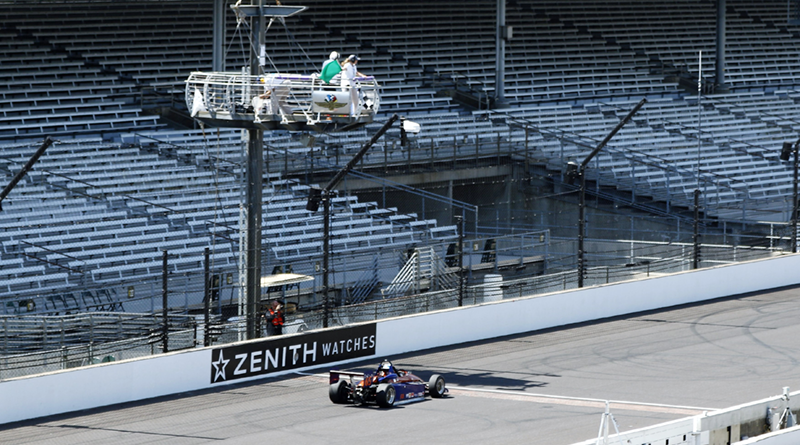 At 68, Mark Green continues to hit the racing circuit. For him, auto racing builds competitive spirit, camaraderie among participants

While 1988 doesn’t seem “vintage” to most of us, Green’s car is indeed considered just that.

It was the car famous racer Bernard Jordain raced in the Pro Super Vee series in 1988 prior to becoming “Rookie of the Year” at Indianapolis in 1989. It’s the car Green took to the Open Wheel Challenge at Indianapolis Motor Speedway in June 2017.

Green, 68, lives in Avon and has been involved in racing since he was just a kid and saw a television show about Formula One racing in 1959.

There was no turning back after that. Green started out behind the wheel doing autocross, which consists of driving a course set up with traffic cones in a large parking lot or airport tarmac.

From there, he got into road racing and now races at Watkins Glen, Lime Rock, and other courses with drivers from the Finger Lakes Region Sports Car Club of America and the Sportscar Vintage Racing Association.

Cars aren’t just a hobby for Green, though. He’s worked in the auto industry in a variety of capacities since 1967. He was a consultant at several Rochester-area dealerships and spent 10 years as a manager and consultant at a dealership on St. Martins in the West Indies.

To some people racing might seem simple — get in a car and go. But it requires more preparation than that. Green makes sure to keep in shape with neck exercises and time on the treadmill, and he does all of his own upkeep and maintenance on his car.

In addition, he has to make sure his safety gear is in top shape. Finally, when he gets behind the wheel, he needs absolute concentration.

This is one of the reasons he enjoys the sport so much. That complete focus allows for an exhilarating, yet almost calming experience. “You just shut out everything else in the world for 20 minutes or a half hour,” Green remarked.

But even though he is alone in the seat, he isn’t alone on the track. It’s the community and camaraderie around the sport that he enjoys more than anything else, and he was quick to praise the people surrounding him.

“I love it for the challenges, driving skills, mechanical talent, but most of all the great people in the sport. Have a problem with your car? Your best competitor will help all he can to get you on the track and then you can race each other hard and share a drink after.

“One driver’s family in one class will watch the kids of another while mom and dad are on track or in the pits. The people in the sport are the best people in the world whether they are your competitors, or the members that put the events on.”

He has plenty of other club racers who agree with him. Mary Hartman, 67, of Chili has been racing since the early 1980s. She started as part of the race medical team at Watkins Glen, but after spending some time with the racers and their crews, she decided to give racing a shot. Today, she races in her Chevy Cobalt and, like Green, has made some great friends.

“I enjoy it very much,” said Hartman of her time on the track. “I think the big draw is the people that you meet. You meet a lot of really nice people. If you have a problem with your car, they are always there to help you out. If you want to go for a beer at the end of the day, there is always someone to sit around a bonfire or picnic table with.”

Green is truly considered one of those “really nice people” Hartman spoke of. Hartman has known Green for several years and admires him as a racer and person. “He’s very dedicated and takes his duties very seriously. If there is a spot on the board or a spot on a committee, he is there to help,” she told this reporter.

Hartman isn’t the only one impressed with Green on and off the track. Mark Sherwood, 59, of Lakeville, also races and has known Green for about seven years. “Mark’s a great guy,” said Sherwood. He will do anything for you at the track. He’s a gentleman racer. He’s out there to enjoy himself and have fun with the rest of the guys.”

Larry Ekstan, 70, of Rochester, owns Ekstan Autoworks on Bennington Drive and has known and worked with Green in the 1980s and absolutely agreed that he is a true gentleman racer. “You got racers out there that are very aggressive, and Mark is just not like that,” said Ekstan.

Green doesn’t just get accolades from his friends and racing colleagues. He’s also been recognized by various racing organizations.

His awards and recognitions include the 1986 Finger Lakes Region’s “Most Improved Driver” award, and he won the 1986 New York State Road Racing Championship in the Formula Continental class. Green has also won races at Watkins Glen, Pocono in Pennsylvania, Nelson Ledges in Ohio and Lime Rock Park in Connecticut.

When Green isn’t racing, he enjoys wine tasting at local Finger Lakes wineries. He also likes to cook, listen to music, and head out on the open road for trips. As for the future, he hopes to continue to improve his driving skills as well as involve more people in the sport. Green was recently elected to the Finger Lakes Region SCCA Board of Directors.

Many Roles in Racing

“There’s a seat for everybody in club racing,” said Mark Green with a smile. “In our clubs, those who can’t drive work as flaggers, timers, scrutineers and organize the events. All volunteer.”

So even if you don’t want to actually drive a racecar, there is plenty of help needed. Green’s wife, Wendy, doesn’t race, but she is part of his pit crew and attends races and other club events.

If you do want to get behind the wheel, you can rest assured that safety is taken very seriously. Every year, racing gets safer with improvements in cars and racing gear. Industry safety standards and safety training for racers and crew continually improve.

Think racing is out of your budget? Mark Sherwood noted that it isn’t nearly the monetary investment people may think and learning to drive a racecar can actually improve overall driving, even on city streets.

“It isn’t as expensive as people think. If you want to learn to drive a street car a lot better and be more aware of your surroundings, it is a really great thing to learn in terms of valuable skills.”

Sherwood, Green, and Mary Hartman would all love to see more people over 50 get involved in club racing in some way.