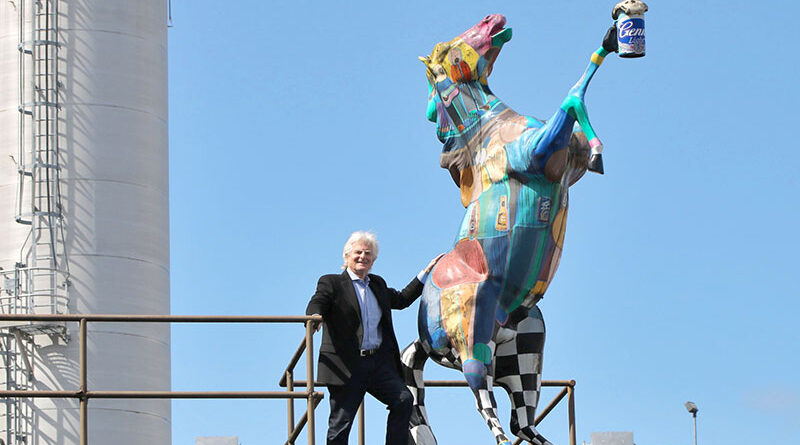 If you could do something that would benefit 114 charities, bring artists and businesspeople together in a project, draw tens of thousands of people into the area, create new dollars for the tourist and scrapbooking industries, add 100 jobs to your business and have just about everyone talking it up … would you hesitate one second to do it?

A self-described “energizer,” he had been presented with a problem and had to go huge or go home.

He needed something to let everyone know there were some new beer-makers in the Roc.

“I was part of the group that bought the old Genesee Brewery,” he said. “We changed the name to High Falls Brewery. In my role as chief marketing officer and the new energizer of the brands, I was looking for something big.”

Something that caught his eye had been done in Chicago, where city artists had decorated and sprinkled life-sized fiberglass cows everywhere.

“It was amazing that the entire city — the entire Chicago area — was so excited about having this community art event with these cows,” the 72-year-old Brighton resident said. “People would take their families around and take pictures. So, I thought, that could be a cool idea to do here, to get people excited about what we were doing about Genesee beer, because the brands had really decreased in sales. It was going to have to be bigger than just doing price discounts.

“We were still making Genesee beer. The reason we changed the brewery name to High Falls was that we wanted to have a different image to attract contract packaging, to attract other brands to sell in addition to Genesee.”

Jacobson had previously been enticed by Marvin Sands to join Canandaigua Wine Co. (now Constellation Brands) and had brought Sands’ philosophy to High Falls. “I learned the importance of giving back to your community in a really meaningful way — not just about giving money, but about listening, making people empowered to do something good in their community.”

But how to make a splash in the community, renew interest in a historic brand and turn a company around, while directly benefitting that community … how could Jacobson crack that egg?

‘Tens of thousands of people were visiting the horses. They were calling our office. They were sending us notes about what a great time they had.’

Statues of cows weren’t going to do it.

But how about horses?

“I thought, this was a major part of the brewery, 12 Horse, so let’s do it — we’re going to do horses. We started to relaunch 12 Horse with different packaging but the same great taste people loved. We had the icon, the horse.” Next, the “Horses on Parade” launch kick-started, and High Falls became a lightning rod for a community fresh off the shock of 9/11 in 2001. The bright colors, cooperative effort of 160 artists and swarms of sponsors came together to create 150 gorgeous horses that popped up everywhere.

Businesses, organizations and individuals sponsored painting of the horses, paying $5,000 to do it — and not owning the horse without another $2,500 investment when the horse was done. The sponsor got to place the horse on a site, do the design, and be in the commemorative book. Each artist was paid $1,500 and got a huge discount on supplies.

“We were able to really energize our community,” Jacobson said.

“Tens of thousands of people were visiting the horses. They were calling our office. They were sending us notes about what a great time they had: ‘We took my grandparents.’ ‘We took our family on an outing.’ ‘We took pictures.’ ‘We have scrapbooks.’ Thousands of people in Rochester were participating. You couldn’t move anywhere without seeing horses. The airport had five. Veterans groups painted horses. Hillel School eighth graders and elementary schools were painting horses. And we found sponsors for them.”

Limo services and tour buses added horse tours and booked business. “There were scrapbook clubs that started up, people were sharing their pictures. Wegmans had more enlargements made at their photo centers than ever in the history of their photocenters. It was bigger than selling beer. It was getting that hometown feeling that we have a great business here, which we hoped would lead people to buy our product.”

All the horses that weren’t bought by their sponsors were finally auctioned off.

“The auction was a big gamble,” he said. “It was a big event and we had 115 horses. We sold them for $4,000 to $20,000 — people wanted a certain horse and they had a place to put it, it was going to inspire something in their business, so they bid high. Also, what gave all of us such a good feeling was that people believed in what we were doing and believed that this was a real community project.”

A book about the horses sold 20,000 copies. WXXI made a documentary about the project.

“We raised $1.4 million altogether — for 114 charities,” said Jacobson. Golisano’s Children’s Hospital. Camp Good Days and Special Times, Hillside Work Scholarship Connection, Wilson Commencement Park and Arts Council of Rochester were the lead charities to benefit, and every dollar promised got there. High Falls increased beer production and new business also flowed, with 100 new workers hired at a place that had been on the precipice of closing.

Today, about 40 horses are still outside, sprinkled around the area.

“Many people kept their horses up five to six years outside, because they were so excited that people still stopped by to see them,” Jacobson said. “Over a lot of years, people put them in their back yards, in their homes, there are still many in lobbies of businesses.” Some horses have been bought and shipped out — a farmer in New Paltz has six of them.

To Jacobson, each fiberglass horse that remains is a testament to a time when Rochester felt different, felt better, felt on the upswing.

“We really did energize the community,” he said.

Photo: “Genny” who adorns — what else? — the Genesee Brewery, raises high a pint of Genny Light to greet the afternoon. Howie Jacobson, who was part of the team that resurrected Genesee through the Horses on Parade campaign in 2001, stands with Genny, which was designed by artist Anne Aderman. The theme of the community event fit happily with Genesee bringing back 12 Horse Ale.