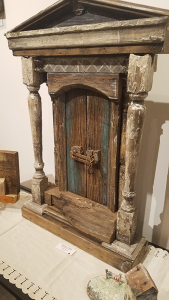 The list of materials used at the November/December 2018 “Remains Memories … Reinterpreted Salvage” art show at A Different Path Gallery in Brockport reads like a list of trash or recycled items rather than a list of art supplies.

But these items aren’t trash; they are the building blocks of the collage and found object art created by local artists Richard Della Costa and Christine Barry. Della Costa and Barry take the lost, the discarded and the forgotten and turn it into art that inspires.

Barry, 72, of Rochester, worked in higher education for 20 years before opening her own business working with multinational companies in the fields of communications and organization development. Despite being busy with her growing business and clientele, she always found time for creativity.

“While working in education, communications and technology occupied me fulltime, I was ambitiously collecting ideas, sketching, photographing, restoring old homes and furniture and taking out my creativity in practical ways in the kitchen, on the house and family. All the while imagining and reinterpreting what I would create given the time,” she said.

Today, though, she devotes all her time to her work as an artist. She finds inspiration in everything from old railroad ties to patinaed sheets of copper. But her real muse is nature and the bits and pieces gifted from the woods and the mountains.

“I owe a big thank you to nature, who has donated most of the gifts that I reconstruct into sculptures,” said Barry.

Indeed, Barry adds pieces of the natural world to many of her sculptures, and close inspection reveals everything from palm fronds to driftwood and strips of birch bark.

“In my estimation, the natural world contains all the shapes, colors and light in great art. It’s all there. Focusing on and truly attending to the natural world reveals marvels. It is the inspiration for all my work,” she said.

Barry lets materials, whether they are natural objects or man-made debris or trinkets, tell her where to take the sculpture she is working on. It’s like when she found an old decaying piece of a wooden fence on Martha’s Vineyard, she saw the subtle shape of a barn in its structure. She then sketches her idea until pure inspiration leads her to the finished draft.

“Once you get your first draft down, it has this little inner spirit that starts speaking to you and tells you what to do next,” Barry said.

Barry also works with oils and displayed two of her first oil paintings at the Different Path show. She’s been taking classes from Rochester painter Steve Carpenter. While she dismissed the paintings saying it was not her best work, they showed not only great skill, but beautiful composition and use of color that complemented her collage pieces.

Many of her found object collage work evoked a sense of the sacred Asian temple design with deeply sloping roofs and dark wooden embellishment. 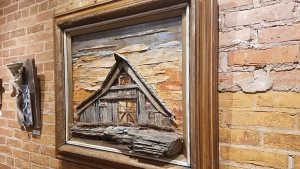 Della Costa, 70, of Kendall, was a film and media studies teacher first at the Visual Studies Workshop in Rochester, then at Monroe Community College, and finally at Edison Career and Technology High School. He retired from Edison four years ago and now focuses solely on his salvage and collage art.

Della Costa uses a variety of materials from many different sources, and quite literally sits atop a virtual goldmine of recovered material.

“I find objects and images in a variety of places — old books, vintage antique shops, junk stores and, probably most productive, an old landfill next to my land,” he said. “Used during the ‘40s and ‘50s as a town dump, it yields all sorts of rusted and ruined materials, bones, toys, chunks of car parts, melted glass and the like. Every fall, I have fun going through the now overgrown area and discovering ‘treasures’ that I might use.”

Like Barry, he often lets the objects lead the way as he creates his work. His piece “Huitzilopochthli and the Ride of Spirituality” came together when he closely examined the dry white rib bones of a deer he found on his property. He added a metallic pedestal, dried foliage, photographs, and a variety of found objects. Soon a shape and an idea took hold and the large, two-sided piece inspired by Aztec spirituality became a sculpture.

“I find it fun to put formerly unrelated objects together and challenging to discover methods to attach seemingly incompatible materials to each other,” he said.

Some of his most current work is more simplistic and he finds himself inspired by a Japanese aesthetic. His piece “Trapped Geisha” only displays a photograph and a smoothed tree branch creating a simple but moving image that plays with shadow, muted color, and natural lines.

Tracy Billings of Kendall owns two of his pieces and was excited to attend the Different Path show.

“I think Richard has two really unique skills. The first skill is the juxtaposition of images to create meaning but also the use of found objects. He uses them as artistic elements. So, rather than using this branch as a branch he is using it as a line. There’s a linear element. What I like about this show is he’s really developed into more sophistication,” she said. 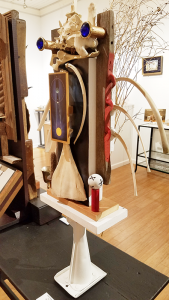 Billings also was excited to see Barry’s art and felt that the two together are a great artistic pairing. “They complement each other because of the rural elements,” she said.

More than just art brought Della Costa and Barry together. Della Costa has been married to Eileen, Christine’s sister, for more than 40 years. Eileen Della Costa is also an artist who draws as well as paints with watercolor, and the sisters were excited to be together for the opening night celebration of the show in November, and Eileen Della Costa said she is an “enthusiastic supporter of Richard and Chris.”

Barry’s husband, Bill, a former art instructor at McQuaid High School, is also an artist working in large scale works. He doesn’t show his work these days, but Barry calls him her “muse.”

Different Path gallery owner Katherine Weston was excited about the show and has a particular appreciation for artists like Della Costa and Barry.

“Artists who work with found objects and materials encourage others to see things in a different light.  An old rusty nail becomes a chimney or a weathered stick becomes a bird’s beak,” she said. “Or sometimes the combination of objects isn’t literal at all, but the juxtaposition of unrelated objects tells a story.”