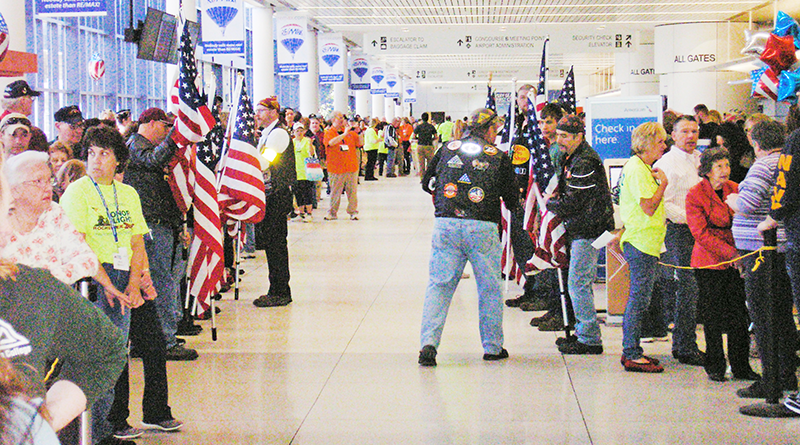 Hundreds lined a long corridor at the Greater Rochester International Airport April 8 to welcome a large group of veterans back from Washington D.C. There was a lot of gray hair in the crowd — and a few wheelchairs — but Pat Gundrum was on her feet, ready to greet her husband, Vic.

“My husband was in the Korean War,” the 78-year-old Greece resident says. “I’m proud of him.”

Vic Gundrum was just one of 43 veterans that Honor Flight Rochester, Inc. flew to Washington that weekend. Founded in 2008, the nonprofit is one of 130 hubs of the Honor Flight Network. The all-volunteer organization transports to Washington D.C. those who served in World War II, the Korean War and the Vietnam War, and veterans who suffer from catastrophic illness.

Once in the nation’s capital, the veterans visit the World War II Memorial, Korean War Veterans Memorial and other sites dedicated to their service. Bands play for them, members of the armed services tender crisp salutes in their honor, and the veterans are feted at a banquet. Volunteer “guardians” carry their bags and in all other ways assist them on the trip — even the youngest World War II veteran is nearly 90 years old.

Though the guardians are asked to contribute $300 toward the cost of the trip, the vets travel for free. Honor Flight Rochester pays the expenses for the six “missions” it flies each year, mostly with funds raised by local organizations and individual contributions.

“Less than 10 percent of our annual revenues from contributions are derived from corporations,” says Peter Glennon, a US Air Force veteran and local attorney who co-founded Honor Flight Rochester and serves as chairman of its board of directors. “The typical contributions are $20-$30.”

In front of the security doors that led to the disembarkation area, Chuck Macaluso, unit commander of the Vietnam Veterans of America Chapter 20 Honor Guard, waited for Honor Flight Rochester’s guests. Thrice wounded in Vietnam, the decorated Marine Corps veteran had a personal reason for being there with the other members of the Honor Guard.

“Everybody knows the history of Vietnam — how there wasn’t a welcome home, and the way the vets were treated,” the 69-year-old says. “Once the chapter started forming up, we said we never want another generation of vets to not have a ‘welcome home’ or a nice homecoming.”

The doors slid open, and the veterans began trooping down the corridor to the cheers of the crowd. Vic Gundrum walked in with his daughter Sherry Martin, who had accompanied him on the trip as a guardian. Drafted into the U.S. Army at the age of 22, Gundrum found himself in Korea.

“I was in the 24th Infantry Division,” he says. “Right up by the DMZ. I was the battalion commander’s driver.”
The DMZ, or “demilitarized zone,” is a strip of land that separates North and South Korea. Though the warring nations had signed an armistice by the time Gundrum’s unit arrived in the area, the area was not completely quiet.

The Korean War Veterans Memorial brought back memories of the terrible weather he and other soldiers experienced in a country where winters can be extremely cold.

“We didn’t have much winter clothing — they weren’t prepared for Korea,” he explains.

After leaving Korea, Gundrum spent two years in the reserves and another two in the inactive reserve. After leaving active duty, he drove for long distance bus companies and for the Eastman Kodak Co., and then steered his own tractor-trailer down the road. Nowadays, the father and grandfather shepherds a school bus part-time for the Greece Central School District. Not bad for someone who turned 83 May 18.

Inducted into the Navy close to the end of World War II, Roger Thielking attended radio and radar training schools in the nation’s capital for 11 months. By the time he finished his technical education, there was little need for it.

“Most other servicemen were being discharged,” Thielking says, with a touch of humor. “We were made ship’s company at the Norfolk [Virginia] discharge center, and we discharged everybody else and then ourselves.”

The visit to Washington brought back memories of those days for Thielking.

“It was reminiscent and nostalgic and very enlightening to see all of the new monuments,” says the 90-year-old father and grandfather, who resides at Heathwood Assisted Living, a community for seniors in Penfield.

Thielking’s son, Karl, who accompanied him there as a guardian, found the visit touching, as well.

“The thing that was highest impact was while we were in Washington, going to the memorials,” he says. “All of the people —just strangers — would go up and thank Dad for his service.”

As the mission drew to an end, local celebrities came together to praise the veterans. Popular WHAM-TV anchor Don Alhart emceed the event, in which Honor Flight Rochester President Rich Stewart, Monroe County Executive Cheryl Dinolfo and State Senator Joseph Robach of Greece all took to the rostrum to laud those assembled for their service to this country.

The assembly then broke and all headed out, though at least one person present sounded as if she was ready for more. After seeing the Korean War Veterans Memorial and the Arlington National Cemetery through her father’s eyes, Sherry Martin seemed willing to look at them again—with another veteran.

“I think it would be a great experience through someone else’s eyes,” she says.

Counting all who disembarked at the airport that Sunday, Honor Flight Rochester has flown 2,477 veterans to the nation’s capital.