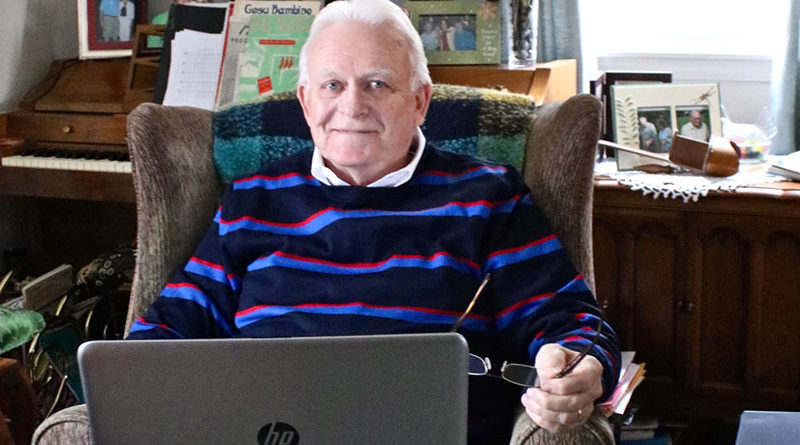 A 29-year old bachelor in divinity school is hunkered over a table in the library with two of his pre-pastoral buddies, doing pretty much the same thing they did when they were sophomores in high school — trying to figure out how to approach a beautiful young woman and ask for a date.

The bachelor is Jeff Crawford. One of his friends goes by the nickname “HOT,” an abbreviation of his name — Howe Octavius Thomas.

HOT is coming up with ruses for his buddy Jeff. HOT knows that Crawford has it so bad for this particular woman that HOT and his friends know only as “DW” — Dream Woman. Crawford saw her from across the street a couple of weeks’ prior and was thunderstruck by her beauty. He hadn’t stopped talking about her since.

“It was like there was a clear path to her standing across the street,” Crawford explained back in the dorm at Asbury Divinity School. Everything else around her faded into a fog, putting her in crystalline relief.

He had it bad, and that wasn’t good.

Crawford described this woman to his friends so well, and so often, that when she walked into the library, they saw her and told Crawford, “She’s here.”

“We then schemed about how I could meet her, but in the end,” Crawford said, “there was no way other than to suck it up and go introduce myself to her, me trying to be Mr. Cool as much as possible.”

The introduction worked. He met the beautiful Beverly.

And their first date?

He took her to a church service.

Yes, life is a little different for a divinity student, but not much. Jeff Crawford, 74, has spent more than 30 years in the pulpit or leading other pastors, and 44 years loving Beverly and raising three kids.

And for the last couple of years of his retirement in Fairport, he’s been writing books about the people who enrich a pastor’s life and the events that were funny when they happened and may be even funnier now.

He got the call to the ministry in the Army after high school, in two distinct dreams where God was telling him to make his path straight to preaching. But the dreams lingered in the back of his consciousness as other things took up his time, until a crisis of conscience gripped him at Jamestown Community College, after he’d left the Army.

“I thought I was going to be some kind of social worker,” Crawford said. “But I had a sense that I wasn’t really happy — all the things I tried to do to make myself happy didn’t seem to work very well.”

This was in the late 1960s, when American campuses were afire with new ideas and conflicts. He started going back to church, as he had as a boy. A missionary from Japan left him a message in a renewal service: “It was clear I had to get right with the Lord. I couldn’t run my own life.”

The “mysterious call to a pastoral ministry” whispered to him again. “I realized God had called me back to a relationship with him,” he said.

Crawford transferred to Houghton College and got a degree in religion, then he chose Asbury Theological Seminary in Kentucky, which is right across the street from Asbury University — where the DW happened to be going to school. Crawford and Beverly were married about a year after that meeting in the library.

What followed were a series of appointments to churches, a district leadership position in the Western New York United Methodist Church, and eventually coming to the Rochester area for his last two churches and retirement.

A big Facebook user, Crawford decided to write about some of the things that had happened when he was leading a congregation. He called them “humorous recollections,” but they were more like a series of, “No, that didn’t happen, did it? Really?”

His stories came out of the churches and activities in Arkport, Barker, Penfield and Canandaigua, and through the many churches he helped administer in the Olean District, from Salamanca to Hornell.

There’s the story about a Christmas pageant where a shepherd got too close to a candelabra and his headdress burst into flames. A nearby fellow youth actor “calmly took two steps, snatched the flaming headdress off and threw it on the ground,” Crawford reported.

In a timely piece of perfect casting, the kid who put out the fire was playing a Wise Man.

The Crawford kids had to sit through sermons three times each Sunday and son Jed schooled himself on what dad was doing to the extent that by the third sermon, he was lip-synching and parroting each gesture that was coming from the pulpit.

When people started reacting positively to his Facebook stories, Beverly told him about a course in book writing being offered through Oasis of Rochester, a program that hosts 500 classes a year for people 50 and older, and many of the courses are free.

Crawford signed up for the book-writing class and met Mary Dougherty of Bootstrap Publishing.

“She was the teacher of my class and offered to meet for 45 minutes with anyone who wanted to write a book. I’d already started so I asked, ‘Why not?’”

That led, in 2018, to “Bat Tongs and other Humorous Recollections on Pastoral Ministry,” Crawford’s first assisted-self-published book, containing 60 stories. Sales were not brisk and he ended up giving away 500 copies to many of the people he had written about.

Last year, “Heart Winds – Finding the Way Home” was published. This was a much more personal work that detailed Crawford’s upbringing, including separating from an abusive father and finding a stepdad who became a forever father. Family photos help paint a picture of days long gone.

It’s in the new book that Crawford hits his stride, and he’s sold enough copies to break even. He introduces readers to his friends Tink, Bozo, Teabags, Leeburg, Gus, Shep, Brownie, Yentz and Ricey, and the picture of growing up in small-town Western New York takes shape.

And sadly, Crawford recently buried one of those old friends.

Reading the book, Crawford’s son, Jed, said he had finally discovered his father in those pages.

Crawford gets up most mornings at 5 a.m. and often spends the first couple of hours writing. He’s working on a third book, “Chasing Golf,” which is about the stories and adventure of his golfing buddies, the Methodist Mulligans, who attack a different golf course in the area every week of the summer. “There’s a fabric in our fellowship,” he said.

Authors find out a lot about themselves in the craft of writing.

“I find I’m capable of being creative,” Crawford said, “in a way that leaves a legacy. I know I can look at life and define the humor in it. I also want to help people understand that the Lord is not out to get us. The Lord is gracious and abounding in steadfast love. The Lord plays a huge role in all my books.”

Photo: Retired Pastor Jeff Crawford writes books about the people who enrich his life and the events.