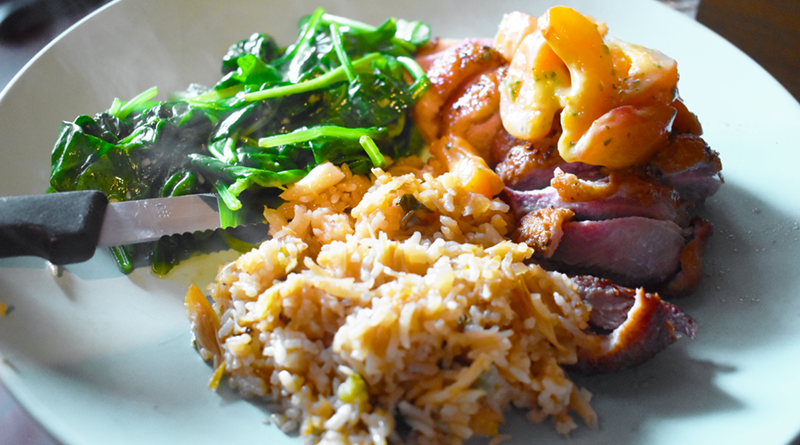 Is the Geneva tavern a place to roost or fly by?

“The apricots are in season right now,” said Lynne, our server at The Red Dove Tavern at 30 E. Castle St. in Geneva.

She had us at apricots, but more about this in a little bit. The atmosphere and shrimp pil-pil small plate ($13) truly kicked off the experience.

The quaint Geneva restaurant, which opened in 2007, is a quintessential Finger Lakes eatery. It’s chic and has a strong local focus. There aren’t copious tables. The décor is on the minimal side — less distracting. The one-page menu is filled with distinct options that yield fine moments of decision-making awkward silence.

And, importantly, the ingredients are fresh.

The day of the meal, the ever-changing menu was very recently updated (Wednesday, July 31, was written on top). The online menu, which had yet to be switched to the present one, was dated six days prior. Clearly Red Dove isn’t afraid of adding and swapping items. Plus, running out of ingredients — there was no more venison this evening — is also a clear indicator of culinary turnover.

Back to the food: Pil-pil is an olive oil-based sauce with garlic and chili pepper. From the context of this, yes, Red Dove’s small plate tastes just like that national chain’s ever popular spicy shrimp dish that is such a “bang” with consumers.

Although shrimp is not local fare cultivated in Upstate New York, the take on the familiar dish is much more satisfying. The shrimp is bigger and perfectly crispy. The pil-pil is light and there wasn’t any questioning the concoction of the sauce.

The food debacle was over sandwiches. Go with the brie or choose the cauliflower? Despite the uniqueness of each of the sammies, the fried cauliflower seemed too good to pass up. Broccoli’s cousin came out crispy, lightly fried. It joined spinach and banana peppers under a blanket of melted provolone cheese and in between the halves of a brioche roll.

The very light sandwich ($13) was surprisingly good. The combination of flavors worked well. Although it wasn’t entirely filling on its own, the distinct house fries filled the void. They were short, thin and crispy. The seasoning and salt were moderate for the appealing shredded spuds.

Cue the entrees. This is where Lynne’s insight came into play. Deciding on the sandwich was not as much of a process. We quacked instead of bleated. The duck breast ($28) with the apricot-miso salad, daily fried rice, and sautéed spinach was chosen over the braised lamb.

Lynne’s insight about the apricots being in season and her knowledge of dishes across the menu was admirable. Plus, she asked how we wanted our duck cooked — also a first for a personal dining experience. The bird was cooked medium per request, and it was a great decision. The bird was very succulent, and the apricot-miso salad that topped the bird was fantastic. It added a slight sweetness with each bite, and it paired well. It almost should be as common as pork and applesauce.

The daily rice was a standout as well. Although there was a bit of a saltiness to the first bite, the flavor and aroma were light, similarly to that of jasmine rice. It’s obvious the lily does add subtle floral hints, but it works well to liven up a familiar side. The spinach was also sautéed really well.

After adding in two beers ($5 each) for the two of us, the total before tip came to just under $71. It’s on the steeper side of a dinner for two with two beers and sharing a small plate, sandwich, and entrée.

But it’s guilt-free. When it comes to eating local and cleaner, prices can be slightly higher. Red Dove presents a place for foodies or the connoisseurs looking for a good meal. The restaurant welcomes patrons of all ages, first dates or the 300th date night, solo or group outings, college kids or families with kids.

Red Dove is a place without televisions and overbearing music. The distraction-free eatery allows diners to focus on each other, conversation, and the food that brings them closer together.