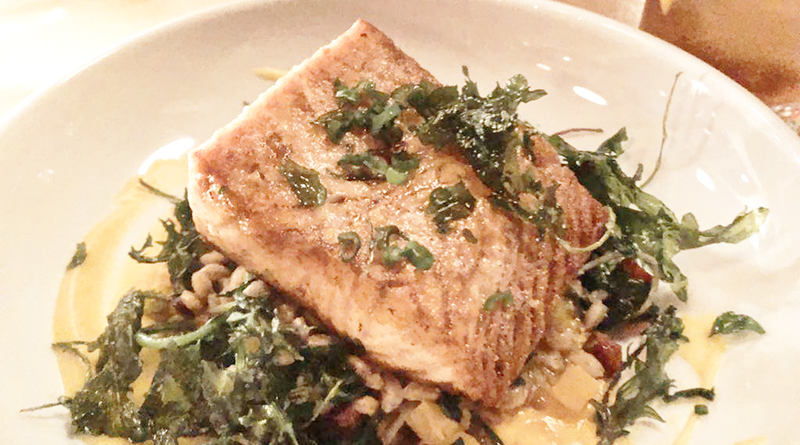 From processing sharp equipment to serving up plates, the historic building at 1290 University Ave. in Rochester is continuing to serve its purpose in the community.

The former saw manufacturing mill, which was owned by the Huther Brothers, is now The Revelry.

The restaurant focuses on southern-style food and craft cocktails in an atmosphere that’s unique for an Upstate New York establishment.

Huther Brothers’ company, which dates back to the 19th century, moved into the University Avenue space in the early 1900s. The beautiful building has incredible bones; more proof that history is worth preserving and revisioning.

The two-story restaurant is dimly lit, but the massive windows provide ample natural light. There is a southern elegance with the décor, especially with chandeliers hanging over the bar. The industrial look allows the classic and modern approaches to blend well. Plus, another cool aspect is the clear floor in the foyer, a window that allows patrons to view the wine-filled cellar.

There is also a subtle Southern Gothic aura to The Revelry as well, but it’s more of a mysterious charm than a negative connotation.

We requested reservations, but were immediately seated without our name being asked. Our arrival time was 5 p.m., when the kitchen opens, which was probably why. Less than  an hour later on this mid-week evening, The Revelry began to fill up.

The two-sided menu featured beverages on one side and food on the other. Whether food or drinks, the seasonal and fall-winter menu had specific offerings. The Revelry specializes in craft cocktails, and that section offered the most options — even more than the large plate entrees.

I opted for the maple old fashioned ($12), because the atmosphere coaxed me to. The classic cocktail was constructed with bourbon, maple syrup and molasses bitters. The ingredients were wonderfully balanced for a smooth sip. The presentation was to the point; no foo-foo garnishes needed.

To kick the meal off, we opted for the carrot soup ($12) under the small plates section. Our server asked if the chef could split the soup for us, which was a kind gesture. The plates came out with only the garnish — crispy pork belly topped with carrot frizzles. Our server and another waitstaff presented my partner and I our respective dishes at the same time. They poured the blend of carrot and poblano yogurt soup, which came out in small carafes, simultaneously.

Between the two bowls, there was a lot of soup. As much as the amount was satisfying for the both of us, the creamy soup was something to take note of. The poblano yogurt added an appropriate thickness and heat. The pork was crispy and melt-in-mouth flavorful, and the carrot straws opposed to the familiar onion frizzles worked really well.

Figuring the two of us were going to split everything, we were presented with two small plates for our entrees — the polenta bowl ($21) and the Akura salmon ($30). The former came out with an interesting presentation. As the name of the plate reads, the polenta, mushroom kombu, squash mostarda, and beet entrée came piled together in a bowl. Although the presentation wasn’t photogenic — and this is the nightmare of patrons who don’t like food touching — the flavor made up for it.

The polenta was very soft and light-bodied compared to what I’ve had in the past, and it was definitely inspired by its southern U.S. cousin, the grits. The dishes are similar to begin with, as polenta uses yellow corn and grits use white. However, considering my northern Italian heritage and frequenting the Solvay, NY, polenta dinners, I’m used to a thicker version. Yet, with all the other hearty ingredients, especially the beets and mushrooms, this polenta faired well.

There have only been a couple times in my life when a server asked me how I wanted my salmon cooked. Yes, The Revelry was one of those times. After asking for a recommendation, we decided to go with medium rare.

We chose wisely, and, wow, was this salmon memorable.

The typical serving of salmon sat on a bed of butternut squash, toasted farro, and chorizo. The fish was garnished with kale crisped to perfection. The fork easily cut through the warm salmon, and each bite was heavenly. Along with the quasi-risotto bed of the aforementioned ingredients, especially the underlying smokiness from the farro, the flavors blended well in this hearty large plate.

The food provided was just enough, and it didn’t leave us too full. This is a good thing, because the cast iron cookie dessert ($8) sounded too tempting to pass up. There were two other desserts, crème brûlée and chocolate cake options, but the cookie was the comfortable middle Goldilocks would approve of.

The maple and bourbon oatmeal cookie (thankfully sans-raisons) was cooked right in the skillet. It was topped with three golf ball-sized scoops of vanilla ice cream and a drizzle of caramel. This was a sizable dessert and easily split, and the occasional boozy bite was as satisfying as an after-dinner beverage.

The Revelry is definitely an upscale restaurant when considering the scope of restaurants, but it is far from uppity and exclusive. The service was great. The food was delightful. Amenities were clean.

Don’t expect to leave with leftovers, but the portions are perfect. And, because of the dim lighting, brought to my attention by my partner, people are able to focus more on what’s in front of them — conversation with others and a focus on the food itself.