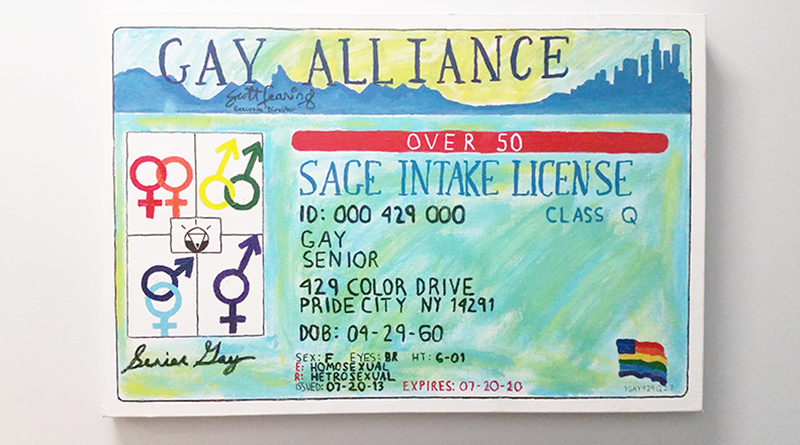 The atmosphere recently at Rochester’s Out Alliance building was joyful and light as people gathered for SAGE’s Tuesday “Lunch & Learn.”

Friends hugged and laughed as they exchanged greetings and caught up on what was happening in each other’s lives. There was a sense of fun, camaraderie, and companionship among the more than 40 people coming together for their weekly lunch and speaker program.

Several of the attendees told 55 Plus that SAGE (Services and Advocacy for GLBTQI — Gay, Lesbian, Transgender, Queer, Intersex—Elders) was not only a group that brought people together for social events, but is also a group that helps them be their true and best selves in a world where depression, disease, and discrimination loom large for LGBTQ seniors.

The National Center on Aging reports that older LGBTQ adults are at a higher risk for several chronic conditions including cancer and cardiovascular disease. Seniors in the LGBTQ community also have an elevated risk of stress that “often leads to higher rates of smoking, alcohol use, drug use, depression, loneliness, and suicide.”

These chronic conditions are a result of the stress and trauma associated with decades of discrimination and societal stigma against the LGBTQ community.

As the LGBTQ community ages, these conditions as well as discrimination in medical and elder care settings force many elders back in the closet, making their social isolation and health concerns even more acute.

SAGE is a national program that started in 1978 in New York City by a group of people who recognized the unique needs of the aging LGBTQ population. Today, there are SAGE affiliates around the country all dedicated to addressing the needs of older LGBTQ adults and their caregivers.

SAGE of Rochester (originally Rainbow SAGE) was founded in 2003 and today has over 400 Out Alliance members in its database. According to Jeffrey Myers, managing director at Out Alliance, its SAGE program is growing rapidly as the LGBTQ senior population increases.

SAGE offers a multitude of services and activities for its members, including everything from the weekly “Lunch & Learn” program to happy hour meet-ups and bingo nights.

Last September, there were over 44 SAGE activities and events in and around Rochester. “Where there is a need, there is always a program,” noted Myers about the variety of programs it offers. SAGE also extends its services into rural areas and hosts programs in Orleans, Genesee, and Livingston counties.

Rochester SAGE members have formed such a bond with each other that when a recent member passed and they received no word from family about funeral services, they held a memorial service themselves to honor their deceased friend.
“People find that they need each other here,” said Anne Tischer, full-time volunteer coordinator of SAGE activities.

Member Scott Benz of Honeoye Falls agrees with the sentiment and said, “I feel so comfortable here.”

But SAGE doesn’t just offer social programs to its members. They advocate for military veterans to improve their access to Veterans Administration benefits, they check in with members of the community who are homebound or cannot make it to meet-ups and social gatherings, and offer support to LGBTQ caregivers.

They also advocate for LGBTQ cultural competency in nursing facilities and hospitals where LGBTQ seniors are at risk for discrimination and misunderstandings that can lead to poor care or mistreatment.

An important aspect of every educational or social program that SAGE offers is safety. Many LGBTQ seniors were either in the closet in their youth or, if open about their sexuality, their friends and family may have rejected them. In addition, many grew up in a time when being gay in America did not just carry the risk of familial and societal rejection, but it also carried a real threat of danger from a homophobic public.

SAGE seeks to create a circle of safety and comfort for everyone who attends its programs. This sense of safety fosters an environment where members feel at home and among a family of chosen friends and advocates.

Regina Phillips of Williamson has been coming to SAGE programs for at least two years and loves the safety she feels at the meetings and programs.

“I come for the support and because I don’t have to constantly look over my shoulder,” she said.

This sense of safety is of the utmost importance. Scott Benz’s husband, John Fudalik, remembers being in a gay bar outside of Buffalo many years ago when someone shot out the windows. He’s glad that at Out Alliance, he can feel safe. Knowing that they are among friends at SAGE events helps Benz, Fudalik, Phillips and others breathe a sigh of relief.

Myers and Tischer told 55 Plus that SAGE also seeks to create ties between the different generations of the LGBTQ community not only to educate LGBTQ youth about what is to come in their older years but to foster a sense of pride in LGBTQ history.

Andy Hirsch was one of the early members of Out Alliance back in the 1970s and was one of the original editors of its publication, “The Empty Closet.” He said there was always a strong sense of intergenerational importance to the work they were doing.

“Everything we did was for the next generation in order to make it easier for them,” he said.

In addition, the SAGE “Pride in Aging” program provides monthly presentations to help the community know what’s ahead as they age so they can approach their older years with the tools to create a senior life that is healthy and safe.

Presentations include instructional advice on navigating health care resources, finding health care providers who are knowledgeable about the unique needs of the LGBTQ elder population, and creating a safe home environment to age in. “Pride in Aging” also seeks to educate service providers so they can adequately provide elder services to a population they may know little about in terms of medical care and sensitivity. This includes teaching them about LGBTQ history and terminology.

Both Myers and Tischer have seen seniors in the community blossom and thrive when they join the SAGE community. For members, SAGE is more than just an advocacy group or a social organization. People have created bonds that extend beyond educational meetings and bingo nights.

“Lives are changed by our programs; we’ve formed a family at SAGE,” Myers said.

The four goals of SAGE Rochester: