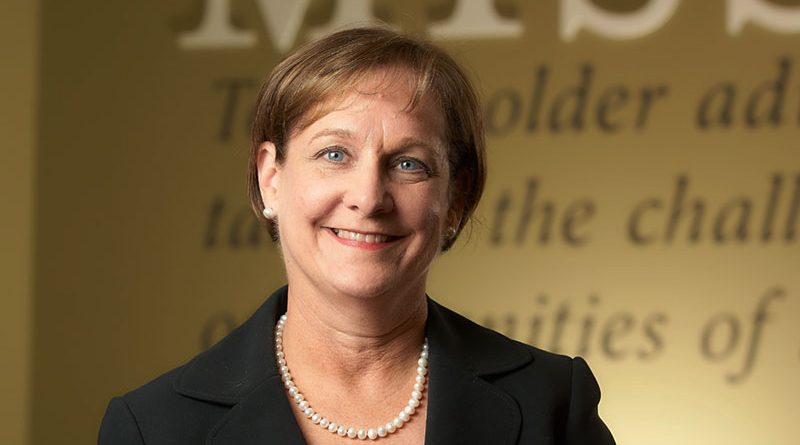 Ann Marie Cook, president and CEO of Lifespan, celebrates the process of aging

Ann Marie Cook, president and CEO of Lifespan, is the child of Irish immigrants who came to the United States on a boat in the 1950’s.

She loves Ireland because it is a country with an amazing history, she said. She has always believed that being a first-generation American is a great spot in the family line.

“I was really raised with Irish culture and traditions. We always had Irish music playing in the house. I still love Irish music today. I was an Irish dancer like all the other first-generation kids. My father played Irish football and we would watch him play. We had potatoes at every dinner. I got firsthand stories about Ireland,” she said.

In addition to a rich culture, she also received a strong work ethic from her parents.

“I didn’t know what I wanted to be when I was a girl. We always talked politics at the dinner table, and I was interested in government. I was a political science major in college. I didn’t know where it would take me. I am very glad that it led me to Lifespan,” she said.

From those early career thoughts, she started off on a very different path than the one in which she has spent the majority of career — the field of aging services.

Cook began her professional life at the Monroe County Legislature as the staff director. Shortly after that, she went to the NYS Senate. She was the chief of staff for Sen. Mary Ellen Jones, directed staff and helped the senator with her legislative agenda.

“I saw and still believe that government can play a role in bettering the lives of everyday people, but it also can hurt people and communities. I am a firm believer that everyone must participate in the governmental process and give elected officials information so they can make informed decisions. That knowledge of government has certainly helped me in my role at Lifespan. Close to 60% of our operating budget is government funded,” she said.

Cook began her Lifespan career as the director of services for vulnerable older adults. Lifespan is a nonprofit organization dedicated to providing information, guidance and services that help older adults and caregivers take on the challenges and opportunities of longer life. The organization has a $12 million budget and employs 160 staff.

She was fascinated with the story about how Lifespan came into existence. Lifespan was formed by a group of nursing home operators who attended the first-ever White House Conference on Aging with President Kennedy.

“At that conference, Kennedy gave a great speech about how we are a young country, but we are growing older. We needed to prepare for an aging society,” she said. “The beginning of Medicare, Medicaid and the Older Americans Act came, in part, from that conference.

“The president also said, ‘adding years to peoples’ lives through the magic of science and medicine, however impressive, was an insufficient ambition for American society.’ He said ‘our objective must be to add new life to those years.’”

Eventually, she became the chief operating officer and worked closely with Fran Weisberg, then president and CEO.

“Fran has been the biggest influence in my career. In addition to being very passionate about aging services, she is very giving of herself. She has helped me immensely and I still seek her counsel. She is a dynamo. Fran is focused, strategic, a great communicator and I am very lucky to have worked for her.

“I worked very closely with Fran and went in ‘with eyes wide open.’ I don’t know if I knew I was ready, but I was certainly interested and was going to give it my all,” Cook said.

Howard Berman, former CEO of Excellus BlueCross BlueShield, was another person who influenced her and provided mentorship.

“Howard once said to me, ‘you will make a million mistakes as CEO. It is your reaction to those mistakes that matter,’” she said.

She says that she thinks about that advice often and is grateful it is still available to her.

Carl Carballada of M&T Bank and former mayor of Rochester, has been a great sounding board for Cook. “We still have breakfast at the Frog Pond on a regular basis,” she said. “He once told me that our inability to make things perfect does not absolve us of our responsibility to make them better.’”

“No leader can be successful if you aren’t confident,” Peartree said.

“She said it is better to make a wrong decision than no decision. She also talked about the importance of women being confident and direct. I learned a lot from her,” Cook said.

Each year, Lifespan puts on a spectacular fundraising luncheon with an accomplished mature adult as the keynote speaker. One of the people that stands out for Cook is Diana Nyad, the American distance swimmer and journalist who, in 2013, became the first person to complete a swim from Cuba to Florida without the protection of a shark cage.

“Nyad is a determined person. I admired her dream and persistence. She taught me that persistence matters,” Cook said.

Another major influence was Helen Thomas, The Associated Press reporter who broke the glass ceiling in journalism as a female.

She covered the White House for decades beginning with President Kennedy.

“Thomas had fascinating stories. It sounds strange but I was struck by how inquisitive she was. She was interested in learning about everything in Rochester,” Cook said. “She also made me think about how much the world has changed. She told a story about Mrs. Eisenhower. She was on a deadline for a story about Mrs. Eisenhower and knew the after-dinner walk route of the president and his wife. She tracked them down and got her story. I was struck that the president and his wife could take a walk around Washington, D.C. just a few decades ago. The world has changed.

He incorporated several of Lifespan’s messages into his speeches.

“Bill Walton overcame incredible obstacles. He stuttered as a child. He could barely communicate with anyone. It wasn’t until he was in college that he really learned how to talk without stuttering. After the lunch that year, he met a small boy who also stuttered. Bill Walton gave him his personal contact information and was going to send the boy information about how he overcame it. That’s the power of kindness,” Cook said.

Other people have influenced Cook and her views on life and career. “First, I love working with older adults. Every person has a unique and fascinating story. Carter Williams, former Rochesterian, is one of the most influential older adults in my personal life. Carter was a social worker and she led the effort for restraint-free care in the country. With her Southern lady-like style, she was not afraid of speaking the truth and became one of the founders of the Pioneer Network — an organization dedicated to creating home-like settings in nursing homes.

When asked, “As you have aged yourself, what do you know about older adults that you didn’t know or appreciate when you were 30?” Cook explains, “Aging is not to be feared. Older adulthood is just another stage of life. Aging truly brings opportunities and challenges. I guess I have learned that people spend way too much time trying to avoid the inevitable. Attitude it everything! If I were to describe the perfect old age for myself it would be, like everyone, I want to live until I die.

“I want to be active, read books, travel, and go to movies and the theater. I guess I want to keep doing everything I am doing now.”

All of Lifespan’s 30+ services are available in Monroe County. Elder abuse prevention/education and assistance for caregivers of people with dementia are available in multiple Finger Lakes counties. Lifespan also manages the NYS Coalition on Elder Abuse and the NYS Caregiving and Respite Coalition. In 2018, Lifespan interacted with 39,000 older adults and caregivers.

“I believe that our challenge at Lifespan is living up to the call of President Kennedy when he said how can we ‘add life to years, instead of years to life.’ In that spirit, Lifespan has done a lot in the last decade to focus on health and wellness,” she said. “We have developed falls prevention programs, chronic disease self-care management, tai chi for arthritis, and more. We created multi-purpose aging resource centers at three different YMCAs.

“I think we need to continue to assist older adults in multiple ways. I also think it is incredibly exciting to be working in the field of aging now. The entire world is aging. We have never seen this kind of demographic shift,” she said. “For the most part, people are ignoring it — more than ignoring; avoiding the topic. It is part of my job to talk about opportunities of aging. Figure out how to support people in their aging and raise the issue so that we can make decisions on how to best support a changing and aging society.”

There are several things that Cook would like to see change.

“Well, it drives me crazy that ‘ageism’ is still acceptable in so many forms. As I watch TV or the movies, people make fun of older adults,” she said. “The stereotypes prevent older people from getting jobs. It hurts all people when that happens. I am hoping that there will be a greater acceptance and appreciation for all people regardless of age.”

“I am really, really fortunate that my job allows me to look at direct services, government policies, funding, attitudes, trends and innovative ideas and try to make something of the information to help older adults. I believe I have one of the best jobs there is,” she added.

Out of the office, Cook is a big sports fan. “We watch baseball all summer (New York Yankees and the Pittsburgh Pirates). In the fall, we love watching the Buffalo Bills. We have a group of people who get together every Sunday and eat and watch the game. I like most sports and find that I can forget about the stress of work when I am watching a game,” she said.

As a mom, Cook can easily relate to parents whose kids have grown.

“I miss my kids every day. I miss the noise and the hustle and bustle of everyday life with kids in the house. When they were little, we were always doing things — like hiking and bike riding. We loved being outside. I was the cheer mom when my daughter was a cheerleader. I also loved that. It was so much fun watching the girls. I also love them as adults. It is fun watching them develop their own career paths. We have lively conversations about politics. Someday, maybe there will be another generation to teach about Ireland. I hope so,” she noted.

Hobbies: Cook’s favorite hobby is reading all types of books and, on a daily basis, an article on aging. She recently read “Say Nothing,” about the Troubles in Northern Ireland.” Cook also enjoys cooking and alternates with her sister for holiday meals. Her exercise regiment consists of working out every day, preferably outdoors for biking and walking. She also likes many types of food and a variety of restaurants, particularly Panzari’s in Corn Hill.