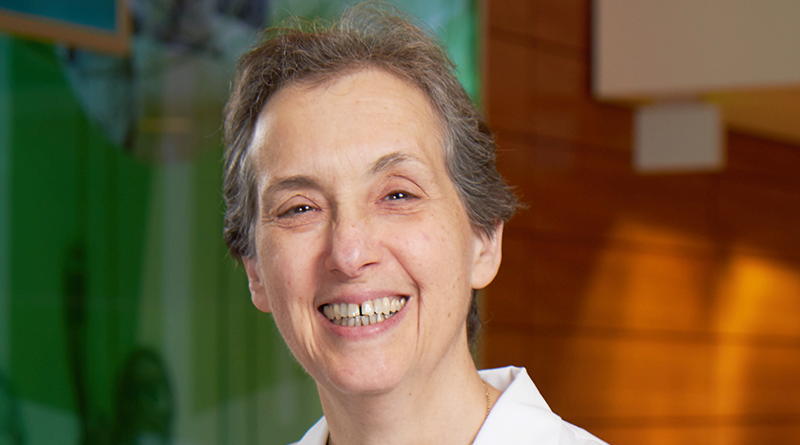 Dr. Nina Schor is leaving her position as pediatrician-in-chief of Golisano Children’s Hospital. She talks about her decades-long career

“It was exciting, and yet…this was something very big,” she says. “You look at it and say, “If I fail, I fail really big.”

Failure doesn’t seem to have been part of the picture. Schor has helped the University of Rochester School of Medicine and Dentistry’s (SMD’s) pediatrics department grow from 110 to 175 faculty members — including 150 physicians — and taken its pediatric research programs in new directions. Her outspoken support for the construction of a dedicated medical treatment facility for young patients helped the Golisano Children’s Hospital obtain its own building. As that hospital’s chief pediatrician, she oversees the treatment of about 85,000 children each year. Last October, Schor announced that she plans to retire in July of this year.

The drive to succeed seems to run deeply through Schor. When she was growing up in Queens, her father, a Yale graduate with degrees in chemical and mechanical engineering, strongly encouraged his two daughters to aim high. Her mother, on the other hand, offered unconditional acceptance. For Schor, it was a good balance.

“Because of who I would like to spend every waking moment with, I decided to practice neurology with children,” Schor says. “They don’t hold anything back—what you see is what you get.”

While doing neurology and pediatrics rotations at the famed Memorial Sloan Kettering Cancer Center, Schor treated a young boy who was suffering from a cancer she’d never encountered before. The 5-year-old had been diagnosed with a neuroblastoma, which afflicts the cells of the nervous system.

Unlike cancers that develop when mature cells have been subjected to carcinogens or other insults, neuroblastomas form while nerve cells are still growing and maturing. The affected cells do not develop normally, and multiply out of control.

Neuroblastoma is among the most common of childhood cancers, and is often fatal. When Schor met her patient, his tumor had compressed his spinal cord, leaving him unable to move his legs or control his bladder and bowels.

“It was an emergency,” Schor recalls. “He was brought in to at least decompress the spinal cord, back then by surgical means.”

At that time, surgery was normally followed by a standard treatment regimen.

“We treated neuroblastoma at that point, and often quite unsuccessfully, with the same chemotherapeutic agents that we used for any other cancer,” she explains.

Though the boy was eventually cured of the cancer, the experience drove Schor to turn her attention as a researcher to neuroblastoma.

As an assistant professor of pediatrics and neurology at the University of Pittsburgh School of Medicine, she continued to study that form of cancer, along with other childhood afflictions and their treatment.

At that time, the medical school’s fledgling pediatric laboratory research program consisted of four physician-scientists — including Schor — who worked in a 300-sq.-ft. lab. Though the University of Pittsburgh was nationally known for its research programs, the efforts of its pediatric department were a bit limited in scope.

“What it had was very high-quality, but all of it was very directly clinical research — clinical trials, new drugs, whatever,” Schor explains.

Valuable as those research programs were, they were not the kind of “bench,” or basic research programs that engaged Schor’s interest. Bench research can produce the foundational results from which new medicines and medical treatments might eventually be developed.

“You’re looking into mechanisms of disease, but you’re not at the point where you’re ready to study something directly in the patient,” Schor explains.

Schor helped focus the pediatric research department’s efforts in that overall direction as she advanced to progressively higher academic and administrative positions at the university.

“For many, many years my group and I were looking at some of the toxic effects of chemotherapies,” she explains. “[The research] was not at the point where it was even near the patient, but it was driven by the problem and the question that the patient raised.”

By 2006, Pittsburgh’s pediatric research program was a nationally recognized powerhouse. Schor had become the head the division of pediatric neurology, which had grown from a total of six to 21 faculty members.

But she was ready for a change.

“I began to get, I guess ‘restless’ is the right word,” Schor relates. “I realized that I really enjoyed empowering and networking and mentoring people — I guess that’s what management really is — creating a whole that’s greater than its parts.”

When the chance came to head SMD’s pediatrics department, hold multiple professorships at that institution and become chief pediatrician at the Golisano Children’s Hospital, Schor saw a chance to act on her desires. Though the pediatrics department’s researchers had accomplished a great deal before she arrived, Schor felt the need to encourage more and better bench research.

“Because we owe it to all of those people who came before us…we have to ask, ‘What could we do to make it even better than it was before,’” she says.

For example, though individual investigators were doing high-quality work, they often did not realize how useful their efforts could eventually be. Schor set out to create a pipeline from the department’s labs to its clinics, and thence to the community.

“You could actually design a therapy and bring it up through the point where you bring it out into the community,” she explains. “Building that culture was something brandnew in the department.”

At the same time, Schor used her expertise and personal skills to mentor the budding physician-scientists in her department.

Physician Jessica Shand, assistant professor of pediatrics in URMC’s division of hematology-oncology, first encountered Schor about 10 years ago, when she arrived at URMC as a pediatric resident.

“It was clear that she had built her own research enterprise essentially from the ground up, and had been very successful at it, but was also very successful at being a leader, a teacher and a mother and wife,” Shand says. “That was exactly the kind of role model that I was looking for.”

Schor took on the role of mentoring the young physician-scientist, and continues to do so to this day. That support helped Shand advance in her career, while fulfilling her own roles as wife and mother.

“One of the major positive predictors of women in science and medicine is having mentors that tell them to keep going,” Shand says.

Schor also gave her energy and time to raising money for the construction of the new Golisano Children’s Hospital building. Back when she arrived at URMC, the institution occupied one and a half floors of Strong Memorial Hospital. As one of the main drivers of the effort to construct a stand-alone, child andfamily-centered facility, Schor helped drum up popular and financial support for the construction project. Call it a variation of the fried chicken circuit.

“I spoke to Rotary clubs, the Chatterbox Club,” she says. “I went to schools, and I spoke to alumni and potential donors.”

In addition, Schor and others involved in the project talked to pediatric patients and their families about the features they hoped to find in the new hospital.

“The littlest kid said that the worst thing about the old hospital was that all the artwork was at eye level — for their parents,” Schor explains.

The new, eight-story, $190 million home of the Golisano Children’s Hospital, which opened in July of 2015, is designed to meet kids’ particular needs for medical care — and more.

“We created an environment that’s conducive to healing, allows families both privacy and comfort, and allows children to control some aspects of their environment, so that it’s child-friendly, and colorful and playful,” Schor asserts.

Physician Mark Taubman, URMC CEO and dean of the school of medicine and dentistry, lauded Schor for helping make the new Golisano Children’s Hospital a reality.

“It’s been the dream of every chair of pediatrics throughout the years to build a stand-alone children’s hospital, and the fact that it came to fruition on Nina’s watch is no accident,” Taubman says. “She championed the project and ensured that every detail was designed with patients and families in mind.”

Oh, and the new hospital’s artwork? Cute figures and other features that kids find attractive are on various walls at eye level—for 2-year-olds.

All along, Schor has continued to engage in the kind of research that first drew her. Last November, in recognition of her distinguished contributions to neuropharmacology and developmental neuroscience, she was named a fellow of the prestigious American Association for the Advancement of Science. Even after she retires, she hopes to continue working in the lab.

“I will likely be taking a sabbatical in order to bring new technologies to the laboratory that will enhance our studies of neuroblastoma,” she explains.

On her off time — what there is of it — Schor takes in the occasional Red Wings game, writes poetry and plays the piano for relaxation. Though she studied classical works, jazz seems to fit her busy lifestyle more.

“I improvise — I sit and noodle around,” she says.

Winding Up on the Pitcher’s Mound

On a shelf in Dr. Nina Schor’s office sits a baseball with a story.

Schor had just joined the University of Rochester Medical Center as the chairwoman of its pediatrics department when the Rochester Red Wings asked her to throw out the first pitch at a game.

“They had a fundraiser for our intensive care unit,” Schor explains.

She thought she was ready to let fly at Frontier Field, but Schor’s two sons advised her to practice before heading to the mound.

“They were like, ‘Ma, ma, do you know how far the distance is from the pitcher’s mound to the catchers mitt? You need to practice in the backyard,’” she relates.

Undeterred, Schor headed off to the field at the appointed time and threw. The ball landed right in the catcher’s mitt.

“I went back up in the stands, and I said ‘Did you see what Mom did?’” Schor says.

Her sons had a ready answer.

“They were like, ‘Did you see how far out he had to put his hand to catch that,” she says, laughing. “You can’t win.”