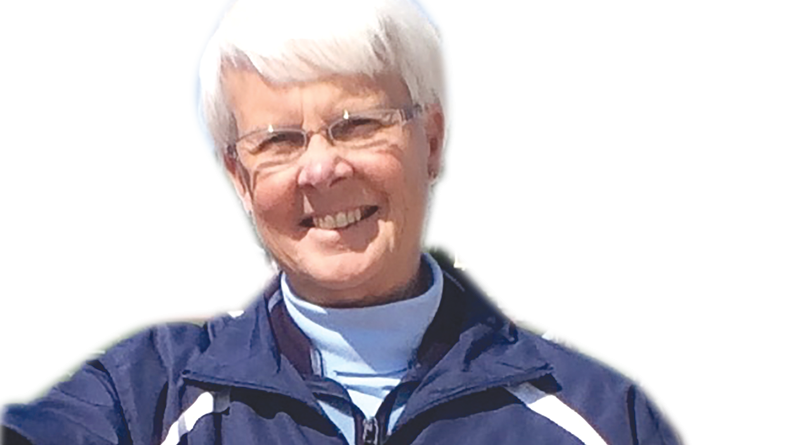 There was a time when school sports teams only consisted of boys.

Not only did Linda Berner Adams help change that, she also changed the lives of generations of girls to come. From her days teaching health and physical education in the East Irondequoit Central School District, to creating and coaching team sports for girls, to top-ranking wins in New York state, to her induction into The College at Brockport: State University of New York’s Athletic Hall of Fame, Adams epitomizes leadership.

“In the beginning there were no girls’ teams or leagues, and I found myself loving teaching and coaching so much I started my own girls’ team sports,” said Adams, 69, of Rochester. “Back then you called a friend, you were your own official, you found your own team, and were at the mercy of a field. There was no pay.”

Adams was familiar with the gap in women’s sports from an early age when she longed for a chance to play on a team for fun while growing up in Buffalo. Although she thought she would eventually become a veterinarian or pediatrician, her natural love of sports was revealed while studying health and physical education at The College at Brockport.

She graduated in 1968 with a degree in teaching then acquired a master’s degree in physical education from Brockport in 1991.

“When you are trying to figure out what you want to do with your life, you might end up in something in an odd way,” said Adams. “Growing up, there were no opportunities for women to play sports in school. But in college, I was finally able to be on a real team for women, with coaches, uniforms, games and officials. That changed a lot for me.”

Her ability to participate at Brockport set Adams on a mission after college for girls to experience what it feels like to participate on a viable team.

But it wasn’t just winning that was her focus. Adams wanted to bring many things to the forefront for both students and parents, including life skills learned when playing a team sport — confidence, self-value, understanding, respect, determination, dedication, community, unity — just to name a few.

Adrianna McNally of Fairport recalls Adam’s lessons in character and sportsmanship as applicable to daily life, such as leading by example, working hard, earning respect and being proud. McNally, Eastridge Class of 1988, went on to coach with Adams and teach physical education in the Irondequoit school district. Many of Adams’ former students continue to be part of her life.

“Linda Adams was my field hockey coach from seventh to 12th grade, as well as someone who remains a trusted friend and mentor to me to this day,” said Shanon Luongo, of Rochester, Eastridge High School Class of 1995. “It’s difficult for me to sum up how I feel about her in only a few words or thoughts. The feelings I have about how she impacted my life are profound.”

Adams’ commitment to excellence in teaching students that they are valuable as a person and not just as a team member stayed strong from the classroom to the field. Her goal was to present information so that everyone would feel good about participating. She said she might alter the rules a bit during class or practice so that everyone would be included and then discover they are able to be part of the whole, and can work together despite differences in abilities.

This was especially important when physical education classes became co-ed. Adams quickly learned to work both with and around the new protocol.

“We had different levels during classes — recreational or competitive. For anybody who never played anything before, I tried to make it simple enough so that it falls into place. If we could convince them to play, we would try to help them catch on with the basic skills so they would want to do it,” said Adams. “When I caught them doing something right, I encouraged them. Kids don’t have that happen as often as they should which is what helps them feel more comfortable and build confidence. That’s when they feel safe, and feel like this is something worth hanging in for.”

More than just a coach

Adams maintained her supportive philosophy throughout her entire career, even when she stopped teaching for brief periods when she had her children. Although she was on leaves of absence, she continued to coach. She brought her children with her to practices and games. One of her field hockey players, Kyle Shakow Smith, Eastridge High School Class of 1996, loved Adams so much that she convinced her mother to babysit Adams’ son so that Adams could coach her team. That not only inspired Adams to continue coaching but it showed her female players that their roles in life can be diverse.

That message was so strong for Smith, she went on after college to become Adams’ junior varsity field hockey assistant coach for 20 years. When Smith’s daughter was old enough to play field hockey, she not only coached her field hockey team at Webster Thomas High School in Webster, but became the school’s varsity field hockey coach to this day. Smith’s team made it to New York state’s Final Four championship in 2014.

“Linda was my gym teacher in ninth grade, and the girls’ basketball coach. I did not think I was good enough to try out, but Linda called me at home and encouraged me, which changed my life,” said Smith. “She was an inspiration, great mentor and positive influence in my life.  She is an icon in the sport of field hockey. I continue to coach going on 30 years, and still do all the drills she taught me, motivate the way she taught me and coach saying the same things that she used to say. Needless to say, she made a lasting impression on me.”

The words of Luongo and Smith echo those of the hundreds of women who Adams influenced, as a coach, mentor, role model and friend for more than 30 years. Her impact changed the face of team sports and athletics for women from the junior high school level and beyond in the Rochester area, eventually earning her induction into The College at Brockport’s Athletic Hall of Fame in 1993.

The accolade comes from her impressive record of field hockey wins over 23 years including many county and division titles, numerous coaching awards and two bronze medals in Empire State Games. She also served on the panel at the Genesee Valley Sports Medicine Symposium, coached more than 30 players who continued athletic careers in college, and maintains a reputation as an outstanding instructor and excellent role model for students.

“I have lived through it all, as have all of my teams. My vantage point is almost 50 years. Sports have changed, equipment, expectations, even parents,” said Adams. “It’s about working together for a common goal, and helping kids achieve things they never thought were possible.”