I’ve had a string of bad experiences recently 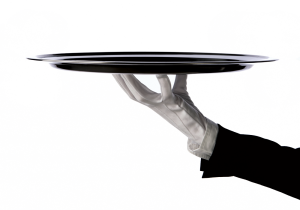 I stopped by Wegmans the other day to pick up a seven-inch sub (my favorite, capicola on that delicious wheat bread). I took my purchase to a nearby register where a woman was frantically pounding at a calculator; another was checking on pizza in the oven, and a third was behind the counter looking around, including right at me. She made no move toward me. It probably wasn’t her job.

I was the only one in line at the time. Almost a minute passed when the woman on the calculator looked up briefly and said, “Be right with you,” then returned, again pounding at the numbers on the calculator.

Another minute passed, and, by this time, three more customers had backed up behind me. I looked at them, and they looked at me in exasperation.

Regrettably, too often these days, when I come back from shopping, I feel disrespected, ignored, sometimes even invisible. I am agitated and riled.

My parents owned a corner grocery store when I was a kid. My brothers and I worked in that store while we were growing up. My father drilled it into my head every day: The customer comes first. Whatever you’re doing, drop it, and take care of the customer. The customer is always right.

Even though I am up there in age, I am not an unreasonable shopper. I am polite, say “please” and “thank you,” and I’m respectful.

I went into a convenience store the other day to buy a candy bar — my favorite, Chunky. When I went to the counter with my $5 bill, the woman muttered, looked up, but said nothing. Nearly a minute went by while she continued to do some chore she apparently had started before I arrived at the counter and appeared annoyed that I had interrupted her.

I put down the Chunky on the counter and walked out. I didn’t make a scene, even though I was steaming. No sale. Her competitor down the street was going to get this sale, even if it was for only a dollar and some change.

Customers may forget what a service rep said, but they will never forget how a customer service person made them feel.

It’s almost as if the term “customer service” is an oxymoron for some of these clerks. Is it their fault, or have they not been adequately trained to understand that the customer must come first? What I would like to tell them — and what their bosses should be telling them — is that without the customer they don’t have a job. So whatever that oh-so-important task was that superseded taking care of the customer, it becomes irrelevant if there are no customers to serve.

I can’t tell you the number of times that a clerk has given me change or handed me my credit card receipt without a word. No “thank you,” not even the half-hearted “have a nice day.” Nothing. What angered me after the fact is that I thanked her! For what? Her rudeness? I do not feel very special at times such as these.

When you call by phone to make a complaint, your first challenge is to make it through the gauntlet of prompts.

I called one of my medical providers recently to report that I had been billed for a service for which I had sent a check several months earlier. “Let me look into it,” the customer service person said. After being on hold for about two minutes listening to in-house promotions and insipid music, I was told there was no record of the payment.

“Your office cashed the check,” I told her. She insisted that there was no record of the payment. I reminded her again that the check had been cashed and my account debited. She asked me to mail her a copy of the canceled check. I asked her why I had to go through the effort to locate the canceled check from my electronic checking account, then spend 49 cents on a stamp for an error that was not of my doing.

“But, sir,” she said — the “sir” dripping with sarcasm — “this is our policy.” “Well,” I told her with equal sarcasm, “my policy is for you to find the problem and fix it. Here is my phone number. Let me know when you do.”

She called me the next day to report that the “missing” check had been “found.” She said that an unnamed employee had coded the check incorrectly, and the payment was credited to another account. There was no apology or concern about the trouble I had gone through to resolve this issue. Somehow, in her mind, I was the unreasonable one.

What infuriates me and others is when customer service reps pass the buck by pointing fingers at a computer glitch, a new employee or some internal issue.

One of the main problems for poor customer service is that the reps are not empowered to solve issues. When reps are given authority to do whatever it takes to make the customer happy, customer satisfaction rises exponentially.

Surveys show that more than 70 percent of complaining customers will return to a store or business if the problem is resolved in their favor. That number grows to 95 percent if the issue is resolved on the spot.
How many times have you written a letter and never even gotten the courtesy of a reply? Many customers just throw up their hands in disgust and resignation. Rather than duke it out, customers figure it’s easier to take their business elsewhere.

While service providers should have a keen eye when a customer is exasperated, most have the sensitivity of a stone, or, many just don’t care.

When I asked a customer service provider once why he didn’t seem to care about my problem, he said, with surprising frankness, “It’s tough to care too much when I’m getting paid $7.25 an hour.”

Alan Weiss, author of “Million Dollar Consulting,” said it best: “Ask your customers to be part of the solution, and don’t view them as part of the problem.”