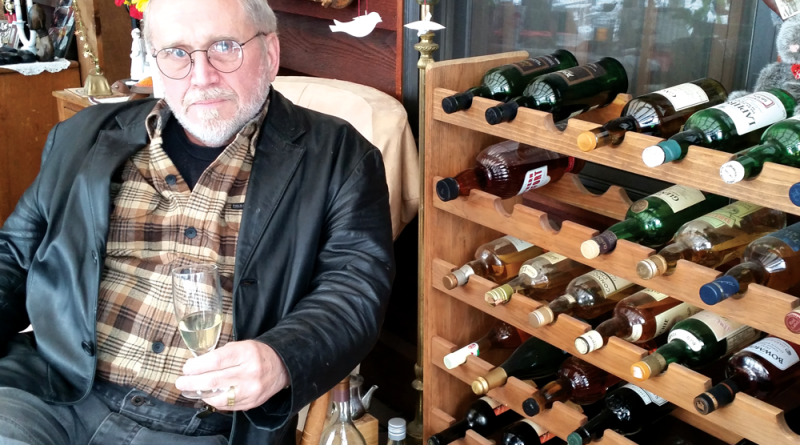 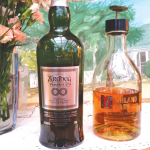 Scotch is a mysterious drink, shrouded in unclear origins. What we do know is the first written record of distilled spirit in Scotland was in 1494, by King James IV to Friar John Cor, ordering about 1,120 pounds of malt to make aqua vitae, “the water of life.”

This much malt would produce about 400 bottles of today’s whiskey.

Five hundred years later, in the 1990s, two Rochester-area men found themselves with almost as much Scotch as King James: 360 bottles to be exact. Today, of the once-kingly collection, only about 30 bottles are left. “I can’t even think about what they’d be worth now if we still had them,” says Jim DeCaro. But from the beginning, DeCaro and Alan Senior decided to spend the Scotch on friendship and enjoyment instead of saving it.

DeCaro, for example, once had a $500 Black Bowmore, now worth at least 10 times that. But that 1964 bottle of Black Bowmore, from the first recorded distillery on Islay (pronounced ‘eye-la’), Scotland, and of which only 827 bottles were produced, is long gone. “We actually drank the last dram of that the morning our first grandchild Alexa was born. And that was our celebration,” DeCaro happily admits. “We decided we are never going to buy whiskey to put it aside. Whiskey is for tasting; it’s not for investment.”

And indeed there is no talking to him about whiskey without being offered a taste from his cabinet. DeCaro pours me a small Scotch to taste, a golden yellow Ardbeg. It’s from a location on the south coast of Islay, said to have once been the hideout of a gang of smugglers before its officially documented start as a distillery in 1815.

“Now I want you to taste that, just sip it,” he suggests. “Taste the smokiness in there. You can almost chew it.”

A sip of whiskey, breathed in at the back of the throat, offers an immersive olfactory experience, like stepping into a sauna or pulling on a fine cigar. But another, maybe surprising way to experience single malt whiskey, is to water it down.

“If you really want to analyze,” says DeCaro, “we will pour a glass and add as much distilled water as there is whiskey. If whiskey is compact, it stretches the taste out and some of the subtleties you may have missed.”

The Scotch whiskey halved with water does spread the taste. The flavors present themselves almost in layers, one at a time. They have been characterized as “smoky,” but also as “salty,” or with a “medicinal bite at the finish.”

Smokiness in Scotch has to do with how “peated” it is. Large parts of Scotland are covered with peat bogs, layers of decayed vegetation formed over 1,000 to 5,000 years. When dried, this forms hard briquettes similar to coal. Barley is dried over peat-reek, the smoke of burning peat, infusing a distinctive smokiness in the grain. Some whiskeys are lightly peated; the Ardbeg I’ve just tasted is heavily peated.

Not all Scotches are peaty though. Malted barley and water make the simple basic ingredients of whiskey, but the final product picks up unique character and complexity in many more ways. A whiskey barrel will, for example, be charred first.

Later on, through the process of aging, the whiskey soaks in and out of the wood. This process pulls out the taste of charcoal, or the sweetness of wood sap. It can even breathe in flavors from prior inhabitants of the barrel: a sherry, for example.

“You have the cellar it’s aged in,” says DeCaro. “I walked into the Bowmore cellar and I took a sniff. You get the earthy aroma that is in Black Bowmore. And if it’s aged by the sea, and you have the sea breezes blowing in and the light and seaweed, that gets in there too. Permeates. The barrel itself breathes. When it’s hot, it expands, when it’s cold, it contracts. And you lose some of the whiskey in that process. That’s called ‘the angel’s share.’”

These fascinating complexities that vary bottle-to-bottle, year-to-year, location to location, are what DeCaro and Senior explored once a week for many years in what they call their “Wednesday Night Tastings.”

“The Wednesday Night Tastings were about friendship more than anything,” says Senior. “They started in 1980, but we had been good friends since 1972. We would sit and discuss the widest possible range of ideas and topics. With two high-pressure jobs, but in unrelated fields, it gave us a chance to unwind, yet still to bounce work-related ideas off one another if we so desired.”

DeCaro, who holds a doctorate in instructional technology, has taught on the faculty of Rochester Institute of Technology’s National Technical Institute for the Deaf since 1975, including as interim director and dean in the ‘90s, and interim president in the late 2000s. He has authored or co-authored dozens of academic papers, mostly in the field of deaf education.

But it was his tenure as visiting faculty to the University of Newcastle-upon-Tyne (Britain) in 1980 where he discovered his other great passion: Scotch. It began with a weekend trip to the Isle of Orkney, where he and a couple friends tried their first single malts. It was a Scapa, and though it was 36 years ago, a Scotch lover never forgets his or her first good Scotch. “It was a new experience, for sure,” DeCaro reminisces. “I’d only had blended Scotch whiskey before. Scapa, though light, was complex. I was struck by the complexity.”

After that, he was hooked. He’d drive to duty-free shops in London, Copenhagen, Sweden and Stockholm. Senior, a professor in the department of biochemistry and biophysics at the University of Rochester, was collecting as well. At the height of the collection, they had at least one bottle from each of the extant 129 distilleries. “We were collecting them everywhere we went,” says DeCaro. “We had all but one, and that one was held by a family — an old cask in a closed distillery. And it was $3,000 for a bottle.”

“That’s a little too far,” said their wives, and the men reluctantly agreed. 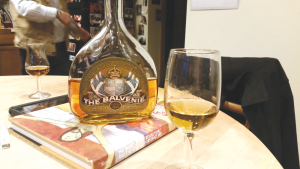 Scotch collecting isn’t cheap. It takes time. So if you want to get started, it’s wise to have a partner. DeCaro and Senior were able to try and enjoy so many scotches together because they split the cost, including the fun of the travel and discovery. DeCaro, having tried nearly every bottle out there, says a Highland Park is the best all-around whiskey and a good place to start. It has a little bit of everything.

“Start with a Highland, or a Macallan, which has a slightly sherry taste which people tend to like. Then move on to an Islay whiskey, not heavily peated, like Bruichladdich,” he said.

You can purchase a 12-year-old Highland Park, a 12-year old Macallan, or a Bruichladdich for around $60.

“I remember the first night when we moved into the new all-glass sunroom, around 1990, I think, and a full moon came up over us. What a beautiful evening, promising so many more in the future.  How lucky I was to find Jim, to find such a pleasant hobby in Scotch collecting, and thus to find relaxation and repose every Wednesday night for more than 35 years.”