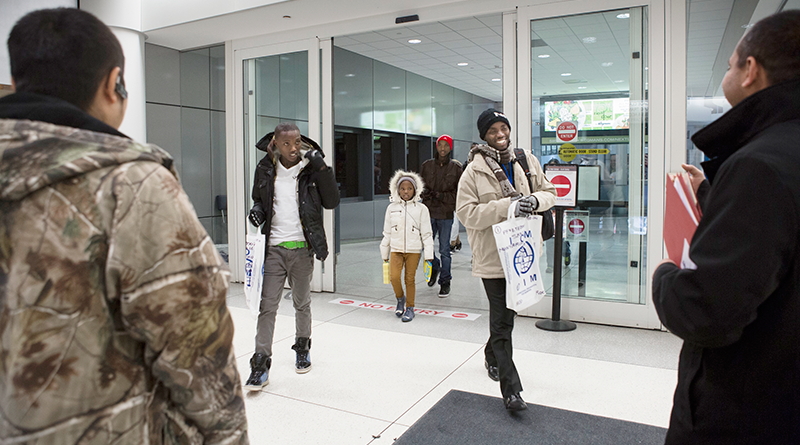 As if being a special education teacher wasn’t stressful enough, Lisa Hoyt wanted to get out of her comfort zone when she got a degree in social work at Keuka College after years as a teacher at the Harley School and Hope Hall.

But she could not have imagined the new challenges she would face as director of refugee and immigration services for Catholic Family Center (CFC). She helps refugees from impoverished and war-torn nations escape terrorism, political, religious and economic oppression, and find a new life of safety and hope in Rochester. Still, she says: “I’m happy I chose this path instead of what I was familiar with.”

Refugee resettlement is an important part of American history and Rochester’s too. Italian and Polish neighborhoods were some of the first to be established here and Cuban, Somali and Bhutanese neighborhoods have been established more recently.

“As the community’s sponsoring agency for all refugees resettled in Rochester, we at CFC see first hand how our community is enhanced by the arrival of our newest Americans who come seeking peace and opportunity and through their diversity bring new color to the fabric of our community,” said CFC president Marlene Bessette in a press release in response to President Trump’s January executive order restricting the number of refugees allowed to come to the United States from specified countries.

Rochester has been a destination for over 15,000 refugees in the past 35 years and for 1,100 in 2016. As Hoyt explains, it’s a desirable destination for refugees since “we have established ethnic groups and the education, housing and employment capacity to make assimilation here successful.”

Hoyt and her staff talk to schools, the Monroe County Health Department, potential housing sources, the Social Security Administration, and public welfare offices to help determine how many refugees can be successfully located in the area. Rochester receives around 1 percent of all refugees to the U.S.

Hoyt speaks at churches, libraries, community centers and wherever she’s asked throughout the area to raise awareness of the refugees’ plight. “One of the things we have to do is change people’s mindset’, she explains. She said it’s the mindset that thinks refugees are taking American jobs away and living here at taxpayer expense. “I’m not asking people to agree, but just to listen and keep an open mind. These people are taking low-level jobs no one else wants. We’ve had doctors take cleaning jobs because their license to practice medicine isn’t recognized here,” she said.

Fortunately, Hoyt’s message to the people has worked well enough to attract help of volunteers and donations, offering a hand of welcome most refugees have never had. Anyone wishing to volunteer or donate can contact CFC.

Unfortunately, Trump’s executive order had a deleterious effect on her paid staff, which had to be reduced as a result of the decrease in refugees allowed in the country. Hoyt expects only 500 refugees will be allowed to resettle here in 2017. The president’s January and March orders were subsequently struck down by federal circuit court judges and lasted only four months, but as Hoyt explains, the process of refugee resettlement “isn’t a business that can you can stop one day and re-start the next. There are a lot of pieces to this spider web.”

CFS is fortunate to have additional state funding sources for refugee resettlement and isn’t wholly dependent on the federal government.

Among the countries included in the ban were Syria, Bhutan, Burma, Somalia, Cuba, Iraq, Afghanistan and Ukraine. “The reality is that very few of the refugees have committed or will commit crimes,” Hoyt says. “It [refugee resettlement] is not dangerous to our country.”

To obtain refugee status, applicants must flee their country of origin and begin a two-year vetting process while living in a United Nations camp. The refugees have typically been living in unsanitary conditions without running water, been chased and hunted by militia, been hungry and malnourished and faced a host of other physical and mental challenges.

For those who successfully beat the odds to run the gauntlet to a new life here, CFS meets refugees upon arrival at the airport then provides a three-month resettlement period that includes school and employment contacts, housing, clothing and furnishings, English language classes and a case manager to help them adapt.

Successful assimilation factors include language, age, occupation and how much time spent in a holding camp. Having family ties here already is also beneficial. Some will wait 20 years or more for the chance to come to the U.S. Not every refugee will make it. “We can’t save everybody but we need to provide opportunities for those less fortunate than we are,” Hoyt says.

Today, refugee resettlement is still in a state of flux, Hoyt says. “We continue to receive arrivals although very limited,” she noted.

She recently received word from partnering agencies that the Department of Justice is giving authorization to begin booking all cases ready for departure and weekly quotas will no longer be enforced.

“I take that as good news,” Hoyt says. The 1976 Rush-Henrietta High School grad and longtime Brighton resident lives in Pittsford today with her husband and retired teacher, Mark.