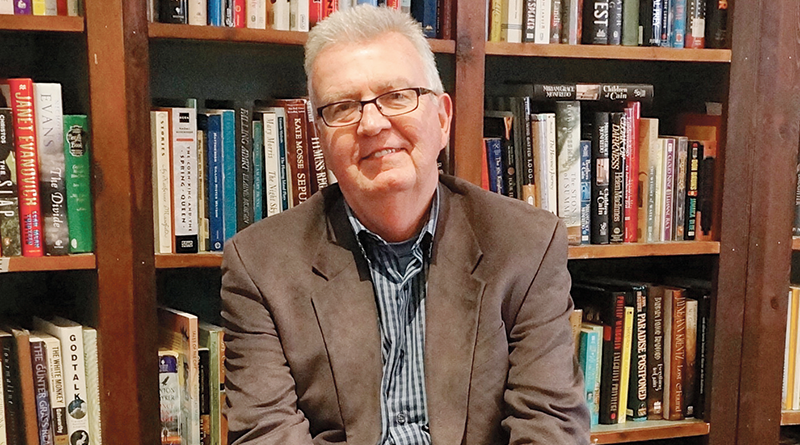 Joe Flaherty founded Rochester’s Writers & Books group in 1981, then worked at the organization for more than three decades. He is now gradually adjusting to new life as a retiree

Two years ago, Joe Flaherty wasn’t sure how retirement would suit him. After all, the esteemed founder and executive director of Writers & Books had spent more than three decades at the helm of Rochester’s distinguished literary venue.

But last year his perspective changed, and he decided to embrace retirement without expectation. To the people who know Flaherty, this is no surprise, because living without expectations is exactly how he has lived his entire life.

“I have the memories of the organization, but there’s now time for other things,” he said. “To be on the other side after all these years, it’s as if I was setting the table. Now it’s time for me to partake in the meal.”

Flaherty’s optimism comes from an unexpected place. After his father died, his mother placed him and his two siblings in an orphanage in Pennsylvania. He was just 3 years old. The boy spent his life growing up without parents — or expectations — but with other young orphaned residents, lots of structure and books.

“Reading was vitally important and I did it all the time,” said Flaherty, 70, of Rochester. “The books became my parents and I felt like I was learning so much more than from classes in school or textbooks. It eventually shaped what I did later on in my life.”

Running a literary arts organization in Rochester was not Flaherty’s childhood dream — he wanted to be a professional athlete. He was the tallest among his peers until eighth grade, when his classmates caught up to him in size. It was then when he embraced other possible ventures in his life.

“Nothing was fixed in my mind, I decided there’s a big world out there and I’ll eventually get to see it,” said Flaherty. “I just assumed it would be something to do with reading, like maybe becoming an English professor. Then my life unfolded into a wonderful path.”

After he graduated from Penn State in 1969, Flaherty made his way on that path. He moved to Rochester and obtained a master’s degree in photography from the Visual Studies Workshop. That’s where he met his future wife, Liz, and in 1975 the two of them took to the road — on a bus.

Indulging in his love of books, for four years Flaherty traveled on a regular basis up and down the East coast, driving “The Book Bus,” bringing the work of budding authors and poets into communities, from college campuses to fairs and festivals.

Backed by the Hudson Valley nonprofit publisher and photography magazine Aperture, where Flaherty was working at the time, The Book Bus helped support several small literary publishing houses. The endeavor was supplemented by grant monies from the National Endowment for the Arts and the New York State Council on the Arts.

“We went as far as Maine and all the New England states and along the Mid-Atlantic. We could introduce people to these small publishers and see a lot of interesting places along the way,” said Flaherty. “It was really eye opening.”

The experience helped Flaherty bring the concept of a unified literary organization to Rochester. The city was ideal because it was already supportive of the arts and could benefit from a center focused exclusively on reading and the sometimes discounted art of writing, he said.

In 1981, he opened Writers & Books in a one-room building on South Clinton Avenue. Its popularity grew so quickly that Flaherty moved the operation to a three-story, renovated police station on University Avenue just three years later.

For the last 35 years Writers & Books has supported writers through reading and writing programs. The center welcomed both new and seasoned authors to speak, teach and facilitate. He initiated Rochester Reads, a city-wide annual reading event and opened the Gell Writer’s Center, a dedicated writer’s retreat in the Finger Lakes. Flaherty also established his own publishing company, Big Pencil Press.

Nina Alvarez, an editor, publisher, writer and teaching artist in Rochester, praises Flaherty’s vision at Writers & Books in helping her build her own publishing enterprise, launch dozens of new authors, and even direct her own play.

“What you have to understand is Writers & Books can change lives. Not just for writers, but for those of us in the business of writing,” said Alvarez. “When I moved back home to Rochester in 2011, I was a freelance editor struggling to get by. When I found Writers & Books, I found a place to teach subjects I am passionate about, find clients I love, and meet some of the most intelligent and compassionate people in Rochester.”

In 1986, Writers & Books was named one of New York state’s “Primary Arts Organizations” by the state Council on the Arts — the only literary center to receive this designation. Today the nonprofit organization has more than 1,100 members.

Author Elizabeth Osta has worked with Flaherty on her own writing projects. She is the author of “Jeremiah’s Hunger” and credits Flaherty for helping change people’s lives from his ability to be both sensitive and sensible when it comes to creativity.

“Joe has a unique ability to listen and take what he has learned and weave it into something that benefits the community,” she said. “His spirit of trust and openness created an environment in which one could experiment and grow. It doesn’t get much better than that.”

That sensibility carried him through an unfolding mission to introduce people to literature through community programs. The experience came with plenty of surprises, he said.

Flaherty developed an infrastructure introducing new authors to audiences, and enjoyed when that author became, what he calls, a “big name.” He likened it to minor league baseball — introducing potential greats on their way up, like authors Ann Patchett or Terry McMillan.

“The early mission was very simple and broad — add literature as an art form to the cultural landscape of the community,” said Flaherty. “And then things happened you can’t imagine.”

He certainly did not imagine meditating at the Rochester Zen Center on Buddha’s birthday with iconic American poet Allen Ginsberg, who came to Writers & Books three times over Flaherty’s tenure — a memory he will always cherish.

But Flaherty has had many profoundly rewarding life experiences that could not imagine, like raising two daughters after growing up in an all-boys school as an orphan. Since he had never witnessed parenting nor was raised in a nuclear family, he wasn’t sure how well he would do at that job, but he succeeded. Both his daughters, now grown, are involved in the arts.

“It’s very rewarding to see my children becoming involved in the enterprise I started and wanting to be involved,” he said.

Flaherty’s wife Liz has also come a long way from her time on The Book Bus. She recently retired from teaching English as a second language in the Rochester City School District. Flaherty said she is helping him adjust to retirement and describes it like learning to drive an automatic transmission after having a manual one for so many years.

“It took me a good six months to relax into being retired, your body and your mind are used to doing something for 35 or 40 years it’s hard to shift into something else, you keep reaching for the gears, he said.

But Flaherty is also doing the things he put off because of his work. He and his wife are traveling, organizing old files and writing.

Staying away from social media and new technology, he reads the old-fashioned way, with book in hand. His current passion is detective fiction and is reading books by an Irish writer named Tana French.

“This next step in my life after retiring is as interesting and exciting as all the parts that came before,” he said. “I could not have imagined anything like this as a child.”