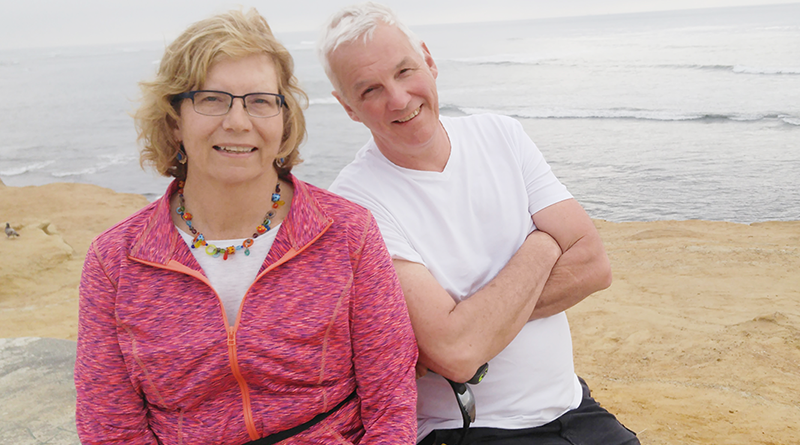 Through their earlier married life, one of them went off to a 9-to-5 job, while the other stayed home to care for their child and pursue artistic interests, like pottery.

Except in the case of husband and wife John Tracey and Martha Bush.

He was the stay-at-home caregiver, and she was the off-to-the-office corporate type. Decades of shared interests including music, the arts and community work, as well as raising their now 22-year-old daughter keep them going strong.

Tracey and Bush, 63 and 61, respectively, said while they may have taken unexpected roles, they each remained true to themselves and are still happy with their choices.

Bush, who recently became president of SIGMA Marketing Insights in Rochester after over 24 years with the firm, put it this way: “I’ve been the office type, 9-to-5 (or 9-to-9!). We didn’t think we could both have big careers when we thought about having a child. I don’t know how people do that. Many of my female friends and I waited a while to have kids. We charged off to go into whatever career. A few of us ended up in a similar situation, where the husbands had a more flexible kind of gig and the wives are more ‘straight ahead.’”

Tracey, whose hats include husband, artist, contractor and father, said when it came down to the choice, he’s happy with both the experience and result.

“Martha and I taking opposite roles got amped up when I played ‘Mr. Mom,’” he said. “Instead of sending our daughter Lauren to daycare, we decided that I would put my career on the back burner to spend that time with her. Martha had the 9-to-5 job with less flexibility. I’m in my art studio or doing one-man, part-time contracting work. That’s the lifestyle I’ve always lived.”

Bush is drawn to the arts more as an enthusiastic observer and supporter. “I love crafts and making stuff, but never thought I could be an artist,” she said. After college, she moved to New York City, where her “head exploded” with all the arts and music.

“I took it upon myself to learn about the art world,” she added. “I was making pennies, and I’d go to art openings and see amazing stuff and maybe even get some wine and cheese.”

Tracey’s entrée into the world of art was quite different. “I’d always leaned toward creative, ‘art type stuff,’” he recollected. “At my very parochial public high school in Niagara County though, I was the classic ‘bad boy’; constantly in trouble and being expelled. In my senior year, I found the art room. I liked it because you could do what you wanted. The real start was sitting down at a potter’s wheel. I was a natural. Within a week, I was better than both of the instructors.”

He headed to northern California shortly after high school, where he opened a studio and began producing a line of pottery to sell. “I did exactly what I’m doing now,” he said. “I was a part-time artist and a part-time contractor.”

Bush’s involvement in the arts expanded over the years. “We lived in Boston for a while, where the arts and crafts scene was booming. John was making ceramics, and we met tons of artists. It was very fun. I love being around creative, smart people in advertising and marketing. I’m as fascinated by artists as art.”

Her husband is one such artist. He now focuses more on his own work, which he differentiates from earlier days of making functional items.

“After 25 years of making pottery, which I enjoyed, I decided to start doing more sculptural-type stuff,” said Tracey. “Making pottery products was a way to find art while being able to sell something. That can become a trap: more of a job. Sculpture is making something that I really like — instead of making a hundred, making one. It’s more personal; more creatively fulfilling.”

Bush expanded her involvement further, joining the boards of nonprofit organizations like Causewave, the Memorial Art Gallery, and the Rochester Contemporary Art Center.

“In addition to making my life fuller, volunteer work helps communities survive,” she said. “It’s too much for one person, but if you get involved with one or two things, you can help. And, you get to meet such interesting people. I love hooking people up and making connections.”

Coming full circle, Tracey ruminated about the effect of his and Bush’s parenting choices. “While I was taking care of my daughter, some guys would say, ‘Wow, why couldn’t I do this?’ It was occasionally a little weird hanging out on the playground with all the moms. They’d say it was great; they wished their husbands would do it.”

The real effect became more evident when their daughter was in college at Harvard. “Lauren was studying sociology, and at one point said that she hadn’t realized how unusual her upbringing and lifestyle were,” said Tracey. “Many of her female friends were raised in traditional families, where the mom ‘wore the apron’ — cooked and cleaned and all that jazz. Because of Lauren’s upbringing, she tends to be more outgoing and assertive.”

These days, empty nesters Bush and Tracey work at their respective callings, and enjoy dining out and hearing live music. Bush has become an evangelist for her Fitbit, and loves walking for exercise and weight control.

“A couple of years ago, I put my foot down with myself and started walking,” she said. “I like hiking and cross-country skiing. I lost a bunch of weight and feel extremely strong and healthy. I walk and I walk and I walk. It’s like meditation, especially if you’re walking outdoors. You can just empty your brain. If someone wants to do it, I say try and change little things every day. If you try to change something big, it’s not going to work or you’ll get hurt. With walking, you can just go around the block — you don’t even have to change your clothes.”

Added Tracey, “We love going out to hear music, and do it at least once a week. There’s an active Americana/rootsy music thing happening in the Central Finger Lakes area, with a lot of talented musicians. We also go to one of our favorite restaurants, Han Noodle, at least once a week.”

Other activities may include “treasure hunting” at estate sales and auctions, said Tracey.

And they travel. Their daughter, who now works at an international branding company, lives in Princeton, N.J. They recently spent a week in California hanging out with her while she trained with the U.S. rowing team in hopes of an Olympic berth.

She is ambitious, hardworking and creative, Bush said.

Not a bad combination.