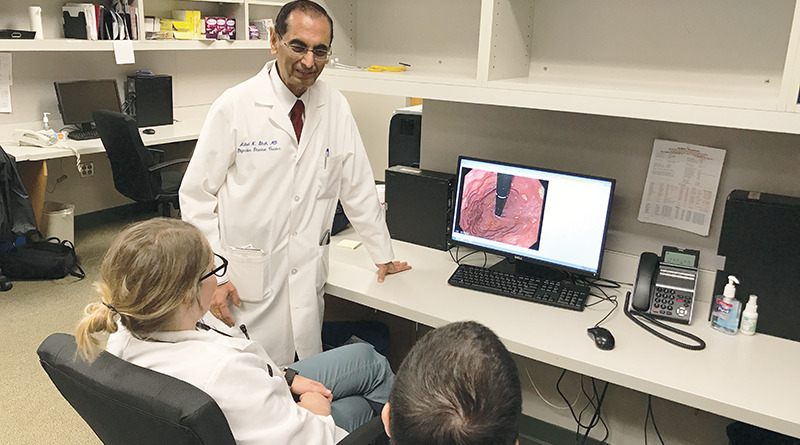 While many in the health field retire early for a variety of reasons, some practitioners continue working long after the standard retirement age.

One of them is Ashok Shah, professor of medicine emeritus for University of Rochester Medical Center Gastroenterology and Hepatology. He practices at the Center for Liver Disease in Rochester. He said that enjoys sharing with younger physicians the wisdom he has attained since 1973 — that’s more than 40 years ago, when he started his medical career.

“They have youthful enthusiasm and I have the wisdom,” Shah said.

Shah biggest changes he has observed over his impressive tenure as a physician include a lot of interference by insurance companies, government and the hospital associations. “There are more and more rules we are to follow,” he said.

He recalls a time when physicians prescribed whatever drugs would ideally help patients, but now, health insurance coverage determines what he prescribes. Many kinds of medications are so expensive that many patients cannot afford it out-of-pocket. Diagnostic tests also come under insurance company scrutiny.

“Outsiders are now making the decisions, not the doctor and patient,” said Shah.

But Shah has seen many positive changes, such as more effective treatments and more accurate diagnostic tools. Both add up to better patient care.

When not treating patients, Shah enjoys pursuing comparative religion and philosophy. He and his wife of 50 years, Shobhana, have a son and daughter.

Daniel Biery, gastroenterologist with Ontario Gastroenterology Associates, has practiced medicine 39 years. He also said that additional regulations in the past decades have dramatically affected health care. Lower reimbursement has also altered how health care is delivered, with less hands-on care provided by the physician and more through nurses and physician extenders.

The septuagenarian is pleased about how during procedures such as endoscopy, patients receive more frequent vital sign checks than they used to.

“Vital signs are taken prior to even starting anything and then every three minutes throughout the examination,” Biery said. “It’s not just blood pressure and pulse, but also oxygen blood levels and EKG tracings. After, we keep them for half an hour to 45 minutes, also monitoring their vital signs.”

Though he never encountered any problems in the old days, he views the extra vigilance as a “good change.”

He has also noted that the number of subspecialties has increased in the past few decades, and that more and more surgeries have become minimally invasive, which means patients spend less time in the hospital and experience a reduced risk of infection.

Biery views his maturity as an asset for practicing medicine.

“Medicine is a science, but it’s also an art,” he said. “As a mature physician, you may have seen this issue that’s presented to you eight or 10 times in the past and you know just form your past experience which direction to go, how serious is it, how much investigation to do. Sometimes, less treatment is better.”

He attributes his longevity to taking care of his own health and selecting an area of medicine he loves. In February Biery announced he was retiring.

Alex L. Strasser, another senior medical provider, operates a solo practice on Browncroft Boulevard in Rochester. He has worked as a physician for 49 years. He shares the same positive outlook on practicing medicine as Biery and Shah.

“I like the interaction between doctor and patients and like listening to patients and helping them,” he said.

He, too, feels that the government and health insurance companies wield too much power over patients’ health care.

“When I started the practice and we admitted a patient in the hospital, we kept the patient as long as it was medically correct,” he said. “Now the No. 1 factor is cost control. The admitting physician and the hospital employees are pushed to be economically sound to get the patient out of there sooner.”

He attributes his longevity in medicine to the ability to run his practice the way he wants. He still talks with patients in a consultation room, performs the examination in an examination room, and then consults in the first room again. He said the process is “from the old days.”

Though Strasser calls practicing medicine “a privilege and honor,” he referred to his wife and son as “my love and life.

“I’m happily married to a fine lady and have an interest in something beyond the family. That is why I’m not going to retire. I love what I’m doing so why should I retire?”