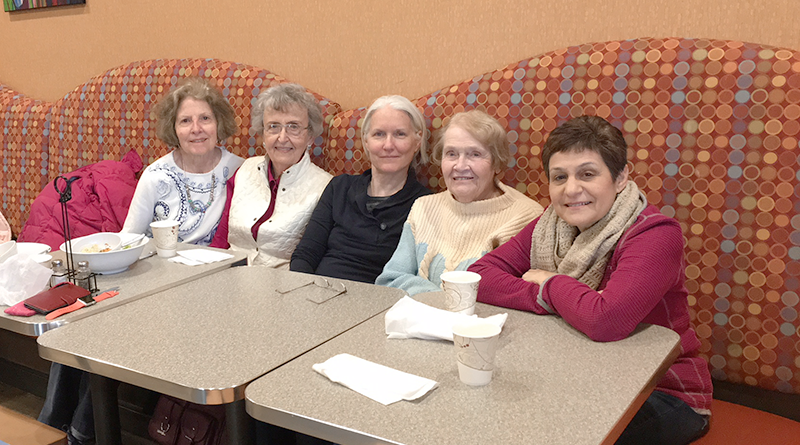 They met at the gym in Pittsford by chance about 12 years ago. They developed a friendship — and a workout regimen — that remains to this date

Elaine Horesh, 65, of Fairport loves working out at the gym and is devoted to her exercise program.

“I go about three times a week,” she said while discussing gym attendance with several of her friends.

Suddenly, friend Joan Blair, 87, of Brighton cut Horesh off before she could continue with her remark.

The table exploded into laughter at Blair’s tell-it-like-it-is comment. A quick and hilarious back-and-forth discussion of how many times a week everyone works out ensued.

Anne Parker, 78, and Jane Dieck, 88, both of Pittsford, and Patricia Denham, 56, of Penfield met Horesh and Blair more than 12 years ago at the Rochester Athletic Club in Pittsford. Each went for her own reasons and each came at the very early hour of 5:30 a.m. For a while they quietly did their own exercises, but over time they began to gravitate to each other. Blair noted Parker really brought the group together.

“Anne was very, very friendly and always introduced herself to everyone. We were the older ones at the gym. We still are!” she said.

Denham was the last to join the gang and said she was drawn to the commitment to health and wellness she saw in the other ladies. “I just started hanging around. I sort of nosed my way in,” Denham said.

From then on they met regularly to get their morning workouts done together before they went about their days.

Each of the “Five Girls” has a very different life, but their shared goal of maintaining their health and fitness through exercise as they age has helped them develop a special connection.

Parker worked at Talbots for 25 years before retiring. Now she works in the kitchen at Barker Road Middle School in the Pittsford Central School District.

She exercises almost every day and takes classes, lifts weights and does balance exercises. When she can’t make it to the gym, she uses her NordicTrack at home. “I just love it,” she said. When she isn’t working out, she loves taking photos and socializing with her many friends.

Horesh enjoys her early morning workouts, too, but admitted that lots of people “think you’re crazy to get up at 5 o’clock to go to the gym. But it is so much easier to go and get it over with. You get an hour in and you’re done for the day. I wish I could do more.”

After working out, she goes to work as a sales coordinator at Hawn Heating. She also does shipping for her son’s Buffalo business, Oxford Pennants.

When Rochester Athletic Club first opened, a friend persuaded Blair to join her on a visit. The friend never signed up but Blair has hardly missed a day since. Before retirement, Blair spent many years as a secretary while also raising six children and one of her nephews. Today, she makes sure to spend some time on the stationary bike or the treadmill before heading to daily mass.

She said working out and keeping in shape helps ease her arthritis and keeps her limber for bowling. She has been on the same bowling league for over 50 years.

Dieck raised four children and worked in designer fabrics for over 20 years before her retirement. She is an avid community volunteer and has been delivering Meals on Wheels for 47 years. When she broke her hip last December, her doctors were impressed with her overall fitness level and strength of her bones. She credits her workout routine for making this difficult time just a little bit easier.

Doctors assure her that she is well on the way to a full recovery. She is eagerly waiting for the day she can get back to the gym.

Denham is an art therapist and credentialed substance abuse therapist. Her job can be stressful as well as emotionally taxing, and her workouts help keep her energy and mood elevated. She said exercise makes her “feel like my body is not aging as fast.”

Denham doesn’t make it to the Rochester Athletic Club anymore since she moved from Rochester to Penfield, but she does make time to get together with her longtime friends.

Even though differing schedules sometimes makes it difficult these days for all members of the “Five Girls” to go to the gym together every day, they are deeply committed to the friendship they’ve developed. When they don’t exercise together, they make time to meet for coffee and chatting. Horesh pointed out that they “do a lot of kibitizing!”

The emotional bond they’ve developed was evident when Parker told her friends that her husband had died suddenly just a few weeks before.

Horesh, Denham and Blair gathered around Parker and offered hugs, support, and genuine love to their longtime friend. Through the sadness, though, there was lots of laughter and gentle ribbing. All four said how they missed Dieck, who was home recuperating from her fall. Denham then pointed out that it was the date of the second annual Women’s March in Washington and all around the country. The year before, Dieck made the trek to Washington to attend the march and lend her voice to the many others rallying for gender equality.

Horesh, Denham, Blair and Parker beamed as they told the story of Dieck’s trip and said how excited and proud they were of their strong friend.