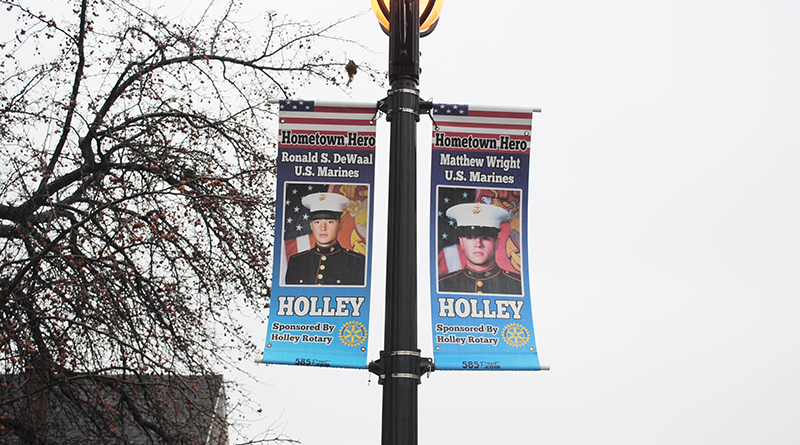 Holley, a small rural community 35 miles west of Rochester, was like thousands of small rural towns across America during the 1960s and early 1970s.

With a population of about 1,800 at that time, it was a place where everyone knew each other.

Patriotic to their core, the town’s families sent their sons to serve their country in Vietnam.

But eight of those young men never returned home, making the ultimate sacrifice for their country. It was not only a devastating loss for their families, but for their small hometown and for their school, Holley High School, which at the time, had an average graduating class of 30.

It is believed that Holley and the high school suffered one of the largest per-capita casualty rates in the Vietnam War.

Author Michael T. Keene, a Pittsford resident and Vietnam veteran himself, tells the story of these eight young men and the town of Holley during this era in “Vietnam Reflections: The Untold Story of the Holley Boys,” through recollections of their friends and family members and even letters from the boys themselves.

The book, published in 2017, is Keene’s seventh. It is also available in audio version, with the letters being read by actors about the same ages of the soldiers, adding even more poignancy to the story. 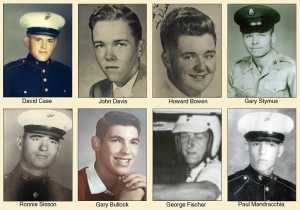 The creation of the book began appropriately enough, one Memorial Day several years ago, when Keene visited the Vietnam Veterans Memorial of Greater Rochester, located in Highland Park, which is dedicated to those service personnel from the area who died in Vietnam.

The plaques depict the soldiers’ names, branches of service, birth and death dates, and the high schools they attended.

Keene was taken aback with that such a high number of casualties had been from Holley High School.

“Simply, this town had suffered an inordinate tragedy, and I thought there was a story to tell there,” he said. “I thought it was a remarkable story, just on the level of what happened to these eight boys. I found something equally remarkable, which was the town itself.”

Fast-forward four years. Keene was on the road to a speaking engagement to promote one of his earlier books when he saw a sign that reignited the idea that these boys’ story should be told.

“I’m on my way to do a talk on this Erie Canal book, which took me through Orleans County,” Keene recalled, “and I saw a sign that said, ‘Holley — 3 Miles.’ In that instant, I realized what I was going to do. It was that quick, that I would attempt to track the surviving family members, neighbors, military buddies of these eight boys, and I would interview them and I would write a book about it.”

He began the research with a great deal of help from town historian, Marsha DeFillips, who had known all eight boys. From the boys’ obituaries, Keene had their siblings’ names. He composed a letter and sent it out to 12 people who had the same first and last name and lived in the general area of Holley.

A few days later, he got a phone call from one of Howard Bowen’s sisters, and that was his first breakthrough.

“What was fascinating to me was how I found these people,” he said. “I found 35 of their surviving brothers, sisters, neighbors and military buddies. Once I found the first one, that led me to the second, to the third, and to the fourth.”

Keene gathered their stories and memories, combined with photos, letters, and after-combat reports, and dedicated a chapter in the book to each boy.

Keene also shared some of the boys’ family histories, to offer a more complete picture of the boys and of the town in which they grew up. Some of the friends’ and family members’ remembrances are especially moving. For example, of the death of his buddy, Ronnie Sisson, Duane Good said that it ended his life of innocence.

To add more perspective to the boys’ stories, Keene has included chapters on various battles of the Vietnam War.

“My sense is that the Vietnam war has faded in memory for a lot of people, and for many people they really don’t know what it was, how it got started, or how it ended,” he said. “I took what I thought were the key turning points of the war and wanted to intermingle them with the stories of the boys.”

Even after the book came out last year, Keene has still been hearing from friends and family members. He recalled that several people contacted him, claiming to be George Fischer’s best friend, and he didn’t doubt that each one of these guys believed he was Fischer’s best buddy. “When you come to learn about him, he just had an incredible impact on the lives of other people,” Keene said.

One of the more interesting contacts, Keene said, was the email he received from Kim Stymus, a daughter of Gary Stymus, who was killed in 1967, when Kim was 2 years old. She had asked if Keene had known her dad; he hadn’t. “But I told her, she could have some consolation knowing that her father would now be remembered and honored,” he said.

Keene felt a great responsibility in telling these boys’ stories.

“I was being contacted by people and family members,” he said. “The experience I had was tremendous. Not only did people want to talk, they had to talk. I can’t tell you how many people told me that they had never talked about their feelings about their brother dying.”

But Keene had come to learn that it was not just the families and friends who mourned these boys’ deaths — it was the entire town.

“They had suffered through this tragedy. It’s not like there was an accident and eight people died in the accident, and time marches on, and the incident becomes more and more remote,” he said. “But here was a slow-motion tragedy that occurred over about a six-year period. And everybody in town knew everybody else. So everybody went to every funeral.

“The town had never really grieved collectively. In fact, with returning veterans, no matter what war, the issue of post-traumatic stress syndrome is often brought up. I believe I found a town that was suffering from it, if you will.”

Holley residents may have found some peace from this book. Marsha DeFillips, the town historian, said the town’s response to the book has been fantastic, and turnouts to the book signings were well-attended. There were tears, she said, suggesting though, that the tears were of joy. Perhaps, she said, “because the boys were being remembered.”

Today — some 50 years later — Holley’s patriotism still flies high, and it still holds in its heart the sons and daughters who serve in the armed forces.

Hanging from lamp posts along Route 31 through the downtown area are banners, sponsored by the Holley Rotary, which honor local men and women in the military, with their photos, names, and the title, “Hometown Hero.”