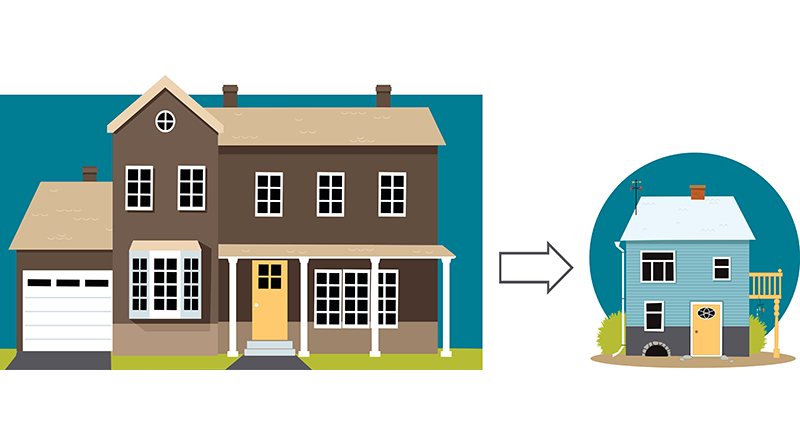 The ups and downs in the downsizing process

I always thought downsizing was going to be a breeze. I don’t know why I thought that, because my parents never made the leap, but the word itself suggested “ease” to me, a pared down way of living.

I imagined the process would take but a few months. My husband and I would easily find a ranch that needed a bit of updating; we’d put our own house on the market and it would quickly sell; we’d reduce all our stuff; pack; and then make the actual move. One, two, three; a walk in the park.

Well, it has not been the breezy walk in the park I imagined.

Indeed, our downsizing journey has been a highly unusual one; but, uniqueness aside, I believe there are aspects to downsizing that are universal.

For starters, we could not agree on a house, other than we wanted it smaller. While I was good with many ranches in older neighborhoods, my husband preferred a more unique setting. And so we searched for nearly five years, all the while readying our own house for sale. Though trying at times, I don’t think we’re alone here in our prolonged search. Since the downsized house most likely will be your “final” house, it’s important that you both really like it.

Here’s where our journey takes an unusual turn: We found a foreclosed house that met many criteria — smaller, nice layout, great location — except one: it was a disaster inside. We discovered this unfortunate fact by walking around the perimeter and peering in any window we could.
Naturally, we asked ourselves: Did we have the energy to take on this monster project?

I mean, we’re no longer spring chickens, if you catch my grizzled drift. If one of us isn’t releasing the sigh heard ‘round the world, the other is complaining about an aching back. Plus, we’ve come to like our quiet time and routines. “Look, a chickadee at the feeder!” “Oh, lovely, my day is now complete.”

Back and forth, back and forth—could we? should we?—until, finally, one day we decided to go for it and bought the house.  That was a year ago and we are finally ready to move in.  What took so long?  Well, we encountered a variety of obstacles and challenges — from warped wooden floors to clogged drains to a lawn that could float a boat.

Plus, renovating and decorating a house when you’re both older is more complicated — and that’s something to consider when you decide to downsize.

For example, we built a house when we were in our 30s and had two young children. At that time, I don’t recall laboring over every decision. The builder suggested the majority of design details and we just went with it, from cabinets to doorknobs to trim.

Thirty years later, we each have honed what we like in a home; and while we agree on many details, we don’t agree on all. Translation? Expect some ups and downs in the event that you have many design decisions; expect to compromise; understand that you may not get your man-cave with the 65” TV or your she-shed with the deep soaker tub.

We’ve also spent the year making sense of the contents of our current home, all the while acknowledging that our downsized home has much less storage space.

Let me tell you, it’s not easy dealing with stuff, especially if you’re a sentimentalist (like me) and particularly if your kids don’t have homes of their own yet (ours don’t). Throughout the culling process, I have continually asked myself: “Will the kids want this someday?”

On top of the kids’ stuff, I’ve also had to deal with my own stuff: clothes, shoes, framed photos, decades of greeting cards, hordes of hair products, and more.

Honestly, it’s kept me up at night: What to do with stuff? And, mysteriously, despite my donations and tossing and giving stuff away, it kept (and keeps!) accumulating.

Purging is a good thing; and downsizing demands it. Since moving, I’ve purged again, letting go of all the things I was on the fence about but now, clearly, have no room for.

What has helped me with both purges was recalling how difficult and time-consuming it was to clear out my parent’s loaded house, and that I did not want to pass along that task to my kids.

The smaller house turned out well, and we are slowly finding our way. It’s a big adjustment though — living in more confined quarters and not having the privacy we each once had. But that’s to be expected with downsizing. On the up side, tighter living space means closer contact. Who knew that flossing, side-by-side, while watching chickadees at the feeder could ever be so entertaining?

Anne Palumbo writes the column SmartBites that is published monthly in In Good Health Rochester Healthcare Newspaper. To contact her, email avpalumbo@aol.com.