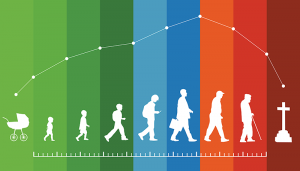 I was startled recently when a friend I had not seen in about 10 years told me that I was “aging gracefully.”

What does that mean?

I find “aging gracefully” and phrases like it can have any number of meanings. Of course, I could have demanded to know what my long-absent friend meant, but I felt that this might put him on the spot, so I remained silent.

I asked about a dozen of my senior friends how they would react if someone they hadn’t seen in a decade told them that they were “aging gracefully.” About half said they would take it as a compliment, but the other half thought it was a secret code for “you got a lot older-looking from the last time I saw you.”

I started quizzing myself about this phrase, one that I have heard dozens of times but never before pondered its implications. I thought my mother aged gracefully until age 90 when she became ill. When it comes to well-known Hollywood actresses, I would label Helen Mirren, who at 72 is about six years my junior, as one who is “aging gracefully.” She does not seem to use extreme means to fight off Father Time, while exuding an elegant, natural appearance.

Some men and women are obsessed about their looks, and they fret constantly about wrinkles or other manifestations of age. They spend enormous amounts of money trying to find products to slow down the aging process. No wonder 16th century Spanish explorer Ponce de Leon and countless others after him were fixated about finding the “Fountain of Youth” or some elusive magic potion that would fend off the aging process.

Some friends in their mid- to late-50s are in this category. I envision them perched on a big clock in the town square, struggling with all of their might to hold back the hands of time, but, try as they might, it is futile.

Best-selling author Nora Ephron waded into the conversation in her book, “I Feel Bad about My Neck.” She observed that “our faces are lies, and our necks are the truth.” She joked that although you have to cut open a redwood tree to see how old it is, if the tree had a neck, it would readily give away its age.

Last November, one of my alleged friends cautioned me to be careful. “Someone might mistake you for a turkey and have you for Thanksgiving dinner,” he said, pointing to the flabby skin under my chin. Very funny!

Growing old is a study in contradictions. Several of my contemporary Oswego friends rejoiced in all of the trips they took during 2017. In their annual Christmas letter, they described these far-away places with the strange-sounding names that they had visited.

On the other hand, a 75-year-old friend from Fulton said he has thrown in the towel on travel. “It’s too much of a hassle,” he announced. “Besides, I just love to stay home and watch the world go by on TV.”

I find I am cramming in as much travel as I can, sometimes leaving myself exhausted. I rationalize that I have an unknown number of “good years” left, so I want to visit some bucket-list locations while I am still mobile. Last year’s Alaskan cruise with my youngest son was challenging because of some of the wilderness hiking during off-ship excursions, but I did them without regret.

An old high school buddy with whom I have lunch about once a month and I were discussing how much driving adds to our mobility and independence.

During our conversation, I wondered whether we would recognize when it was time to hang up the keys, or whether one of our children would feel compelled to give us “the talk” to convince us that our driving was putting ourselves or others at risk. Then, if we protested and refused to turn in our keys voluntarily,would they threaten to notify the Department of Motor Vehicles to force us off the road?

My deceased wife, who was afflicted with stage four ovarian cancer, would lament periodically that “getting old sucks.” There is no question that getting older contains physical and emotional landmines. While aging gracefully isn’t easy, a person’s attitude matters considerably.

In talking to Web MD, Susan Whitbourne, professor of psychology at the University of Massachusetts-Amherst, said our society is obsessed with the negative aspects of aging.

She cautions seniors not to fall into a trap with all the “bad press” about aging. “Once you start thinking about it, it can drive you mad,” she said. “There’s nothing you can do; the clock is going to tick away.”

Not only are wisdom and mature understanding some of the prizes of a longer life, but growing old itself earns a gold star. “If you get to be older, you have survived a lot of the threats to your physical and psychological integrity that have affected other people who are no longer around,” Whitbourne said.

‘To age gracefully, you need to have the proper mindset to recognize the changes that are inevitably coming. Rigid thinkers tend to get overwhelmed by aging, can’t manage the changes, then wind up depressed.’

She said we should not be lamenting, rather congratulating ourselves that through good luck or good genes, or both, we have dodged fatal accidents, premature disease and other afflictions that kill young people. “You are stronger, and you get to live longer,” she said.

Whitbourne also said, “The people who do the best with aging aren’t thinking that much about getting older. If you sit around mulling over how time is running out, you’re not going to age as successfully.”

The sooner we realize that aging changes everyone, the better we will be able to cope with this reality. At, let’s say, 85, most of us are not going to be able to do the things we did when we were 65, or, if we can do them, we won’t do them as well.

You may not be living on your own any more in a beautiful home or apartment or driving to the supermarket or walking a mile or two in the park.

To age gracefully, you need to have the proper mindset to recognize the changes that are inevitably coming. Rigid thinkers tend to get overwhelmed by aging, can’t manage the changes, then wind up depressed.

Those who deal with aging more successfully are those who can anticipate what is happening and who are determined to work their way through the maze of challenges confronting them.

I want to be in the latter category; how about you?