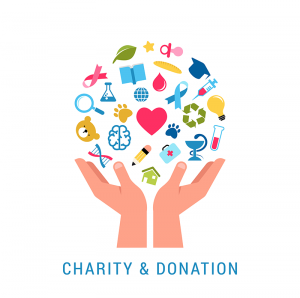 Last issue, we reviewed many of the provisions in the new federal legislation relating to personal income taxes. This time around, we focus on how long-standing tax advantages associated with charitable giving are impacted by the new rules.

First and foremost, charitable gifts were fully retained as an allowable itemized deduction. Further, the upper deductibility limit of gifts of cash and other “ordinary-income” property was increased from 50 percent to 60 percent of adjusted gross income (AGI). Gifts exceeding that limit can continue to be carried forward and deducted for up to an additional five years. Also unchanged is the qualified charitable distribution (QCD) method for transferring gifts directly from an IRA to charity for taxpayers age 70-1/2 and older.

Most of the other itemized deductions were negatively impacted.

Limitations were placed on the deductibility of mortgage interest, so-called SALT (state and local income, sales, and property taxes) deductions are now capped at $10,000 total. Miscellaneous itemized deductions are now history. The only other deduction treated favorably was the medical deduction. Its threshold was temporarily reduced to 7.5 percent of AGI for 2017 and 2018, rising back to 10 percent in 2019.

Because charitable deductibility was treated so well, one might conclude that all is good on the charitable giving front. Unfortunately, that is not the case.

Given the combination of a much-higher standard deduction and much-more limited itemized deductions, it is expected that some 90 percent to 95 percent of taxpayers will now elect the standard deduction, saying good-bye to the dollar-for-dollar reduction in federal taxable income previously afforded by charitable donations.

Fortunately, even with this strong headwind, there are still some workarounds to be had.

Qualified Charitable Distributions (QCD) from IRAs. This is a tax-advantaged method for charitable giving that can override the standard vs. itemized deduction dilemma. Tax-wise, it is the preferred method for giving when the taxpayer:

– Does not need some or all of the IRA required minimum distribution (RMD). In this case, one should direct some/all of the RMD directly to charity regardless of whether the standard or itemized deduction is taken, or

– Directs distributions to charities over and above the RMD but only when taking the standard deduction. If itemizing, gifts of cash or appreciated securities are preferred.

QCD distributions are not taxable. Using QCDs partially or fully to satisfy RMDs reduces AGI, which can be favorable for reducing Medicare premiums and taxability of Social Security, among other tax-related benefits.

The annual maximum is $100,000 per taxpayer, not limited by AGI. You cannot be under age 70-1/2. Employer 401(k) plans are not eligible distribution sources, and donor-advised funds cannot receive QCDs. QCDs cannot be deducted.

This involves alternating the years in which the standard deduction and itemized deductions are taken for gifts of stock or cash. Charitable donations are made in the itemized-deduction years. To smooth out gifting to the receiving charities, one can use a donor-advised fund as the intermediary charity, then arrange for a more-even year-to-year flow of donations to the ultimate charities.

‘Because charitable deductibility was treated so well, one might conclude that all is good on the charitable giving front. Unfortunately, that is not the case.’

Gifting Appreciated Property/Securities. This option was retained by the new tax legislation and is a favored tax-advantaged method for giving regardless of whether or not a deduction is taken. This is because neither the taxpayer nor the charity pays tax on the unrealized capital gain. The higher the unrealized gain the better!

Timing is important. If a donor is nearing end-of-life, the advantage of making this type of gift diminishes since the cost basis will step up anyway at death. This gift remains limited to 30 percent of AGI in any given year with the ability to carry over to up to five subsequent years.

Non-QCDs from IRAs. Taking non-QCD distributions from IRAs to fund charitable gifts is generally never a good idea, even when deductible. Doing so increases AGI which can have a number of negative consequences.

Because of the expected significant decline in taxpayers choosing to itemize, the jury is still out on whether charitable giving will be negatively impacted. We believe any impact will be small.

Consult with your tax professional and financial planner to determine how best to adjust your charitable giving strategy to achieve a win-win for your favorite causes and for yourself.

James Terwilliger, CFP®, is senior vice president, senior planning adviser at CNB Wealth Management, Canandaigua National Bank & Trust Company. He can be reached at 585-419-0670 ext. 50630 or by email at jterwilliger@cnbank.com.