I think my wife has decided she doesn’t need me anymore.

And you might ask, “What took her so long?”

The signs have been there for a while, but at Christmas, the proof spilled out on the floor, a gift from one of our kids.

My wife had asked for a bedwarmer, a cover you put on the mattress and then plug into the wall. You turn it on at night and it warms the sheets and the wife sleeping on them.

I looked at that thing under the Christmas tree and said to myself, “Wait a minute, I’m the bedwarmer in this house.”

At least I thought I was.

People who know my wife and then get introduced to me almost always say, “How come she agreed to marry you?”

I fall apart in most of those categories. I know that. So for many, many years I’ve had an answer when someone asks the question about why my wife would have ever wanted to marry me.

“My hands and feet are always warm,” I tell folks. “That’s why she married me.”

The first night we spent together in the same bed, I got in on my side and gave myself lots of room. Gayle got in on the other side and as soon as the lights were out, there was this shuffling and bustling under the covers. She was moving herself all the way across the bed to be right next to me.

In my youth, I thought she was motivated by love and passion to be nice and tight next to her hubby.

Very soon, however, I learned she was motivated by warmth. Her hands and feet are always cold, and I was the hottie who would make the evening in the sack pleasant just by the fact that I was there throwing off all that heat.

And so it was for many years and many cold nights.

My love had decided that warm as I was, a bedwarmer was nicer. That, of course, meant that she didn’t need me. I could sleep in the back of my car in the garage; she would still be kept warm by an electric device. She didn’t have to put up with the noises and vapors and bed-rumblings that go with a husband. All my charms were now dust.

I went along with the bedwarmer. Sleeping on the sofa or in the garage was not on my list of desirable options; in fact, I had no options.

And on the first night with the electric warmer under the sheets of our bed, I found out there were terrors to face.

This particular brand of bedwarmer has a set of switches in a little console so you can turn it on and off and set the temperature. In the dark, it looks like the face a Japanese monster from a video game. That was odd.

But that wasn’t the nasty surprise. In the deep darkness of our bedroom, the warmer casts shadows on the ceiling you don’t see right away. I found this out the hard way the second night we slept with the warmer on. I woke up and there, on the ceiling, was a blue-green monster snarling at me, eight feet above my head.

“What the hell is that??!!” I asked myself and my wife out loud as I jumped out of the bed.

In the darkness, I also noticed that despite the whole ceiling being lightly illuminated, one portion was deep and dark, like a hole in our ceiling that went right into the night sky. That hole was on Gayle’s side of the bed, not mine.

“That’s her escape,” I thought to myself.

“What is that thing on the ceiling?” I asked myself again, now totally awake.

I sat up. I got out of bed and stared at the snarling face. Then I realized some of it disappeared as I moved. I was standing between the light source and the projection on the ceiling.

That’s when I realized the ghostly face on the ceiling was being thrown there by this little bedwarmer console. I put my hand over it and looked up, the face was gone. I took my hand away and there it was again. I could never figure out what the dark hole was.

When we went to bed the next night, I asked Gayle if she had seen the images on the ceiling.

The lights were out. The bedroom was dark.

I realized we had to be asleep for a while to have our eyes completely adjusted to the dark to see the images…and I wanted her to see them so she knew my brain hadn’t been toasted by old age.

So I made a quick plan.

“I’ll wake you in a couple of hours so you can see the stuff on the ceiling,” I told her.

And I could feel her arm reaching behind my head to touch the console, turning it up to “Broil.”

Then I knew I wasn’t needed anymore… 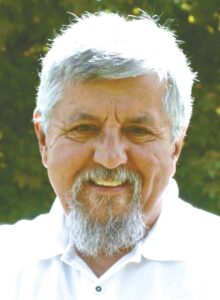