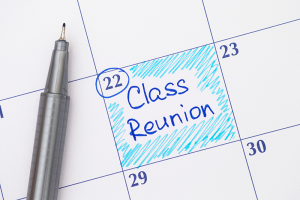 My high school class of 1957 celebrated our 60th-year reunion in May, a bittersweet time filled with pleasant memories but also regret that 13 of our class members are no longer with us.

Ours was a small class — just 42 — at a time before consolidation of local school districts into much larger regional units in Pennsylvania. The high school had just three grades back then — seniors, juniors and sophomores; ninth-graders went to junior high school with the eighth- and seventh-graders. There was no such thing as a middle school, which grew in popularity starting in the mid-1960s.

Our small community had only about 5,000 residents and had been losing population ever since the anthracite coal mines began shutting down a few years earlier. Because there were few employment opportunities in our area after mining petered out, workers had to seek jobs in more metropolitan areas; many moved to New Jersey or other nearby states, where job opportunities were more plentiful and career advancements more likely.

My parents ran a small grocery store that gave them a decent, if not opulent, living. When you have a grocery store attached to your home, you can always count on being well-fed, even if you don’t have a lot of money in your pocket.

When I was elected class president in our sophomore year, I did not realize that the term was in the same category as U.S. Supreme Court justices — for life. We have had class reunions every five years until three years ago. We had so much fun at our 55th that those in attendance clamored for one between that one and this one. I thought it would be catchy to have a 57th-year reunion for the Class of ’57.

Starting with our 50th-year reunion, we have had luncheons rather than evening events. Most of us old folk don’t much care for driving at night, especially if we have a drink or two. We also have them on the Thursday prior to Memorial Day since some classmates who moved out of the area return to spend time with family for this holiday.

The centerpiece of any class reunion is catching up with friends whom we haven’t seen since the last reunion. It is always a treat when a class member whom we have rarely seen at reunions shows up.

Despite our efforts to involve not only those who graduated in 1957, but also those students who went to school with us but dropped out before graduation, there is still a handful who have never attended even one of our 13 class reunions.

We send out a mailer with information, and in the mailer there is a self-addressed stamped envelope for replies with a deadline. If we don’t get a reply by the deadline, members of the reunion committee call the non-responding classmates to persuade them to join us.

One of our classmates who has never attended told a reunion committee member three years ago “don’t bother me anymore; I am not interested.” This reminds me of an Oswego friend whose class some years ago was celebrating its 50th-year reunion. “I guess you’re excited about going to your 50th,” I said to him. “I’m not going,” he said, with a certain amount of indignation. “Why the heck not?” I asked. “I didn’t like those bastards when I was in high school with them; why would I go out of my way to be with them now?” he replied.

We always make it a point to honor our deceased classmates with a brief program in which we mention their names and light a candle for each. We also have a program that deals with reminiscences of our high school days or the history of our hometown.

My granddaughter asked her friend’s father what went on at class reunions? I chuckled at his response: “You spend money, you’re nervous, and people try to lose 20 pounds in the months prior to the reunion.”